Picnik was an online photo editing service known for being simple and easy to use.

It was quite popular till it was acquired by Google in 2010. It has been popular as it was liked by 9.5 million users on Facebook [1]. It was headquartered in Downtown Seattle, Washington, United States founded by three people- Jonathan Sposato,Darrin Massena and Mike Harrington. It was one of the first sites to bring photo editing to the cloud.

How it worked? Picnik enabled users to upload photos form web or from their computers. Editing on picnik allowed to crop,re-size, adjust colours or do touch-ups and add cool effects to photos, all without leaving the web browser. You could all that using the online controls. Picnik was popular for its unique feature of personalization. You could add and play with the pictures. You can create fun special effects such as superimposing flowers or mustaches over your image. It also enabled making your images look elegant by adding drop shadows, artistic effects, and unique frames. 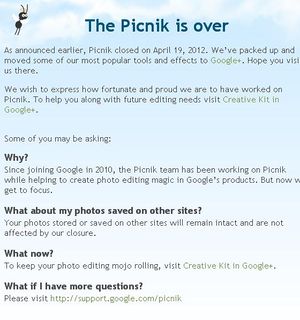 picnik
It’s being rolled into Google+. Many questions regarding the picnik were available at Google.

Google in association with the Picnik staffers tried to create photo-editing magic across Google products. In the post to its site, Picnik cast the move in a positive light: “Since joining Google in 2010, we have been creating editing magic in Google products while continuing to keep Picnik awesome. But now we get to focus on even awesomer things,” the post reads. To smooth the transition to Google+, Picnik has added a feature called Picnik Takeout that downloads images to the desktop as zip files. Photos can also be copied to Google+, where they can then be stored and shared. Picnik also informed its premium members that they will be refunded as a result of the change. And until the site closes, all members can be granted access to its premium privileges for free.[2]

Alternatives to Picnik Google has Though picnik was closed there are alternatives available to edit the pictures [3].

Back to Unit 2.4 Homepage
Retrieved from "https://wikieducator.org/index.php?title=Picnik&oldid=788787"