A. Concept of OS computers are now affecting every sphere of human activity and bringing about many changes in industry , government, education, medicine, scientific, research, law, social sciences and in arts like music and painting .they are presently used ,among other application, to:

The areas of applications of computers are confined only by limitations on human creativity and imagination. In fact any task that can be carried out systematically, using a precise step by method, can be performed by a computer. Therefore it is essential for every educated person today to know about a computer, its strengths, its weakness and its internal structure. 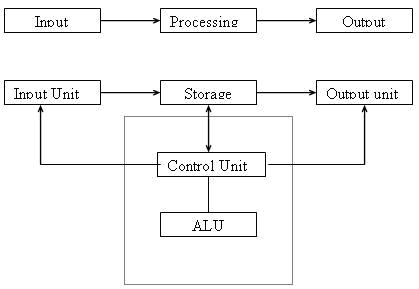 Computer is a electronic machine which accept input and produce output by followed some instructions (programs). Following diagram shows a logical structure of computer.

The user interacts with the operating systems through the user interface and usually interested in the “look and feel” of the operating system. The most important components of the user interface are the command interpreter, the file system, on-line help, and application integration. The recent trend has been toward increasingly integrated graphical user interfaces that encompass the activities of multiple processes on networks of computers. One can view Operating Systems from two points of views: Resource manager and extended machines. Form Resource manager point of view Operating Systems manage the different parts of the system efficiently and from extended machines point of view Operating Systems provide a virtual machine to users that is more convenient to use. The structurally Operating Systems can be design as a monolithic system, a hierarchy of layers, a virtual machine system, an exokernel, or using the client-server model. The basic concepts of Operating Systems are processes, memory management, I/O management, the file systems, and security.

Broadly, there are three components of computer:

Hardware are parts of computer (we can say physical part) which can be touch by user. Physical part of computer is known as hardware like keyboard, monitor, mouse etc.

Software is a program, which is stored is computer memory and can not be touch by user. Software is a set of programs and programs are set of instructions. Suppose we have to create a software of mathematics, for that purpose we need number of programs of addition, multiplication etc and within one program, there are number of instructions. Examples: windows98, windows2000, MS office, internet explorer etc.

Hardware are parts of computer (we can say physical part) which can be touch by user. Physical part of computer is known as hardware like keyboard, monitor, mouse etc.

Software is a program, which is stored is computer memory and can not be touch by user. Software is a set of programs and programs are set of instructions. Suppose we have to create a software of mathematics, for that purpose we need number of programs of addition, multiplication etc and within one program, there are number of instructions. Examples: windows98, windows2000, MS office, internet explorer etc.

User is also important component of computer because without this we can not operate computer. User is also classified in multiple types like operator, programmer, analyst, administrator etc. Each and every user has specific assignment for achieving a specific task.

What is an Operating System?

The 1960’s definition of an operating system is “the software that controls the hardware”. However, today, due to microcode we need a better definition. We see an operating system as the programs that make the hardware useable. In brief, an operating system is the set of programs that controls a computer. Some examples of operating systems are UNIX, Mach, MS-DOS, MS-Windows, Windows/NT, Chicago, OS/2, MacOS, VMS, MVS, and VM. Controlling the computer involves software at several levels. We will differentiate kernel services, library services, and application-level services, all of which are part of the operating system. Processes run Applications, which are linked together with libraries that perform standard services. The kernel supports the processes by providing a path to the peripheral devices. The kernel responds to service calls from the processes and interrupts from the devices. The core of the operating system is the kernel, a control program that functions in privileged state (an execution context that allows all hardware instructions to be executed), reacting to interrupts from external devices and to service requests and traps from processes. Generally, the kernel is a permanent resident of the computer. It creates and terminates processes and responds to their request for service. Operating Systems are resource managers. The main resource is computer hardware in the form of processors, storage, input/output devices, communication devices, and data. Some of the operating system functions are: implementing the user interface, sharing hardware among users, allowing users to share data among themselves, preventing users from interfering with one another, scheduling resources among users, facilitating input/output, recovering from errors, accounting for resource usage, facilitating parallel operations, organizing data for secure and rapid access, and handling network communications.

There are several types of operating systems, with Windows, Linux and Macintosh suites being the most widely used. Here is an overview on each system:

The earliest electronic digital computers had no operating systems. Machines of the time were so primitive that programs were often entered one bit at time on rows of mechanical switches (plug boards). Programming languages were unknown (not even assembly languages). Operating systems were unheard of.

By the early 1950's, the routine had improved somewhat with the introduction of punch cards. The General Motors Research Laboratories implemented the first operating systems in early 1950's for their IBM 701. The system of the 50's generally ran one job at a time. These were called single-stream batch processing systems because programs and data were submitted in groups or batches.

The systems of the 1960's were also batch processing systems, but they were able to take better advantage of the computer's resources by running several jobs at once. So operating systems designers developed the concept of multiprogramming in which several jobs are in main memory at once; a processor is switched from job to job as needed to keep several jobs advancing while keeping the peripheral devices in use. For example, on the system with no multiprogramming, when the current job paused to wait for other I/O operation to complete, the CPU simply sat idle until the I/O finished. The solution for this problem that evolved was to partition memory into several pieces, with a different job in each partition. While one job was waiting for I/O to complete, another job could be using the CPU. Another major feature in third-generation operating system was the technique called spooling (simultaneous peripheral operations on line). In spooling, a high-speed device like a disk interposed between a running program and a low-speed device involved with the program in input/output. Instead of writing directly to a printer, for example, outputs are written to the disk. Programs can run to completion faster, and other programs can be initiated sooner when the printer becomes available, the outputs may be printed. Note that spooling technique is much like thread being spun to a spool so that it may be later be unwound as needed. Another feature present in this generation was time-sharing technique, a variant of multiprogramming technique, in which each user has an on-line (i.e., directly connected) terminal. Because the user is present and interacting with the computer, the computer system must respond quickly to user requests, otherwise user productivity could suffer. Timesharing systems were developed to multiprogram large number of simultaneous interactive users. Fourth Generation With the development of LSI (Large Scale Integration) circuits, chips, operating system entered in the system entered in the personal computer and the workstation age. Microprocessor technology evolved to the point that it become possible to build desktop computers as powerful as the mainframes of the 1970s. Two operating systems have dominated the personal computer scene: MS-DOS, written by Microsoft, Inc. for the IBM PC and other machines using the Intel 8088 CPU and its successors, and UNIX, which is dominant on the large personal computers using the Motorola 6899 CPU family.

What is operating software?

As we already know that computer is a set of hardware but user is unable to communicate with the hardware because user need a some interface to operate a computer, so operating system (OS) is a master interface between user and computer . OS is a system program which instructs user to access computer in very easy way . best Example of is DOS and windows98 now a days windows 98 is one of the best OS in world because it is so user friendly, easy to learn and supported GUI(Graphical user interface). GUI means commands displayed in form of pictures. So we can say OS is a layer between user and computer.

A. types of OS with Examples As you already know that OS has a key function to manage computers . According to requirements, OS is applicable for single user system where one user only works on the same computer. But sometimes we have to work on number of system. So OS of two types:-

Major parts of the windows 98 screen

The large, backgrund area of the windows screen. You can customize the desktop by adding shortcuts to favorife programs, documents , and printers. You can also change the look of the desktop to fit your mood and personality.

My doucuments is a special folder that provides a convenient place to store files and documents you create on your computer.

My computer lets you see everything on your computer. Double –click the my computer icon on the desktop to browse through your files and folders.

If you work on two computers, you can use the briefcase to keep you files up-to-date.

The taskbar usually appears at the bottom of your screen, contains the famous starts button, which you use to start your programs. Whenever you open a program, document, or window, an icon for that program appears on the taskbar. This lets you see which programs are currently running and easily switch between them.

Functions of the Operating System

The operating system performs other functions with system utilities that monitor performance,
Retrieved from "https://wikieducator.org/index.php?title=Operating_System&oldid=799475"