We find that electricity in one form or another underlies just about everything in the physical world. It holds atoms together to form molecules, rains down upon the earth as lightning, and sparks between our feet when we scuff a rug. Or comb our hair. The control of electricity is evident in technological devices of any kind; computers, phones, satellites; anything. In this day and age it’s becoming more and more important to have an understanding of how electricity works; in order to acquire this, we need to take a step-by-step approach, as different concepts lead onto the next and so on.

This section looks at electricity at rest, or 'electrostatics', as it is called. This involves electric charges, the forces beween them, the aura that surrounds them and their behviour in materials.

Electricity is a universal force like gravity, which varies inversely as the square of the distance; except electricity is billions upon billions time stronger than gravity. If gravity was this strong, and an attractive force, then the whole universe would be pulled together into a tiny ball; if it were a repelling force, then the universe would just be an extremely rapidly expanding gaseous cloud. Electricity is neither an attractive nor repelling force; it is both. Positives repel positives, but attract negatives and vice-versa. (Think of magnets attracting and pulling – this will be introduced later on.)
Clusters of positives and negatives have been pulled together by the hugely strong attraction of electrical force. The result is that the huge forces have balanced themselves out almost perfectly by forming compact groups of evenly mixed numbers of positives and negatives. In fact, between two separate bunches of such mixtures, there is practically no electrical attraction or repulsion at all. For example, the electrical forces between the moon and the earth have been balanced out by now. This explains why the much weaker gravitational force, which only attracts is the dominant force.

The terms positive and negative refer to electrical charge, the fundamental quantity that underlies all electrical phenomena. Protons are positively charged, and electrons negatively charges. The attractive force between protons and electrons is what holds atoms together. Due to the structure of atoms, sometimes electrons can be closer to a neighbouring proton than their own proton – this leads to molecules being formed.

In a neutral atom there are as many electrons as there are protons, so there is no net charge. The positive balances the negative perfectly. If an electron is removed or added, the atom gains a positive or negative charge respectively; charged atoms are called ions. All material objects are made out of atoms, so they are composed using electrons and protons (and neutrons). Objects normally have equal numbers of electrons and protons and have no charge, but there can be a slight imbalance when electrons are ripped loose, are added on. The inner electrons are hard to dislodge, however the outer electrons have weaker forces holding them, and can be dislodged much more easily. How easily varies depending on the material in question; rubber and plastic hold onto their atoms with more strength than your hair does for example, so combing your hair with a rubber comb can result in electrons transferring from your hair to the comb. The comb is now negatively charged, and your hair positively.
When an item is charged, no electrons or protons are destroyed; simply transferred; the charge of electricity is conserved much like energy and momentum. In this case, it is simply called the conservation of charge.

The electrical force, like gravitational force, decreases inversely as the square of thee distances between charges. This relationship was discovered by Charles Coulomb in the eighteenth century and is called Coulomb’s Law. It states that for charged objects that are much smaller than the distance between them, the force between the charges varies directly as the product of the charges and inversely as the square of the separation distance. The force acts along a straight line form one charge to the other. Coulomb’s Law cab be expressed using the formulae:

Or, in scientific notation, k = 9*109 N*m2/C2. The units N*m2/C2 are not central to our interest here, but simply convert the right hand side of the equation to the unit of force, the newton, N. what is important is the large magnitude of k. if, for example, a pair of like charges of 1 coulomb each were 1 metre apart, the force of repulsion between the two charges would be 9 billion newtons; roughly ten times the weight of a battleship! Obviously such amounts of net charge don’t usually exist in our everyday environment.
So Coulomb’s Law for electrical charges is similar to Newton’s law of gravitation for masses, whereas the gravitational force of attraction between particles such as an electron and a proton is extremely small, the electrical force between these particles is relatively huge. The greatest difference between gravity and electricity is that gravity can only be attractive, but electricity can be repulsive or attractive.

An electrical field has both magnitude (strength) and direction. The magnitude of the field at any point is simply the force per unit of charge. If a charge q, experiences a force, F, at some point in space, the electrical field at point E at that point is 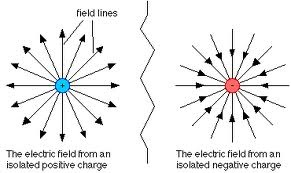 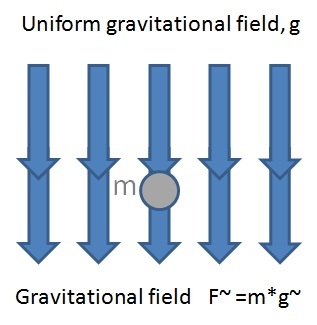 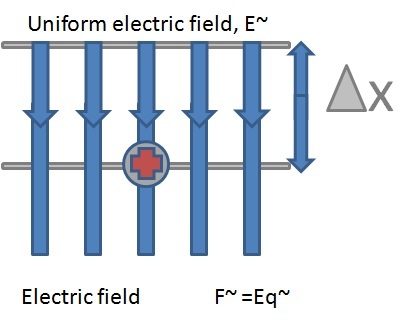 A small test sphere of charge, q, experiences a force, Eq in the direction shown. If the charge, q, is moved a distance ∆x against the field (like lifting mass m against the gravitational field), work is done against the force, Eq, and this work will be stored as potential energy. The work done in moving the charge against the electric field, ∆W, is given by:

The work done is stored in the field and is called electric potential energy.
Electrical energy can be stored in a common device called a capacitor, found in nearly all electronic circuits. Capacitors are used as low-energy on-off switches in computer motherboards, and as a storehouse of larger amounts of energy in photoflash units that release it rapidly during the short duration of the flash.
Example:

The potential energy stored per unit charge is found when the equation ∆W = Eq*∆x is divided through by q:

The potential energy stored per unit charge depends only on the field strength, E, and the distance moved, ∆x. It doesn’t depend upon the charge, and so it is a property of the field itself. The quantity is called the electric potential difference (symbol p.d.) or, voltage (symbol ∆V).

The unit for electric potential difference is the volt (symbol V).
1 volt is 1 joule per coulomb (1V = 1*J *C -1), so when a charge of 1 C moves through a p.d. of 1V, its potential energy changes by 1 J.
In a cell or battery, energy from a chemical reaction is transferred to electrons. EG, a 12V car battery gives 12J of electrical energy to each coulomb of charge it delivers to a circuit.
If electrical contact is made between two differently charged conductors, charge will move from one to the other because there is potential difference between them. (Similar behaviour occurs with differences in pressure and temperature.)

An important difference between electric and gravitational fields is that electrical fields can be shielded by various materials, while gravitational fields cannot (as we know; you can’t just stop gravity from acting on something by placing some metal between two planets!) The amount of shielding is characteristic of the medium within the field. For example, air slightly diminishes the electric field between a pair of charges compared to a vacuum, while oil placed between the charges diminishes the field to about one-eightieth. Metal will completely shield an electric field.
Consider for example, electric charge on a spherical metal shell. Because of mutual repulsion, the charges will spread out uniformly over the outer surface of the shell. It is not difficult to see that the electrical force exerted on a sample test charge placed inside the shell at the exact centre would be zero because opposing forces would balance in every direction. Interestingly enough, complete cancellation will occur anywhere inside the conducting sphere. Understanding why this is true requires more thought and involves the inverse-square law and a bit of geometry. 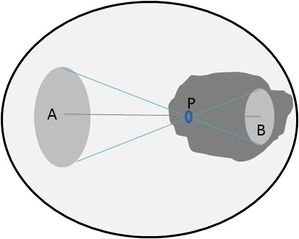 Point P is twice as the distance from the left hand side of the sphere as it is from the right hand side. If electrical force between the test charge (P) and A&B was only decided by distance, then the test charge (P) would be attracted to the left hand side (A) 1/4th as much (due to the inverse square law: twice the distance means only 1/22 of the effect, and three times the distance means 1/33 (1/9) of the effect, and so on). However, the force also depends on the amount of charge. Note how the same angle subtends regions A&B, and that no matter what the angle is, A will have four times the area, and therefore 4 times the charge as region B. Since ¼ times 4 = 1, a test charge at P is attracted equally to each side.
If the conductor isn’t spherical, then the charge distribution won’t be uniform. The charge distribution over conductors of various shapes is shown below

Most of the charge on a conducting cube for instance, is mutually repelled to the corners. The neat thing is this: the exact charge distribution over the surface of a conductor is zero. Look at it this way if there were an electric field inside a conductor, then free electrons inside the conductor would be set in motion. How far would they move? Until equilibrium is established – which is to say, when the positions of all the electrons produce a zero field inside the conductor.
Shielding yourself from electric fields is quite simple; just surround yourself or whatever you want to shield with a conducting surface. Put this surface in an electric field of any field strength; the free charges in the conducting surface will arrange themselves on the surface of the conductor in such a way that all field contributions inside cancel each other out. That’s why certain electronic components are encased in metal boxes and why certain cables have a metal covering – to shield them from all outside electrical activity.