Ultrasound and the Doppler Effect Ultrasonic waves (ultrasound) are sound waves with a frequency greater than 20 000 Hz (the upper limit of human hearing). These waves can be used in medicine to determine the direction of blood flow. The device, called a Doppler flow meter, sends out sound waves. The sound waves can travel through skin and tissue and will be reflected by moving objects in the body (like blood). The reflected waves return to the flow meter where its frequency (received frequency) is compared to the transmitted frequency. Because of the Doppler effect, blood that is moving towards the flow meter will change the sound to a higher frequency and blood that is moving away from the flow meter will cause a lower frequency.

The Study of Sound

Components of a Sound wave

The frequency of a wave is the number of waves per second.

The unit of frequency is Hertz.

Frequency can be calculated using the equation:

The period of a wave is the time required to complete one wave cycle.

The unit of period is seconds.

Period can be calculated using the equation :

Wavelength is the distance a wave travels during one cycle.

Wavelength is measured in meters.

Wavelength can be calculated using the equation:

Amplitude is the height of maximum displacement of a wave from equilibrium position.

Amplitude is measured in meters.

In terms of sound, the amplitude of a wave determines the sound's intensity, in other words, the sound's volume.

Resonance - When one object vibrating at the same natural frequency of a second object forces that second object into vibrational motion resulting in a large vibration.

Forced Vibration - An external force applied to a system from an interconnected object in vibrational motion.

Natural Frequency - The frequency of a sytem vibrating without any external forces after being set in motion.

The amplitude of vibration for a forced vibration depends of the difference between the externally applied frequency and the natural frequency. The amplitude reaches a maximum when the two frequencies equal each other. (When f = fo)


Click the following link to watch a video of resonance and the Tacoma Narrows Bridge.

When a natural frequency causes a forced vibration on a larger object, there will be an increase in amplitude and loudness of the sound.

Intensity - The amount of energy transported by a wave across a unit area per unit of time.

The intensity of a sound wave determines the loudness of the sound.

The unit of intensity is (W/m2)

If you increase the intensity of a sound wave by about 10 times, the sound will sound about twice as loud as the original.

The sound level is defined in terms of it's intensity.

There are three main parts to human ear; the outer ear, the middle ear, and the inner ear.

The fundamental is the lowest resonant frequency where the nodes only occur at the ends of the string. This is the first harmonic. The second harmonic, also known as the first overtone, has twice the frequency of the fundamental. 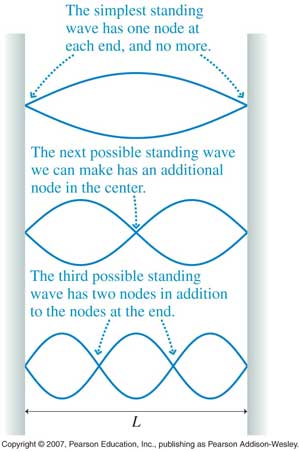 In open and closed tube resonators, the air is what is vibrating. The waves can be measured as displacement of air or in terms of the pressure in the air.

In an open tube resonator, there are diplacement antinodes at both ends of the tube because air is free to move at open ends. There must be at least one single node to have a standing wave.

In a closed tube resonator, there is always a displacement node at the closed end of the tube where air is not free to move. There will always be an antinode at the open end because this is where air can move freely.