It was the Greek philosopher Aristotle’s idea that a moving object must have a force acting on it – otherwise it would remain at rest. This was turned around completely by Galileo, who showed that in the absence of a force, moving objects continue moving. The tendency of objects to resist changes in motion was called inertia. Isaac Newton refined Galileo’s idea and made it his first law, appropriately called the law of inertia:
Law1: Every material object continues in its state of rest, or of uniform motion in a straight line, unless it is compelled to change that state by forces impressed upon it.

Mass measures the amount of matter an object contains. The object’s matter also determines its inertia – the object’s tendency to resist changes in motion – so mass is a measure of the inertia of a material object. The definition of mass corresponds with our intuitive idea of weight – this often is the matter of some confusion, as we tend to think of weight as being how heavy an object is because of how much matter it has. Sometimes when people try to decide which of two objects is heaviest, they shake them back and forth to see which moves less; by now we should know that they are not in fact directly measuring weight, but the object’s inertia; it’s tendency to resist motion.
Mass is more fundamental than weight however, which is defined as ‘the force of gravity acting upon an object’. In Lehman’s terms, when we measure an object’s weight, we’re really measuring the object’s mass multiplied by the force of gravity. This means that when an object’s mass is halved, its weight is also halved – provided there is no change in gravity.
This is an important point to make, as an anvil on the surface of the earth will have high mass and weigh a lot; in outer space however, the object will be weightless, but still have the same high mass – it will be just as hard to shake an anvil side to side in zero gravity, because its matter, inertia and mass haven’t changed – only the force of gravity acting on it.
Using S.I. units, mass is measured in kilograms (kg) and weight in Newtons (N). The size of the force of gravity at the Earth's surface is approximately 9.8 N kg-1 – but in some cases this is rounded up to 10 N kg-1 for simplicity - where exact measurements are not required.

All around us we see objects moving in constant speeds, speeding up, slowing down, and sometimes moving in curved paths. Most of the motion we observe undergoes changes and is the result of one or multiple forces influencing it. The overall net force (sum of all forces influencing the object) produces acceleration. The relationship of acceleration, force and inertia is given in Newton’s second law:
Law2: The acceleration of an object is directly proportional to the net force acting on the object, is in the direction of the net force, and is inversely proportional to the mass of the object.
The results in the formula briefly described earlier on: [math]a \ \alpha\ \frac{F}{m}[/math]
When used with compatible units, this can be turned into the equation: [math]F_{net}=ma[/math]
We can rearrange the equation to give [math]a = \frac{F_{net}}{m}\ [/math] or [math]\ m = \frac{F_{net}}{a}[/math]

A force is, in the simple terms, a push or a pull.
When an object is stationary, or ‘at rest’, the forces are balanced, and the object is in mechanical equilibrium. We call this a static equilibrium, because there is no motion involved. There could be no forces acting on it, or there could be large opposing forcing acting on it, that cancel each other out.

If the object were to accelerate, the forces would be unbalanced. This is because the forces pushing or pulling the object forwards are stronger than those acting against them (pushing or pulling to slow it down) this leads to a net force ≠ 0 which is unbalanced. Similarly, when there is deceleration, the forces slowing an object are stronger than those speeding it up, so the net forces again ≠ 0. This idea that object’s with a net force of 0 are in equilibrium can be very useful; if there is a force acting on an object, but it remains stationary – there must also be an equal and opposite force acting against it.

While at first glance, looking closer however, a force is not a thing in itself, but is due to an interaction between one thing, and another/others. This leads on to Newton’s third law of motion – the law of action and reaction:
Law3: Whenever one object exerts a force on a second object, the second object exerts an equal and opposite force on the first.

Consider a plain empty table on the floor, it is not accelerating - it’s completely stationary. The forces are balanced; but are there forces acting on it? Yes, gravity is pulling the table towards the earth’s centre of mass, and as Newton’s third law states, for every action there must be a reaction. In this case, up-thrust is the reactant force, and it is equal and opposite to the force of gravity (9.8N). The result of this is a net force of zero – the table is at static equilibrium.
When you stand on a pair of scales, the downward pull of gravity and the upward support force of the floor compress a spring that is calibrated to give your weight. In effect, the scale is showing your support force.

Friction is a force which occurs when surfaces slide over one another. The size of the friction depends on the kinds of materials involved, and how much they are passed together; it results from mutual contact of irregularities on the surfaces. The irregularities act as obstructions to motion; even surfaces which appear to be smooth have irregular surfaces at a microscopic scale. The atoms cling together at many points of contact. As sliding commences, the atoms snap apart or are torn from one surface by the other.

Friction always acts in the opposite direction of an object’s motion. An object sliding down an incline experiences friction directed up the incline; an object that slides to the right experiences friction directed to the left. This means that an object travelling at constant velocity must have a force equal to the opposing force of friction (so the forces are balanced – zero net force). When a car brakes, its friction becomes greater than the propelling forces, so the car decelerates.

No friction exerts on a crate resting on the floor. But, if the crate is pushed or pulled, then a friction force is produced. The amount of friction produced can be observed fairly easily; if your push is not enough to displace the crate (ie, it hasn’t moved – still at rest) then the friction produced is equal to the force applied. If you push with 80 N, then the friction would be 80 N. Perhaps 100 N is needed to move the crate – but that doesn’t mean the friction is always 100 N (that would mean the crate would move towards you when you push it!). The 100 N force required to move the crate is the maximum friction that can be created. The surfaces can’t produce any more, so the force become unbalanced and the crate will accelerate in the direction it is pushed in.

An object in the state of free fall is influenced only by the force of gravity (assuming air resistance is negligible). The object has a downward acceleration toward the centre of the earth. On earth the rate of acceleration cause by gravity is 9.8 m s-2.

Question: When I was at Rainbows End I rode the Fearfall. My mass is 60 kg and the height of the Fearfall is 54 m. What is my gravity potential energy while I was falling on the freefall? (gravity is 9.8 N kg-1)

Question: Would I have come down faster if I had weighed less? Or if I weighed more? Why?

Answer: There would be no change to the speed at which I traveled if I weighed more or less.

Question: If you dropped a small parachute off the top of the Fearfall just prior to the carriage being released, why would it reach the bottom after you?

Answer: The descent is slower because the force due to air resistance is large compared to weight force. 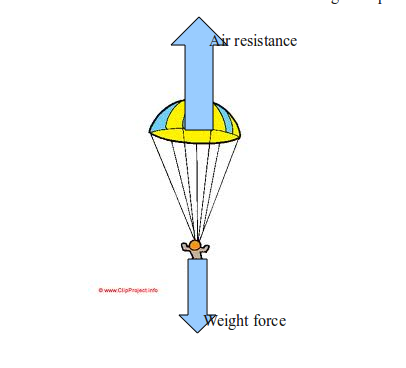 Question: Show the forces acting on a rollercoaster cart as it travels around a banked corner of 45 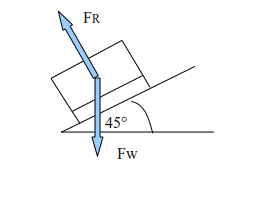