The OER movement to date, has grown organically and through the stimulation of funding agencies, most notably the William and Flora Hewlett Foundation. The movement still comprises a range of individual projects and the most visible form of coordination and cohesion is the annual Hewlett Foundation grantees’ meeting at which specific issues are discussed and a selection of projects are showcased.
Elements the movement appear to be missing is a large-scale understanding and following amongst the multilateral organizations such as the UN Agencies (with the exception of UNESCO) and the national funding agencies. To help to bridge the missing information in the multilateral agencies, a process of orientation workshops is proposed that will be hosted regionally, in a major city in each of these regions:

Orientation of staff in multilateral and other organizations (2-year horizon)

This agenda will require a series of intensive orientation workshops conducted in each region. The convening organization will need to invite all key organizations to send two representatives who are able to participate fully. The representatives will become the organizations' ongoing focal point for OER. A broad workshop outline for this workshop series is included in Appendix 1.

A second phase will be needed to convert the raised awareness and interest into pragmatic funding of existing and new projects. This phase will need to be adopted by a global organization that has both the interest and the core funding to take this forward at the desired scale. The details of this will need to be set out so that all global and regional stakeholders have the opportunity to fully participate in further awareness and capacity building of staff both in the multinational agencies and in institutions and governments.

A typical, top-level agenda should at least include the following:

A matrix structure will need to be formed of at least three groups of organizations or people, including those who focus primarily but not exclusively on: 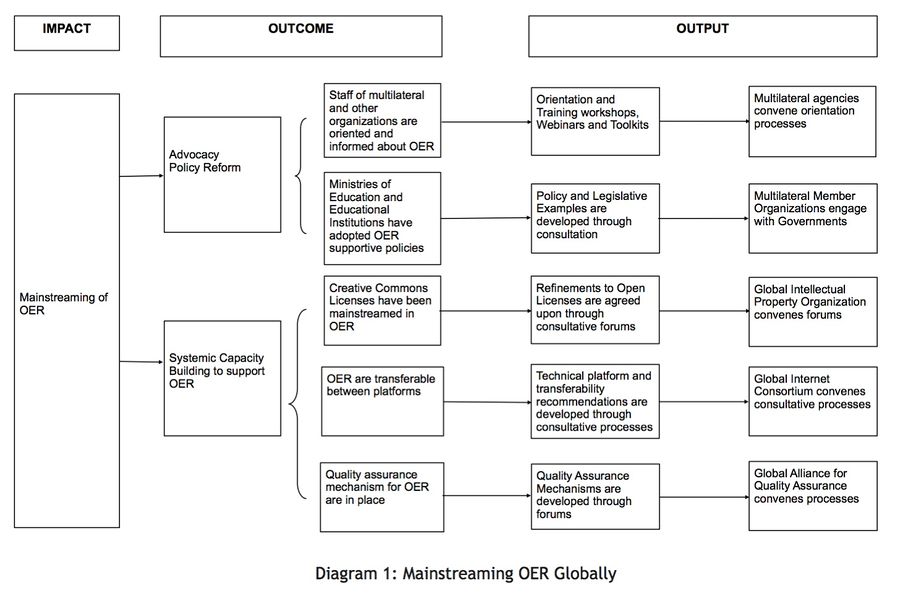