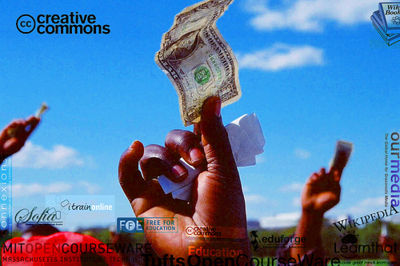 The "BY" clause of the license indicates "Attribution" (BY whom the work was authored). That means whenever this resource is used the author needs to be given credit. Creative Commons does not specify how the attribution must be given, except that it should follow any stipulations given by the author. For example, an author might specify that attribution must read "John Doe - Wikia Inc. http://www.wikia.com." In that case you should follow the author's wishes. If the author does not specify, it is up to you to determine how to attribute the work. As an example, say you have an image that you used in an instructional video. You are not obligated to give attribution at the exact moment in the video you use the image, but you would want to list the author and the URL of the image in the credits at the end. However, you are ethically obligated to display the attribution in a clear and meaningful manner. Putting the attribution in a tiny font size, or providing only the name without any indication of where the resource came from, would be examples of unethical or inappropriate attribution.

"SA" stands for "Share Alike." The "SA" clause specifies that however the resource is used, revised, or remixed, the result must shared in the same way. For example, say you were creating a video that used a song that was licensed with a "Share Alike" clause. That video must then be licensed with the same license as the song. Some believe that the SA clause is helpful in assuring that OER stay freely available to the community (Francom, 2007). Others feel that the SA clause is an impediment to legitimate users of OER that for one reason or another are not able to license the new work as Share-Alike (Wiley, "Sharealike").

"ND" stands for "No Derivatives." Derivatives are variations from the original. Examples of derivatives might include: rewriting text, cropping an image or reducing the length of the video. Putting a "No Derivatives" clause on the license also prevents translation. The No Derivatives clause is often used when the exact presentation of a resource is very important (Creative Commons, "FAQ").

Here are some examples of license possibilities:

This license lets others distribute, remix, tweak, and build upon your work, even commercially, as long as they credit you for the original. This is the most accommodating of licenses offered, in terms of what others can do with your works licensed under Attribution.

This license lets others remix, tweak, and build upon your work even for commercial reasons, as long as they credit you and license their derivatives under the identical terms. This license is often compared to copyleft[1] free software[2] licenses. All new works based on yours will carry the same license, so any derivatives will also allow modification and commercial use.

This license allows for redistribution, commercial and non-commercial, as long as it is passed along unchanged and in whole, with credit to you.

This license lets others remix, tweak, and build upon your work non-commercially, and although their new works must also acknowledge you and be non-commercial, they don’t have to license their derivative works on the same terms.

This license lets others remix, tweak, and build upon your work non-commercially, as long as they credit you and license their derivatives under the identical terms. Others can download and redistribute your work just like the by-nc-nd license, but they can also translate, make remixes, and produce new stories based on your work. All new work based on yours will carry the same license, so any derivatives will also be non-commercial in nature.

As discussed above, this license is the most restrictive of the six main licenses allowing redistribution. This license is often called the “free advertising” license because it allows others to download your works and share them with others as long as they mention you and link back to you, but they can’t change them in any way or use them commercially (Creative Commons, "License").

Beyond the different combinations of Creative Commons clauses, there are two other licenses in development: CC0 and CC+. CC+ is a way of granting extra rights in some situations without having to grant two separate licenses. CC0 is meant to overcome legal difficulties when trying to commit something to the public domain. Some of these difficulties include confirming the dedication of each object (imagine a large repository) and differences in the way some jurisdictions allow works to pass into the public domain. To provide the benefits of a public domain while remaining legally viable, the CC0 license grants the freedom of public domain in a legally viable manner. Both of these licenses are still being tested and improved, so you should not use them for important resources until they have been finalized (Steuer, 2007).