Natural dyes are dyes derived from animal or plant material without any chemical treatment. They are obtained from sources like flowers, leaves, insects, bark roots etc.; however, they are not readily available and involve an extraction process. In prehistoric times, natural colourants were usually obtained from berries, blossoms, barks and roots. They were applied to the fibre without any pretreatment of the dye-material or the textile. In the middle of the nineteenth century, introduction of synthetic dyes marked the decline in the use of natural dyes. However, there are certain ancient art forms such as Kalmkari, which continue to use the natural dyes. A few examples for historical natural dyes are as follows: 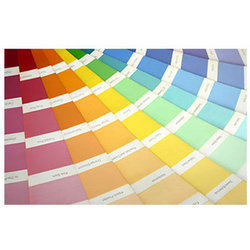 In the present scenario, several advantages conferred by natural dyes make them an attractive option over synthetic dyes. These are as follows:

Despite these advantages, use of natural dyes is practiced in certain clusters only. These include art forms like Kalmkari, commercial practices like Ikat weaving, Block Printing, Boutique work etc. This can be attributed to the limitations imposed by these dyes, which are as follows:

Natural dyestuffs can be divided into two groups;

The majority of natural dyes need mordant, which act as a dye fixing agent forming a link between dyestuff and fibre. Thus, it helps to produce faster shades by forming an insoluble compound of mordant and dyestuff within the fibre itself. The four most commonly used mordants are as follows:

Besides these metallic mordants, a number of tannin containing substances (such as myrabolans and sumach), tannic acid and oil mordants are also in use. Among tannins, Myrabolan is a fruit of several kinds of trees such as Terminalia chebula and Myrabolanus chebula. The bulk of tannin i.e. ellagitannic acid is in the peel of the fruit. Sumach consists of the leaves and twigs of several species of Rhus, such as Rhus coriaria, which yields the best sumach. Oil mordants are used mainly in the dyeing of Turkey Red Colour from a natural dye Madder. The main function of the oil-mordant is to form a complex with alum used as the main mordant. Recently, Sulphonated oils or Turkey Red Oils (TRO) have shown to give Turkey Red Colour of superior fastness and hue. TRO are obtained by treating oil with concentrated sulphuric acid.

Attractive colours can be obtained by mixing different dyestuff in the same dye bath. After completion of one dye, other can be mixed. Different dyestuff can be boiled separately and mixed in various proportions or they can be boiled together but mordanting is essential during or after dyeing. As the quality of the extract varies with the age, season, and other ecological conditions of the source, it is extremely difficult to standardize the shades.

Natural dyeing is not advisable to dye huge quantities or bulk but small lots can be introduced to get very special effects. Sometimes, natural dyed yarns are dull and muddy. With the right treatment and careful selection of the mordants and dyestuffs, the colours can be made bright but the problem of the standardization of the shade remains.