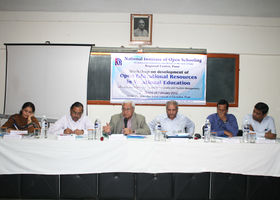 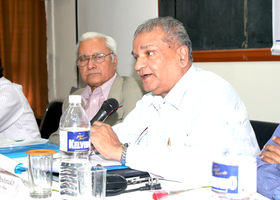 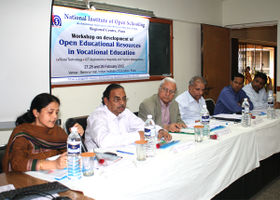 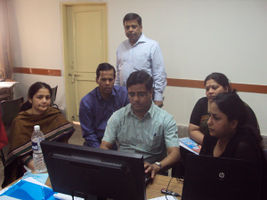 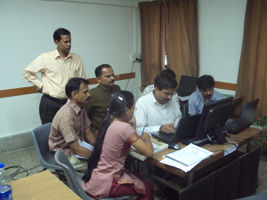 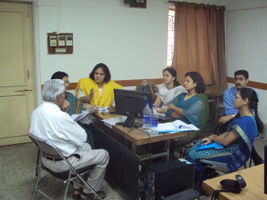 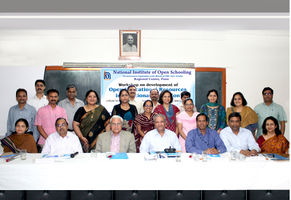 Participants with the Experts

A three days workshop was held at Seminar Hall , Indian Institute of Education, Kothrud, Pune to orient the OER Course teams in the areas of ICT Applications, Rural Technology and Hospitality and Tourism Management during 27,28 and 29th February 2012. Twenty five participants including three course Team Leaders and their team members were present with other Experts of Open Educational Resources. The workshop sessions were co-ordinated by Prof. M.N Deshmukh who has played a major role in the design of the workshop.

On 27th February 2012 the session began with the welcome address by Mr. Sanjay Kumar Sinha , Regional Director. Thereafter objectives of the workshop and the significance of OER development for Vocational Education were elaborated by the Project Co-ordinator Ms. Koushalya Barik , Assistant Director ( Vocational )NIOS, Noida. The programme was inaugurated by Prof. Ram Takwale, Ex. V.C , IGNOU. In his inaugural address he briefly described the history of OER movement . He emphasised that creating OER based educational system should be our ultimate aim.He hoped that this workshop will help in development of Role based and concept based OERs with lot of activities through which the distance learners can enhance their capabilities. Breaking the ice Prof.M.N.Deshmukh, Secretary, i-consent and mentor of the project explained in detail the proposed plan of action (as per annexure-1)to the participants. He also motivated the participants to actively participate in the sessions .

In the afternoon session Prof.M.N.Deshmukh explained the significance of Content Analysis in the development of OER. Then the participants analysed the syllabus and presented their content analysis by writing down the Concepts involved, Objectives and learning activities proposed. Feedback was taken from the participants and the session ended by assigning the task for preparation of content analysis for the entire course.

On 28th February 2012, Dr.Jayashree Shinde , Head of Department of Educational Technology,SNDT University , Mumbai gave an online presentation through two way video conferencing from the University campus in Mumbai. She discussed on the importance of ADDIE Model and the usefulness of this model in the development of OERs. This session was supported by Prof. Veena Deshmukh , Director ,CDE, SNDT University ,Mumbai. After the tea break Prof. Deshmukh gave a detailed explanation on the concept mapping and the modalities of Assessment and Evaluation Procedure which needs to be incorporated in the OERs. She also presented some Sample OERs prepared by some students and teachers for the sake of clarity .

In the post lunch session the participants were asked to prepare Concept Maps on the topics for which the content analysis is complete .The participants were enriched by the inputs received from Prof. Ram Takwale who joined this session to interact with the participants. Towards the end of the day , the teams demonstrated one concept map each from their selected topic. They also continued their work of completing the integrated syllabi.

On 29th February morning Mr. N.D.Deshmukh, Sr. Scientific Officer, HBCSE, Mumbai interacted with the participants giving his experience of OER project of Homi Bhabha Centre for Science Education, Mumbai. He also gave some inputs on systematic preparation of OER . After this sharing of experience Dr.Savithri Singh,Principal Acharya Narendra Dev college took over for her session on Wiki. She emphasised the need of making the OER to be Open in its complete sense( deviating from mere access of the material) and how Wikieducator can be used in achieving this goal. She also demonstrated the use of Wiki educator as a platform for OER. Mr. S.K.Prasad SAP,NIOS , Noida gave his observations on the use of Wikipedia and the e-platform creation through which the participants can be linked for meaningful interaction.

In the post lunch session the participants practised with Wikieducator with inputs from Dr. Singh. Majority of the participants created their user account on wikieducator and also demonstrated some wiki skills. As the participants were asked to prepare at least one specimen OER, the groups were busy in making one OER based on the concept map and the content analysis. The group representative presented an OER each at the end of this session. They also used wikieducator to present this OER.

This was followed by Valedictory function in which feedback on the Action plan was taken from the participants by Prof.M.N.Deshmukh. He also asked the participants to complete the work of preparation of Integrated syllabus by 5th March and Plan for the next activity as per action plan to which all participants agreed. The course team leaders accordingly shall prepare for the next workshop in the month of March involving 25 teachers in each group for final development of the OERs. It has also come out from the workshop that a page on wikieducator can be during the development of OERs. All participants expressed their gratitude to the NIOS for enriching their knowledge and skills in this emerging area of OER development. Mr. Pramod Kumar T.K. Assistant Director , NIOS RC Pune co-ordinated the administrative aspects of the workshop.