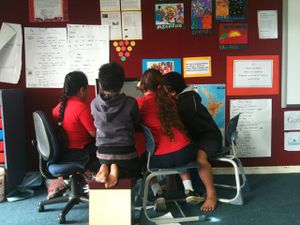 This term, like many New Zealand Primary School classes, my class is learning about the Rugby World Cup. Areas within NZ have been allocated countries to study. Our country is Argentina. Given that I know very little about Argentina, I thought that this would be a fantastic opportunity to 'try out' Sugata Mitra's SOLES in the way he referred to it in this talk when he went to Turin, Italy (you can view this at 14:19).

So following the Mitra recipe, the children self grouped themselves in groups of 4. They were told that they were able to wander around the room, and take other group's ideas back to their own groups. They were asked to find out information about Argentina. 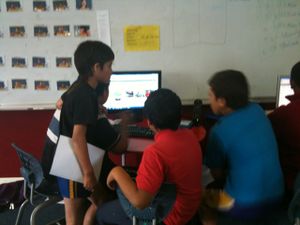 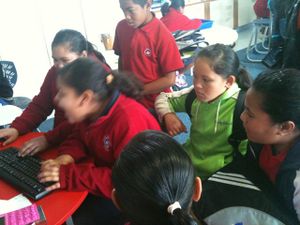 Sugata Mitra argues that children can teach themselves English in SOLES. To test this theory in a NZ context I have challenged my children to teach themselves Spanish in 6 weeks. Their mission is to create a movie for a school in Argentina. The tricky part is that they are only to use the Spanish Language.

MIE does not have to be confined to ICT alone. One of my students was discussing the Spanish project with his SLS teacher and discovered that she spoke Spanish too. She listened to his "Hello my name is ..." and gave him some pointers re sentence structure. It would be more correct to use: "I am called..."

After 6 weeks the students were certainly not fluent in Spanish, however they are aware of basic differences in sentence structures. They have picked up a variety of Vocab words and have cut a film for an Argentina class which is awaiting voice over. Interestingly the children were more concerned with the social aspects of Argentina rather than the language. Their main interest was whether or not kids from Argentina were rich or poor and what kind of sports they played. They very much enjoyed hearing their name used in spanish sentences. For me, this highlights the importance of using our technology to connect our students with 'real-life' perspectives and contacts (e.g video-conferencing an actual classroom rather than relying on adult-made tools). Again, our role as teachers is changing!