You have learnt regarding organisms that can be seen with naked eye from the previous units of your learning material. Now we will discuss about organisms which can’t see with naked eye. It is so surprising, right?

We can see different types of plants are present both of water and terrestrial habitat. Among them some are too small that we can’t see them with the naked eye. These are the members of the kingdoms Eubacteria and Archaebacteria, are the most successful of all creatures on Earth, if success is measured by numbers of individuals.

Microorganisms are the living organisms of microscopic size, which include bacteria, fungi, algae, protozoa, and the infectious agents at the borderline of life that are called virus.In this unit, We will discuss elaborately about bacteria, virus and fungi .

Bacteria are generally chlorophyllless, prokaryotic (without nucleus), single celled microscopic (can’t see with the naked eye) organisms. The meaning if the word bacteria is stalk. In essence they consist of cell protoplasm contained within a retaining structure or cell envelope. They are among the most common and ubiquitous organisms found on earth. For example, even a gram of soil can contain up to 1010 bacteria. They can also be found in diverse and extreme environments. 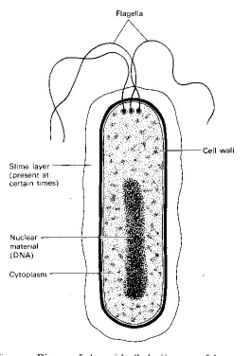 Different kinds of bacteria have different structures. Here we will discuss structure of a typical bacterial cell.

Bacteria are multiplies through binary fission. It’s an asexual reproduction and sometimes called vegetative reproduction due to absence of any spore.

Binary fission is the typical and main way to multiply bacteria. It is very simple and very fast reproductive method.

i) Cytoplasmic membrane of the bacterial cell developed into the inner side at middle of the cell and simultaneously nucleoid materials are also start to divide. Cell is divided into two cells after attachment of cytoplasmic membrane. Both of two daughter cells receive nuclear materials.

iii) Newly developed cells are separated from each other and two bacteria are developed from a single cell.

Binary fission is occurred in a favourable condition and it takes about 20 to 30 minutes.

Economically bacteria are very much important. Both beneficial and harmful effects are occurred in bacteria.

iii) Leather industry: Bacteria help to remove the hairs from the leather.

iv) Remove of texture from jute: bacteria keep an important rope to separate texture form jute and there is no alternative to do so.

vii) Digestion of cellulose: Bacteria help to digest cellulolytic materials those were eaten by cattle, cows and goats. 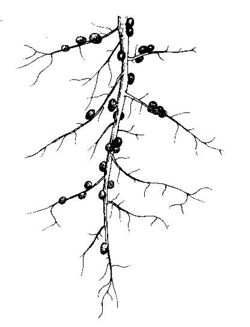 a. Man: Bacteria can produce different diseases in human bodies. Such as-

b. Animals: Bacteria can cause the different diseases in household animals.

Viruses are infectious agents so small that they can only be seen at magnifications provided by the electron microscope. They are 10 to 100 times smaller than most bacteria, with an approximate size range of 20 to 300 nm.

Viruses are incapable of independent growth in artificial media. They can grow only in animal or plant cells or in microorganisms. They reproduce in these cells by replication ( a process in which many copies or replicas are made of each viral components and then assembled to produce progeny virus). Thus viruses are referred to as obligate intracellular parasites.

A virion is a complete, fully developed viral particle composed of nucleic acid and surrounded by a protein coat. This coat protects it from the environment and serves as a vehicle of transmission from one host cell to another. Viruses are classified by differences in the structures of these coats.

Capsid A protein coat called the capsid surrounded the nucleic acid of a virus. The structure of the capsid is ultimately determined by the viral nucleic acid and accounts for most of the mass of a virus, especially of small one.

Nucleic acid Virus contains a single kind of nucleic acid, either DNA or RNA, which is the genetic material. The percentage of nucleic acid in relation to protein is about 1% for the influenza virus and about 50% for certain bacteriophages.

In contrast to prokaryotic and eukaryotic cells, in which DNA is always the primary genetic material (and RNA plays an auxiliary role), a virus can have either DNA or RNA but never both. Generally plant virus contains RNA and animal virus contains DNA.

Federick W. Twort in England discovered bacteriophages, viruses that infect bacteria, independently in 1915 and by Felix d’Herelle at the Paseur Institute in Paris in 1917.

We will discuss here about T2-bacteriophage. 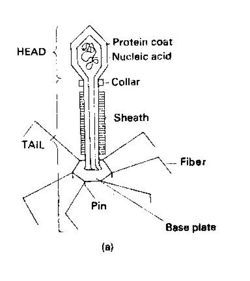 Viruses may be classified into several morphological types on the vasis of their capsid architecture. The structure of these capsids has been revealed by electron microscopy.

Helical viruses resemble long rods that may be rigid or flexible. The viral nucleic acid is found within a hollow, cylindrical capsid that has a helical structure.

Although the means by which a virus enters and exits a host cell may vary, the basic mechanism of viral multiplication is similar for all viruses. The best understood viral life cycles are those of the bacteriophages.

Viruses are responsible to produce different kind of diseases in plants and animals. But viruses also play a positive role for human beings.

Virus produces different diseases to plants, animals and humans, as such-

i) human diseases like pox, hum, polio, influenza are produced by viruses.

ii) viruses are responsible for AIDS, a deathful disease of human beings.

Virus can play positive role to human being, as such-

i) different vaccines, like small pox, jaundice etc vaccines are produced from viruses.

ii) Viruses are used to scientific study in Molecular biology and genetic engineering.

Fungi are eukariotic organisms. They can’t produce their own food because they have no chlorophyll. Thus, they either depend on a living host organism (in which case they are said to be parasites) or on decaying matter for their nutrition (thus called saprophytes). Like bacteria, their cell walls are made up of cellulose and chitin. There are many kinds of fungi. We may have seen them as green, white, gray, black, and orange molds on various things left in warm and moist conditions. The toadstools in the woods are another kind.

Mushroom, bread mold, and yeasts also belong to the group of organisms called fungi. Fungi are widespread in the environment. Most fungi multiply asexually by forming many spores. These spores are easily carried to places by wind, water, animals, or humans. Some sensitive people develop allergy when they inhale these spores.

Fungi also multiply by budding. Other groups of fungi, however, reproduce sexually by fusing male and female hyphae in a process known as conjugation.

Hyphae are branching filaments consisting of several cells. They represent the vegetative or asexual stage in the life of most fungi. Along the hyphae, root like structures that attach the fungi to a surface extend downward. Hyphae absorb nutrients from that surface. At certain points, structures that form spores extend upward. Spores are located in the sporangium. Black spots seen on stable bread are actually spores. These fruiting structures are used to classify fungi.

Agaricus is a saprophytic fungus. Species of these types of fungi are called gill. Agaricus can grow on muddy soil, upper side of wood, compost manure, rotten straw, Cow dung etc. Agaricus can grow well in rainy season. Sometimes it can grow as a circle within the grass field. This type of cycle is called pericycle.

The somatic structure of agaricus divides in two parts, one is vegetative part or mycellium and another part is reproductive part or fruiting body.

Vegetative mycellium of agaricus develops from the primary mycellium of germinating basidiospore. Mycellium have many branch and sub-branches, and grow within the moist soil. Haphae of mycellium are septate. Hyphae are white colour and take nutrients from habit.

Cells of hypha consist of many nucleous, grnular cytoplasm, small vacule and oily drops. Mycellium of hypha sometimes aggregates together and formed a rope like structure called rhisomorph.

Agaricus consists of a stalk with an umbrella-shaped cap. On the cap’s undersurface are gills. Fruiting bodies called basidia that produce spores are found on the side of gills. Mature spores fall to the ground. They may be carried by wind or water to other area. Mature fruiting body looks like umbrella and that’s why it is called toad’s umbrella.

Mushrooms are another kind of fungi. Some mushroom species are edible and others are poisonous. Nowadays, edible mushrooms such as Volvariella sp. are commonly grown. Ipil-ipil leaves, rice stalks, and banana leaves are used as growing surfaces. To these substrates, honey, coconut water, and urea may be added.

Life saving antibiotic can produce from different fungi. Penicillin produces from Penicillium notatum. Sir Alexander Fleeming was discovered Penicillin in 1928. Some fungi are also decomposers like bacteria. They can also cause spoilage of food. Fungi decompose organic materials.

Some fungi are parasitic on humans, animals, and plants. In humans, they can cause ringworm, athlete’s foot, and other skin diseases. Certain fungi may be caused for Wilting of crops like tomato, corn, banana, and papaya. Fungi may also attack seeds. Consequently, these seeds don’t germinate.

parasitic. live on a host plant or animal from which take nutritious material

B. Protein and nucleic acid