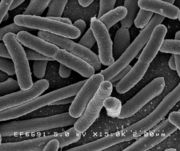 This is a science lesson that uses the the image magnifier iDevice to explore the structure of bacteria cells.

You may have heard of E. Coli (image to the left) which is short for Escherichia coli -- a bacteria which has strains that cause severe cramps and diarrhea. It can be found in contaminated drinking water, and food. In the fall of 2006, there was a huge recall of Spinach which affected at least 21 US states and Canada due to E. coli contamination.

There are also strains of bacteria that are beneficial. For example, biological water purification is performed to decompose organic compounds. The microrganisms, responsible for the decomposition are mainly bacteria. Bacteria are everywhere! Interested in learning more about the cell stuctures of harmful and beneficial bacteria? Follow me to where it all starts!