Work at the Ministry of Education

The Ministry has a Headquarters located at Bikenibeu village. The Headquarters has a Minister, Permanent Secretary, Director of Education, Senior Education and Administration Officers, Education, Sports, and Youth Officers, District Education Officers, Education Information and Management staff, Scholarship staff, Registry, Accounts and support staff. There are other divisions within the Ministry, including: i) The Kiribati Teachers College; ii) The Curriculum and Assessment Division; iii) The Primary and Junior Secondary Division; and iv) The Senior Secondary Division; and v) The Non-Formal and Inclusive Education Division.Return to Life_in_Kiribati/Buildings

The education system have been implanted during colonial times and nearly 150 years after the start of formal education. Kiribati has gone through much rethinking, reviewing, re-evaluating, re-conceptualising, reformulating and redesigning of its educational system, approach and paradigm to re-discover what ought to be the major design of the new education system in the new Millennium. Return to Life_in_Kiribati/Buildings

Currently, the Curriculum and Resources Centre is reviewing the curriculum and assessment, and is reformulating a new National Curriculum and Assessment Framework. This is taking place at the Otintaai Hotel between the 5th and the 7th September 2007. Participants include officers from the Ministry of Education Youth and Sports, the Teachers College, KGV/EBS and CDRC. Below are some snapshots from the workshop. Return to Life_in_Kiribati/Buildings 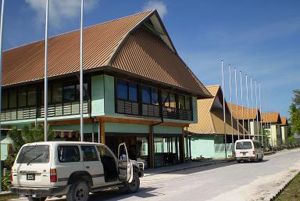 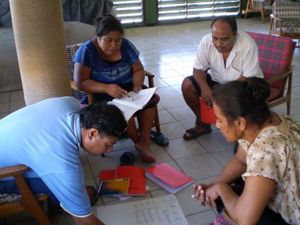 Here captured are Tebwatoki, Tenangimawa, and Bonoue. They all are from the Primary Division of the Ministry of Education, Youth and Sports. Return to Life_in_Kiribati/Buildings 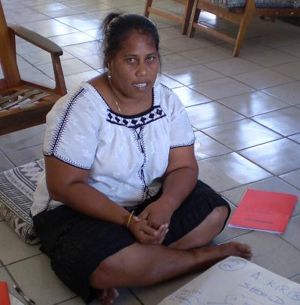 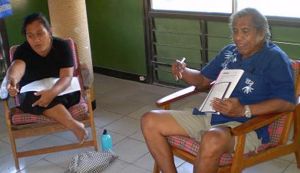 Tamaetera is a lecturer at KTC in mathematics. Era is a DEO at the primary division of the ministry of Education Youth and Sports. Seen here are these in their group brainstorming on what a NCAF should contain. Return to Life_in_Kiribati/Buildings 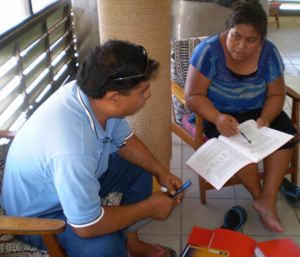 The two are again brainstorming each other on what should consitute a NCAF. Bonoue (top) is a District Education Officer for the central Division in Kiribati. She is stationed at the Ministry. Tamareiti is in charge of the school broadcasting service, stationed at CRDC. Return to Life_in_Kiribati/Buildings

Participants at the Workshop 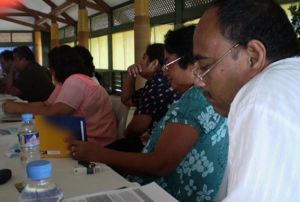 Seen here are rows of participants poised during a presentation at the Otintaai Hotel. Clearly seen are Batoromaio, Mariateretia, Terengaiti and others.Batoromaio Kiritian is the senior education officer for secondary education. He is stationed at MEYS HQs. Terengaiti is the senior mistress at KGV and EBS. Return to Life_in_Kiribati/Buildings 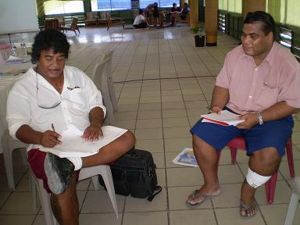 Pictured is Tebwatoki Twetia and Karawa Areieta. These are members of the group again debating among others what language policy should Kiribati adopt. In deciding on this they looked at NCAF for Samoa, Cook Islands, Niue, and Tokelau, and Tonga. In Kiribati the language policy is that Te-Kiribati is the official instruction language for classes 1 to 43. From 4 to 6 English is the medium. Tebwatoki Tawetia is the senior education offcier for Basic education. He is stationed at the Ministry headquarters. Karawa Areieta is the curriculum developmental offcier and is stationed at CDRC. Return to Life_in_Kiribati/Buildings 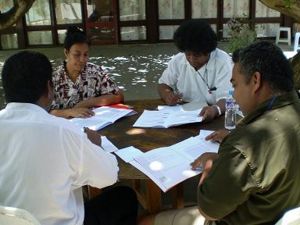 Here seen are four participants. They are Kinta Eram - a planning offcier at the ministry of education, Tiare Teibira - the director at the curriculum development and resources centre, Teamita - a lecturer at KTC, and another KTC lecturer in music at the KTC. As seen they are busy discussing and identifying elements of a NCAF.Return to Life_in_Kiribati/Buildings 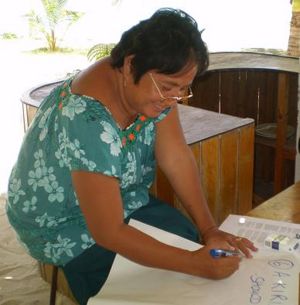 Mariateretia is seen here enjoying her interaction with the paper chart as she puts into words the outcome of their discussion and deliberations on what should constitute elements of the NCAF. She is the Principal of the government owned senior secondary school - known as King George V and Elaine Bernacchi school. This is a senior school that only has students from Years 10 - 12. The role of KGV is around 600. Return to Life_in_Kiribati/Buildings 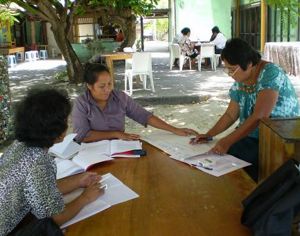 These three ladies are again involved in discussing what should go into the NCAF. Maraiteretia is the Principal of KGV/EBS. She is a linguist by training and wears spectacles. The thinner of the two is Taatu Kabuta. She is the examinations officer. The third is Mauea Wilson. She is the Youth Officer and is stationed at the Minsitry of Education, Youth and Sports Headquarters. Return to Life_in_Kiribati/Buildings 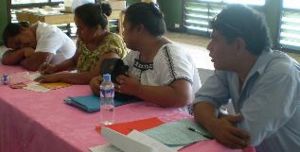 These three participants were sitting at the back of the hotel listening and perhaps sleeping through the workshop as it progressed in the last day-Friday 9th September 2007. Seen are Baboniti, Tenangimawa, Bibiana, and their single male - Tamareiti Kairo.

The Group of Workshoppers 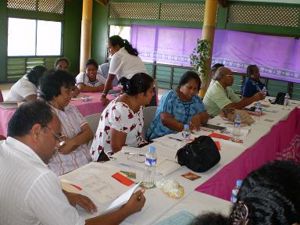 The group is in discussion over some points. Seen are Batoromaio, Kaaro, Dr.Api and others during the last day of the workshop.The group are from the Minstry of Education, Youth and Sports, from the Kiribati Teachers College, and from the Curriculum Development and Resource Centre. 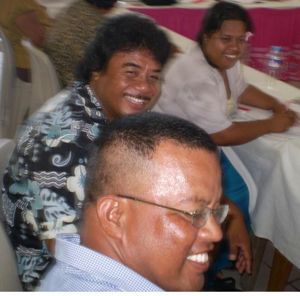 Pictured are Teekana, Karawa, and Tekaribwa. They are in attendance at the NCAF workshop.They are the group in front close to the presentationa area. Each of them is from a different worksplace. The former is from King Goerge V and Elaine Bernacchi School, the middle from the Curriculum Deveopment and Resources Centre, while Tekaribwa is from the Kiribati Teachers College. 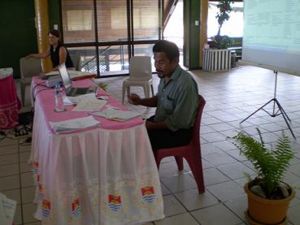 Here are the organisers of the workshop. Pictured is Tiare who chaired the meeting and discussion during the last day of the workshop. Pictured at the back is Libby who is a technical assistance from AusAID, stationed at CDRC. Between them they have spent the three days mapping out the essentials of a Kiribati National Curriculum and Assessment Framework set to be attempted in 2008 with the hope that it will set the curriculum pathway for the next decade and beyond. Before this attempt the NCAF for Kiribati has been based around specific disciplines at each examinations level.
Retrieved from "https://wikieducator.org/index.php?title=Life_in_Kiribati/Work/Professions&oldid=68071"