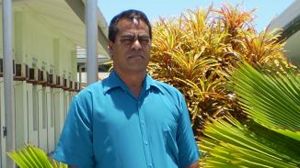 This page is set up by Tebania Tebakabo. The views expressed are entirely that of the author and do not reflect in any way views of the Ministry of Education Youth and Sports.The collection and analysis are entirely the author's own constructions and is not guided by any official or religious directions. They are personal constructions and must be viewed as such. All photos used are the author's own. Enjoy the page. Ko raba.

Kiribati is a stratefied society. This means that the social system gives recognition to experience, and maturation. The society is run by the 'elders' who are the most senior in the housedolds, village and island society. Also men head social institutions like the 'Maneaba' system of government. So in any social setting this hierachy is maintained and reflected. For example, in a ceremony, always the 'elders' have their turns first - in food, speech, respect, decisions, what nots. In the photo, the ceremony is lined up with the old, the medium olds, and the young - both for men and women. Return to Life in Kiribati 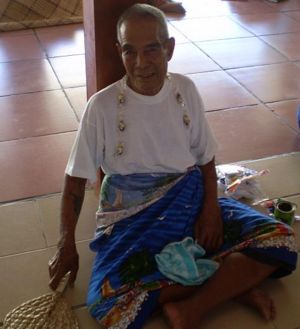 This is Tom Taninga. He is one of the oldest man in the KPC Maneaba. As such he is a member of the ruling elders. They occupy the top echelon of the Kiribati society and are considered the 'wise' men of the society. Tom Taninga is indeed a traditional dancer who is gifted with dance organisation and leadership. He is now a retired old man serving as an elder in the KPC Bikenibeu ICC. He is from Beru Island, in the southern part of the Gilbert islands. Tom is respected for being a traditional expert on the art of dancing and community leadership. In the past Tom palyed the role of dancing team leader. Under his tutelage, people are 'moved' by the power of his influency on the way people sing, clap, and participate in dancing. Under his guidance people are like empowered with the 'spirit' of dancing to accomplish among other things, admiration and accomplishment few people usually encouter in their normal dancing experiences. Such are the wits and 'powers' of Tom Taninga. Return to Life in Kiribati 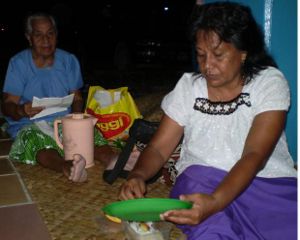 In traditional ceremonies, the women sits at the back and play supporting roles to their men who sits in front. Captured here is an old woman and her daughter serving the front line man with food, drinks, and provide other support services like entertainment and amusement. Return to Life in Kiribati

The Old Yet Not So Old Men in Attendance

Pictured here is the second line of 'old' men. These elders are next in the line of eldership. As such they play supporting roles to the old men in decision making, social organisation, and ceremonial functions. Seen here is Tiota Mwakaea from the island of Arorae. He is standing as part of a team of dancers in the 'pump' dancexercise - that Bikenibeu ICC is well known for. Here everyone alike participate in dance and exercise especially after foregoing a heavy meal, as a means to bring about blood circulation and energy burnout. Return to Life in Kiribati 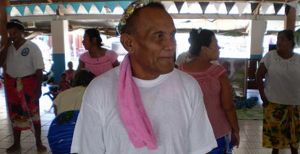 Here Tekeke from the island of Tamana is seen taking part in the 'pump' dancercise. Tekeke is a third generation elder. He is also a devoted christian and is a deacon. He sings very well in the choir and has a high tenor capability. Tekeke is a committed and dedicated member of the KPC community in Bikenibeu. Return to Life in Kiribati

A Ceremony of Dancing

Every ceremony derives its joy and fun from the dancing and group participation where everyone joins in the merrimaking bussiness of making the occassion funful and enjoyable. Here women are seen taking part in a 'bicycle' dancercise after the heavy meal. Dancing is a communal bussiness. Everyone takes part in it and contributes to a group performance that generates laughter, activity, entertainment, and collective responsibilty. Return to Life in Kiribati

A Ceremony with the Dancers 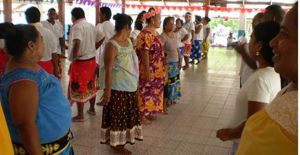 Pictured next is the chief guest - Temwakei at the farewell dancercise. Temwakei is seen with a group of women participating in a 'pump' dancercise and submitting her individuality to be part of the ceremony, the activity, and the group dynamics. It is worth noting here that nowadays, dances of this sort are common. In the past these would be rare and 'unacceptable' especially in religious gatherings - which were supposed to be 'holy' and free of dances, merry making, and idiosyncracies. Time has brought changes to Kiribati including church gatherings and social participations. Return to Life in Kiribati 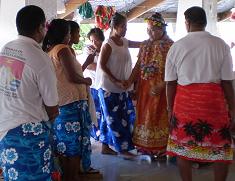 Everything comes to an end. Here the KPC Bikenibeu community is saying goodbye to Nei Temwakei at the end of her assignment with the church council in Bikenibeu. Pictured here is Nei Temwakei going around shaking hands of the congregation. It was a sad occassion and people were emotional and saddened. Farewell is a entrenched phenomenon in the Kiribati culture. Going abroad, even from one island to the next, calls for a family farewell function. People gather to ceremoniously say their goodbyes and offer their best wishes to the travelers. This tradition carries on into other aspects of life in Kiribati and espacially into church gatherings such as depicted. Return to Life in Kiribati
Retrieved from "https://wikieducator.org/index.php?title=Life_in_Kiribati/Local_Settings&oldid=91236"