Upon completion of this unit the learner will be able to:

Sex refers to the biological characteristics which define humans as females or males.These sets of biological characteristics are not mutually exclusive as there are individuals who possess both but they tend to differentiate humans as males and females.Only women can give birth and breastfeed.Only men can supply sperms. Gender on the other hand is socially constructed andlearnd. You are not born with it,therefore, it is changeable.Women can do traditionally male jobs as well as men. Men can take as good care of children as women.

Similarities and Differences in Gender and Sex Roles 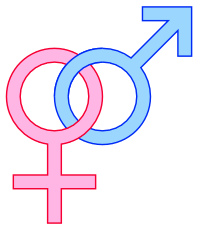 Society assumes that men and women are born to perform different roles and with different aptitude and abilities.As such it has identified the woman's role of that of nuturing, homemaking and caring for the family,in other words, it sees the woman as involved in what may be called "soft occupations". On the other hand the man is assigned the role of breadwinner which is usually associated with what is called the "hard occupations" requiring strength, the one to exercise power over the woman.Some other masculine gender roles include tailoring and carpentry. The similarities exist when these roles overlap in some way. These roles, however, can be changed by education and media images, among other means as gender issues are rooted in learned behaviours.

The difference between men and women is obvious in both physiological and psychological aspects. Personality differences between mn and women are not as obvious as biological differences because psychological differences in men and women are probably caused by biological differences. The historic interpretation of these differences can often lead to prejudice and discrimination against women. Read more by clicking on this website http://academics.tjhsst.edu/psych/oldPsych/ch14-2/ Before going on any further, let me ask you a question, how would you describe yourself to yourself? I believe if you are a female, you might answer by discussing the different roles that a female have, being a daughter, a wife, mother, a lover, a friend etc. because females define who they are by describing themselves by the relationships they have.On the other hand if the same question was posed to males, the response might be different they might define or describe themselves by their accomplishments and from their sucess stories.

Feedback:
How many more gender roles were you able to identify? Keep adding to your list whenever you find a new role of each.

Cultural Stereotypes and Impact on Sex and Gender Roles

Cultural stereotypes vary with culture and can be either positive or negative.They are often used, however,in a negative sence as they tend to ignore the individual beliefs, needs,experiences, abilities and characteristics of each person. They create assumptions about a person based on physical, social and economic factors.There can be sex role stereotypes and gender role stereotypes.

Sex role stereotypes have to do with our expectations about the behaviour of males and females: men do heavy work because we see them as stronger than women, for example,while women care for babies.

Gender stereotypes reflect our impressions and beliefs about females and males: females are expressive, that is, more emotional.Males are more instrumental.

Stereotyping can affect couple and family interaction. Often the division of household labour is based on gender. Women will be assigned housework and men work outside the home to bring in an income for the family. Specifically, men and women maybe judge by how well they conform to traditional stereotypes. In Pleck(1976) theory of masculine gender role strain, he said that boys and men are pressured to fulfill a cultural standard of masculinity and when they do not they suffer from low self esteem or worth. Even men who successfully fulfill the standard of masculinity suffer psychologically or emotionally from rigid constraints on acceptable parenting role for men.

Widespread change in gender roles is assumed to be occuring at the present time. Emerging evidence shows change in labourforce participation, sexuality and attitudes. Change maybe as a result of several factors and sometimes occur in relation to societal demands and needs. Societal needs may exist in the following instances,among others, where:

Change in labourforce participation includes the elements of convention or tradition which seem to play a dominant role in deciding which occupations fit in with which gender roles. In the United States, physicians have traditionally been men, and the few people who defied that expectation received a special job description: "woman doctor". Similarly, there are special terms like "male nurse", "woman lawyer", "lady barber", "male secretary," etc. But in China and the former Soviet Union countries, medical doctors are predominantly women, and in the United Kingdom, Germany and Taiwan it is very common for all of the barbers in a barber shop to be women. Also, throughout history, some jobs that have been typically male or female have switched genders. For example, clerical jobs. Clerical jobs used to be considered a man's job, but when several women began filling men's job positions due to World War II, clerical jobs quickly became dominated by women. It became more feminized, and women workers became known as "typewriters" or "secretaries". There are many other jobs that have switched gender roles, and many jobs are continually evolving as far as being dominated by women or men. No society is gender neutral or sexless, however, societies vary in the content of different gender roles. Gender identity can be seen in styles of grooming, dress and social tasks. Today, styles of personal grooming and dress are becoming less differentiated particularly among the young people.

The change in gender role can have positive and negative impact on relationship both within the family and at the work place. In families where both mother and father are working, there is the threat of child neglect as enough time may not be spent with the children.

Sex, Gender and HIV and AIDS

This section will specifically focus on sex (the biological differences between man and women) in relation to the spread of HIV as well as the gender inequality, gender power relations and their impact on HIV and AIDS. The characteritics of the biological make-up of male and female, and their vulnerability to the HIV spread is different and therefore makes it necessary to dicuss.

Let's first look at the sexual differences in relation to their impact on HIV and AIDS.

Sex Differences and the Spread of HIV

This section will specifically focus on sex (the biological differences between man and women) in relation to the spread of HIV as well as the gender power relations and their impact, on HIV and AIDS. The characteritics of the biological make-up of male and female, and their vulnerability to the HIV spread is different and therefore makes it necessary to dicuss. The Gender (role) power relations of male and female also impact their relationships which in turn affect the spread of HIV and AIDS.

Gender Inequality, Power Relations and the Spread of HIV & AIDS

The Gender inequality and the power relations of male and female also impact their relationships which in turn affect the spread of HIV and AIDS.

Feedback:
You may have thought of poverty, sexual abuse, the culture of silence, domestic violence, attitude and stigma, etc. Can you think of any other factors that can add to this list?

Feedback:
Good Work! You are doing well. Find some similarities and differences from the answers.HERE