Each learner comes from a different background, with their own values as influenced by the physical or cultural context. It is important that you are aware of these differences as they may hinder the comunication process.

Barriers to Communication includes a range of physical, mental or emotional hindrances which can prevent messages from being passed on successfully between sender and receiver during the process of communication. Examples of these barriers include language,physical, emotinal, mental, cultural, situational, contextual and experiential. Recognition of these barriers will facilitate selections of appropriate techniques or strategies that are needed for overcoming them and or for making improvement in the process.

Physical barriers concerns with ranges of hindrance or obstruction that might occur anywhere along the channel/line of communication beginning from the sender to the reciever to block off of the actual intention of the message. These physical barriers may include physical object, noise from a passing trafic, disruptions such as two people talking as the same time, distance from which the call is made from, mechanical or technical faults or amfuctions, feeling unwell like being too sick or stressout or secondary or third person relaying the message.

The mental, emotional, psychological state of the learner may also affect the way the message is conveyed or interpreted. These situations may result from:

As a learner from a different origin, your interaction with your group may impact how you communicate due to the difference in cultural and social class or sub-groups. Awareness of the customs, values and traditional beliefs of the group is very important as these may affect the success of your intended communication with them. There can be personal biases, social prejudices based on political, ethnic and religious beliefs and generalized perceptions and stereotyping others.

As a learner it is of paramount importance that you make it your responsibility to accommodate language differences and find a common ground within which the group can learn. Some words can have more than one meaning given the specific contextin which it is being used. Some learners language for learning may be his/her own language or even be a second language of learning e.g. English, French. Use of incorrect terminologies or mis-spelt words may lead to incorrect conveying of information.

An individuals prior experiences in encountering some words or expressions could affect how they respond to similar messages in the future.

The prevailing situation at the time of the sending and receiving of the message may influence the process.

Based on the types of barriers discussed in the session paragraphs above, share any of your personal experiences where you were unable to send intended message.state what the barriers is and show in the image at which point in the communication process the problem may have occur. then identify an appropriate strategy of how you would go about preventing the problem from occuring again. 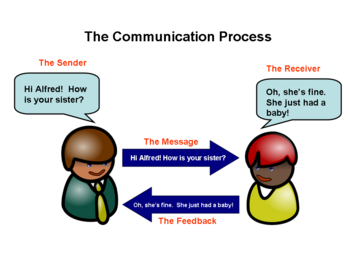 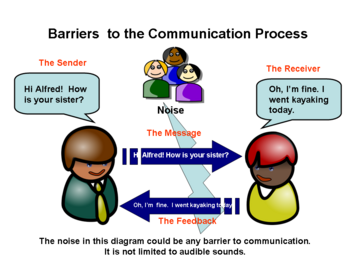