Energy is an essential component of all development programmes. Without energy, modern life would cease to exist. We need energy to maintain physical comfort in much of the world, to win and manufacture useful materials and artefacts, for transport, for communications, for agriculture and for industry in general.

Energy can be made available by harnessing natural energy flows such as moving water, solar radiation and wind, and mainly by using fuels such as wood, coal, oil, natural gas and uranium. However, the harnessing and utilization of energy is associated with worrying problems, namely, depletion and environmental damage.In this lesson, we examine these environmental problems.

The Problem of Depletion

Energy resources all over the world are getting depleted. Over 90 percent of all the energy used in the entire world comes from fossil fuels (coal, oil and gas) that are exhaustible. Millions of years ago, organic matter (the remains of plants and animals) decayed and built up into thick layers. Over time, mud and soil that covered the organic matter changed into rock and trapped the organic matter beneath. Pressure and heat changed some of the organic matter into coal, some into oil (petroleum), and some into natural gas.

Currently, the world uses in one year an amount of fossil fuels that took nature roughly one million years to produce. At our present rate of consumption, and assuming no population increase, all the known oil reserves could be exhausted by the middle of this century and natural gas by 2070. Coal supplies will last much longer – for roughly 200 years at current consumption rates. We must however note that new deposits of fossil fuels continue to be discovered from time to time.

Apart from the problem of energy resources getting depleted, energy harnessing and utilization cause an immense amount of environmental damage. There are environmental problems associated with the use of almost all forms of energy. In this section we examine some problems associated with the use of fossil fuels, fuel wood, uranium, hydro power plants and wind energy.

Problems Associated with the Use of Fossil Fuels

The problems that relate to the use of fossil fuels include the following:

Global warming refers to the gradual increase in the average temperature of the Earth’s surface and its atmosphere which has been attributed to the accumulation of greenhouse gases. The main greenhouse gases are carbon dioxide (CO2), methane (CH4), water vapour, nitrogen oxides (NOX) and chlorofluorocarbons (CFCs). All the greenhouse gases except CFCs are naturally produced and their concentrations in the atmosphere are increasing due to human activities.

CO2 is the main greenhouse gas, accounting for more than 50 percent of the global temperature rise. This has occurred because of the burning of fossil fuels and wood products. Notwithstanding the increase in the levels of CO2, there is continuing loss of the world’s forests that serve as CO2 sinks (green plants remove CO2 from the atmosphere). Through the process called photosynthesis, green plants constantly remove CO2 from the atmosphere and combine it with water vapour in the presence of sunlight, to produce carbohydrates and oxygen: 6 CO2 + 6H2O + Sunlight → C6H12O6 + 6 O2↑

Methane may be produced naturally when wet organic matter decomposes under bacteria action in the absence of oxygen. Such decompositions could take place in landfills, swampy/paddy fields, digestive tracks of ruminants and termites and septic tanks. Man induced methane emissions may come from leaks in natural gas distribution systems, leaks of refinery gases in petroleum reefing and coal mining. 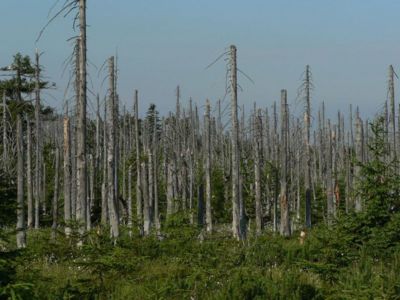 Damage to forest by acid rains: Image provided by courtesy of Wikicommons- www.commons.wikimedia.org
Acid rains are caused by the release of sulphur dioxide (SO2) and oxides of nitrogen (NOx ) when fossil fuels burn. The oxides combine with water vapour in the air to form acids, which return to the ground as acid rain. It is important to note that acidified clouds could travel great distances before releasing the acid rain.

Soil degradation. In soil, acid rains combine with nutrients needed by plants to form compounds that may be of little or no use to plants. Thus, acid rains remove useful nutrients that support plant life. This could adversely affect agriculture.

Water pollution. Water bodies are polluted when acid rains dissolve toxic substances such as aluminium and mercury and deposit them in water bodies including underground water. Acid rains also make water bodies acidic. Acid rains could cause lakes, ponds and rivers to loose aquatic. For example, it has been observed that some lakes in Europe have become so acidic that they can no longer support life.

Forest depletion. Removal of useful nutrients when acid rains combine with them could adversely affect plants. Additionally, acid rains attack trees more directly by causing dead spots on the leaves and barks of trees. This reduces the ability of the plants to make their own food through photosynthesis. The dead spots also make the trees vulnerable to insect infestations.

There are regulations worldwide that restrict the amount of SO2 that can be discharged by factories and utilities burning fossil fuels. However, removing sulphur from fuels before combustion is expensive and therefore regulations still allow some SO2 to be discharged into the air

The oil industry adds lead to petrol (gasoline) to help engines run more smoothly. Vehicles that burn leaded gasoline pour out leaded fumes that contaminate the air. The World Health Organisation (WHO) has established that smoke from the combustion of leaded fuels in vehicles causes cancer and high blood pressure in adults and in children it impairs mental development, reduces intelligence thus hindering learning ability and causes behavioural disorders.

Technological advances in vehicle engine design have made it possible for engines to run on unleaded petrol. Today lead-free petrol does not have negative effect on new vehicles but many older-models need to have their engines adjusted. Leaded fuel has now been phased out in most developed countries and sub-Saharan Africa, but is still in use in some North African and Asian countries. As at the end of 2005, the number of countries using unleaded fuel in the world stood at 85 percent. Ghana adopted the use of unleaded fuel in December, 2003 making her the seventh country in Africa to join the league of nations using unleaded fuel.

This is leakage of fuel oil from storage vessels, oil tankers, pipelines, tanker trucks or other vessels used for transporting fuel oil. Oil spills seriously damage the land, vegetation, and water bodies, including the oceans. Fuel oil is poisonous if ingested by animals. In addition, spilled oil damages the feathers of birds or the fur of animals, often causing death.

Excavated areas that have been strip mined for coal but are not filled and revegetated cause water pollution as surface water runoff from the mined area can flush sediments and sulphur-bearing compounds into nearby streams and rivers. This could endanger human life, plant and wildlife communities.

Emissions from vehicles, thermal power plants and factories contain unburned hydrocarbons, particulates, carbon dioxide, carbon monoxide and oxides of nitrogen and sulphur that contribute to the lowering of the quality of air. These substances in the air could irritate the eyes, throat and the lungs.

Problems Associated with the Use of Fuel Wood

As an energy source, wood has one major disadvantage. It is not a clean- burning fuel and therefore creates high levels of air pollution. Also, the competition for wood is increasing. Its use as fuel is competing seriously with its use in the construction, paper and furniture industries. In many areas there is now an acute and growing shortage of firewood, with its attendant problems of deforestation, soil erosion and increasing amounts of human labour in fuel wood gathering.

Problems Associated with the Use of Uranium

In the process of generating electricity from NPP, small particles and rays (radiations) are emitted and nuclear waste that is radioactive is also produced. Radioactive material has unstable nucleus. To achieve stability, the unstable nucleus breaks apart, giving off radiations in the process. When the radiation penetrates the human body, it causes changes in some of the atoms in the cells along its path. This causes chemical changes that may damage or kill the cells. The total effect on the body depends on the extent of damage and the number of cells killed and could include the following.

Apart from the radiation-related problems, nuclear power plants pose thermal or heat pollution as they release much more heat than conventional thermal power plants. To cool its apparatus a nuclear power plant sucks large amounts of cool water from nearby water body such as a river or lake, and then sends the water back warm. With the rising temperature of the river or lake, the oxygen content of the water is reduced. Not only can this kill the aquatic animals in the river or lake, but often it fosters the growth of algae. Decaying algae consume more oxygen. Soon the water may begin to smell and taste bad. 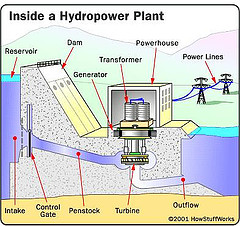 The environmental and economic impact of building a hydro-plant on a local river can be catastrophic. The construction of dams leads to the loss of terrestrial habitats through flooding and the displacement of people often from some of the world’s most fertile land. Dams also destabilize freshwater ecosystems worldwide. For example, a significant proportion of the world’s freshwater fish are now endangered or extinct as a result of the construction of dams. Also affected are oceanic fish such as salmon, which can be blocked in their attempt to swim back upstream to spawn. Even the generally held view that hydropower is pollution free is now in doubt. This is because rotting organic matter that ends up in the dams releases large amounts of greenhouse gases, mainly methane, into the atmosphere. There is also the social cost. The construction of dams is also accompanied by increase in water-borne diseases like bilharzias.

Problems Associated with the Use of Wind Energy

The major problem associated with the harnessing of wind energy is noise pollution. The noise generated from wind farms can be a nuisance. People living close to wind farms have complained about the whamming noise. Additionally, there are other problems that are relatively less serious. Among them is visual pollution. Wind turbines erected on hill sides distort the natural beauty of the hills. Wind mills cause TV and radio interference. There could also be damage or injury from possible mishaps in cases where there is danger that rotors might break or shed ice. The blades of the rotating rotors hit and kill flying birds.

In spite of the numerous problems associated with the harnessing and utilization of energy, total use of energy worldwide must increase substantially to meet the needs of the growing populations and economies. As we cannot avoid using energy, solutions must be found to the problems that arise from energy harnessing and utilization. Consequently, several “clean” technologies have been designed to address specific energy-related environmental problems, for example installation of pollution control equipment such as SO2 removal equipment in industry and thermal power plants.

Apart from technological interventions, the following solutions could help address the problem of depletion and environmental damage associated with the harnessing and utilization of energy.

Educational institutions, especially tertiary, could help facilitate the realization of the two solutions enumerated above by introducing courses in energy education. Such courses should seek to: