Lesson 4: Apprehension and prosecution of offenders 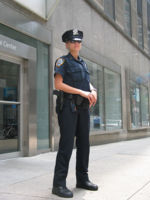 showing the beauty of a peace officer,image provived courtsy of flickr.com

This is another aims and objective of the police,this duty is commonly perform by the police everyday in the communities.Eventhough the right to arrest an offender is not exclusive to the police,private persons who arrests an offender is suppose to hand him/her over to the police for investigation and possible prosecution to commencec or orthewise any orther action that may follow.

An arrest is the action of the police, or person acting under the law, to take a person into custody so that they may be forthcoming to answer for the commission of a crime. In many legal systems, an arrest requires mere verbal information to persons that they are under arrest; the laying of hands or restraints upon the arrested person is usually not required to effect an arrest. Also, there are certain non-criminal arrests that allow for the seizure of representatives not present in the legislative body lacking a quorum, and the forfeiture of property. For serious crimes, the police typically take suspects to a police station or a jail where they will be incarcerated pending a judicial bail determination or an arraignment. In other instances, the police may issue a notice to appear specifying where a suspect is to appear for his arraignment.}}