The efficient use of energy requires the use of storage systems that permit a proper matching of demand for electricity with generating capacity without excessive investment in generating capacity. The basic problem is that demand for energy varies with day of the week, time of the day, season and weather conditions. There must be enough generating capacity to match peak demand, and ideally, production and demand ought to be matched at all times. Certain types of generating equipment can be shut down or restored quickly, for example, small gas turbines have a low response time and the sluice gates of hydroelectric power stations can be operated fairly rapidly. However, large fossil fuel or nuclear power stations are not amenable to frequent shutdowns. Moreover, they are at their most efficient level when run at a fairly constant power output. It is therefore, advantageous for generating boards or authorities to run their large stations continuously and to find some means by which the excess power they generate when demand is low can be stored for use during peak load conditions.

Energy storage is also of relevance to in the field of power production from natural sources – solar, wind, waves, tides, etc. a number of these sources suffer from a common disadvantage in that they are intermittent. If these sources are ever to be used as first choice power units, then they must be linked to efficient systems of storing energy during periods of peak production in order to make energy available during barren times.

Energy storage usually involves conversion. In the absence of practical system for the direct storage of electricity, storage is accomplished by conversion of electricity into some other form of energy, which can be re-converted to electricity as needed. Some energy is usually lost in the process of conversion or storage. Energy storage systems currently in use include: battery, flywheels, compressed air, chemical energy systems and pumped storage (pumped hydro). 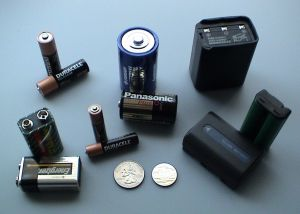 Energy is stored chemically and later re-converted into electrical energy as needed. This is the principle of electrochemical storage. The traditional electrochemical power unit is the battery. There are two distinct types of battery, namely primary and secondary batteries. Primary batteries convert some of the chemical energy stored in certain compounds into electrical energy through reactions in an electrolyte. Once these reactions have proceeded to completion, the battery becomes exhausted as a power source and is then discarded. Examples of a primary cell include zinc-carbon cell (dry cell) and zinc-manganese oxide cell (alkaline battery). The popular “Duracell” and “Energizer” batteries are examples of alkaline batteries, while “Eveready” is a zinc-carbon cell.

In secondary batteries the electrolytic reactions that take place during the discharging process can be conveniently reversed. Once the reactions are complete, electrical power can be applied to the terminals in such a way as to cause the reverse reaction to occur, that is, to charge the battery. This charge-discharge cycle can be repeated many times before the useful life of the battery is complete. Lead-acid battery, nickel-cadmium battery and lithium battery are examples of secondary batteries.

Batteries in general, have low storage capacity and therefore huge numbers would be required to store a quite substantial energy. In addition, they give out only direct current (DC), whilst the electricity most demanded in our homes and industry is alternating current (AC).

In compressed air storage, energy is used to compress air for use in many applications, including the operation of air turbine for generating electricity during peak-demand periods. Electrical energy from a thermal power plant is used to compress the air during off-peak periods. During this process, a motor receives electricity from the grid and runs a compressor system, which compresses the air and is sent for storage. During peak-demand periods, the compressed air goes to a heat exchanger (recuperator) where it is heated by hot gases exhausting from the gas turbine. The resulting relatively high temperature, high-pressure gas expands in a gas (air) turbine, which drives a generator to produce electricity. The whole process is summarized in Fig 3.1. Compressed air has a small amount of energy per unit volume and therefore, extremely large storage capacity is required for any meaningful amount of electricity.

Hydrogen is produced using electricity to split water into hydrogen and oxygen during the electrolysis of water (2H2O 2H2 +O2). Straightforward thermal dissociation is also possible but requires high temperatures (about 2500 0C). The hydrogen could be stored and transported for use as fuel or chemical feedstock. The storage of hydrogen once produced can be accomplished in several ways, including:

The potential uses for hydrogen are indeed many. Once produced, the hydrogen may be used as follows:

Hydrogen has many advantages as fuel including the following.

The flywheel is another means of storing energy. When the generating equipment is producing electricity, some could be used to drive a motor, which in turn rotate he mass – a flywheel. When electricity is no longer being produced, the rotary kinetic energy stored in the flywheel could ‘take over’ and drive the generator to produce electricity. However, they would have to be extremely large to handle the storage for an electric utility. 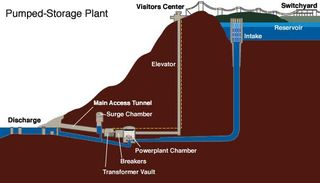 Pumped Hydo: Image provided by Wikimedia - http://en.wikipedia.org/wiki/Pumped-storage_hydroelectricity
This is the most widely used storage system for storing electricity in large quantities. For this system, electricity is used to pump water into elevated reservoirs during periods of low electricity demand. The potential energy in the water is recovered and converted to electricity in a hydroelectric water power plant during peak demand periods. Underground pumped storage is also used. The elevated reservoir is at ground level and the hydro generator is placed in a subterranean cavern.

During off-peak periods, surplus electrical power is used to pump water to from a lower to an upper reservoir in which it is stored, the electrical energy being converted into gravitational potential energy of the water. During the peak demand period, the system is run in reverse as a straightforward hydroelectric power station. The pump used to drive the water uphill and the turbine used to generate electricity on the return journey of the water is actually one and the same. It is designed in such a way that by rotating in opposite senses it can act as either a pump or a turbine. It acts as a pump when it consumes electricity and pumps water uphill; it acts as a turbine when it produces electricity under the action of the water on its return journey downhill.

Typically, modern pumped storage schemes can achieve efficiencies close to 80 percent, twice the efficiency of the best fossil fuel power plants. This means, about 20 percent of the electrical energy is lost in one complete pump –generate cycle. A pumped-storage power station differs from a normal hydroelectric power station in that it has two reservoirs, and uses the same water over and over. During the off-peak period, surplus electricity produced by conventional power stations is used to pump water from a lower reservoir to the upper reservoir. Here, the water is stored until it is needed to provide electricity during peak demand periods. The use of pumped-storage power stations is expanding worldwide for three reasons. First, they can contribute to peak load generating capacity. Second, they are capable of a rapid response to a sudden load adjustment. Third, they make it possible for the generating equipment to run at a fairly constant power output, which makes it more efficient. Consequently, the overall efficiency of electricity generation is increased. 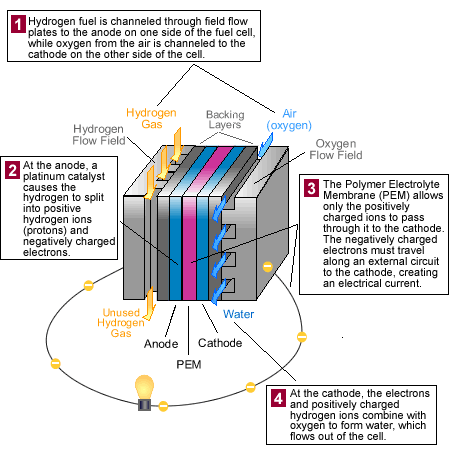 A fuel cell is a device in which the energy of an electrochemical reaction is converted into electrical energy with a continuous supply of reactants in a galvanic cell. A fuel cell differs in concept from a battery in that a continuous supply of reactants is made available to the two electrodes of the cell. Fuel (normally hydrogen) is supplied to one electrode and an oxidant, usually oxygen or air, is supplied to the other. The fuel and the oxidant then combine in the form of ions to produce electricity. Unlike a battery, a fuel cell does not run down; it operates as long as fuel and an oxidant are supplied continuously from outside the cell.

The two electrodes of a fuel cell are of opposite charges and are separated by an electrolyte, a substance that allows charged particles (ions) to pass through it. Fuel is made available to the anode (positive), and an oxidant is fed to the cathode (negative). In a hydrogen cell, hydrogen is made available to the anode, while air is supplied to the cathode. The anode of the hydrogen fuel cell strips electrons from the hydrogen atoms thus producing electron-deficient hydrogen atoms i.e. positively charged hydrogen ions. The electrons move from the anode through the external part of the electric circuit to the cathode, creating an electric current that can be tapped to provide power. The positively charged hydrogen ions meanwhile pass through the electrolyte to the cathode. There the electrons that passed through the external part of the circuit recombine with the hydrogen ions to produce hydrogen. Oxygen (from the air) reacts with the recombined hydrogen to produce water. Water produced at the cathode is removed continuously to avoid flooding the cell.

Some utility companies in some countries offer reduced off-peak tariffs when demand is low, for example, during the night. This off-peak power is stored by suitable means of thermal storage available to the consumer and later used for space heating. The storage medium may include alumino-silicate bricks in storage heaters and the concrete floor (underfloor heating).