Bangladesh has about 230 small and large rivers, and a large chunk of the country's 140 million people depend on them for a living and for transportation. 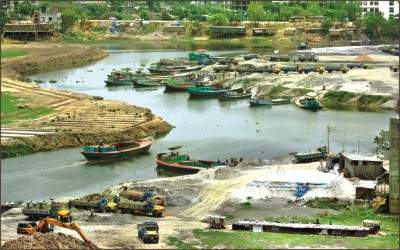 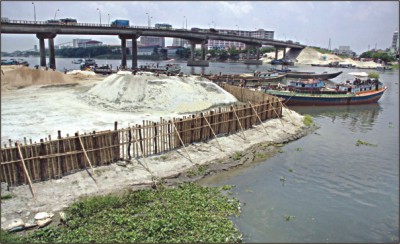 The Buriganga Second Bridge in Postogola overlooks a significant part of the river. Anybody standing on the bridge would have a clear view of the river and easily realise how shamelessly and ruthlessly encroachers have squeezed the lifeline of the capital.Encroachment on the Buriganga over the years was so severe that the Shyampur side of the bridge has become just like a bottleneck. A river view project of Bashundhara has filled up a part of the river and its shore on the Keraniganj side. On the other side beside the Navy jetty, a five-storey building is standing in a place, which was part of the Buriganga just five years ago.

A lush green lawn and a well-planned pond increase the beauty of the building, which in fact choked the river here. It all happened in the past and no-one cared. But even now an encroacher is demarcating the river erecting bamboo poles in the waters.

Encroachment on the Buriganga by different vested quarters was so extensive that they even built markets and other structures after filling up the river. The government took some initiatives to remove the illegal structures, but the moves never yielded any tangible result. Not only the Buriganga, industrialists and local influential people are encroaching on the Shitalakhya river indiscriminately. Just under the Kanchpur Bridge, sand traders and stone crushing companies are doing business occupying the river banks, while industries have encroached on the other side.

Back at the Buriganga bridge, vast encroachment was visible just beside the BIWTA jetty in Shyampur which once used to be called the jetty of Army Welfare Trust.

The BIWTA authorities are now dredging the Balu river in an attempt to make only a 100-foot channel navigable as the river has been narrowed down by encroachers. The river here was around 200 metres wide and the main communication channel between the northern and northeastern parts of the country.

The government formed a taskforce on rivers which recommended in 2006 that at least 100 metres of the Balu's width be restored. The authorities, however, are working to restore only one-third of the recommended width. 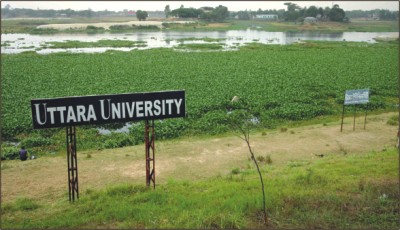 According to the law, it is prohibited to change any natural land in the capital and all municipalities for conservation of all playgrounds, open space, parks and natural reservoirs. If anyone violates the law, they should suffer five years in prison and may also be fined up to Tk 50,000. 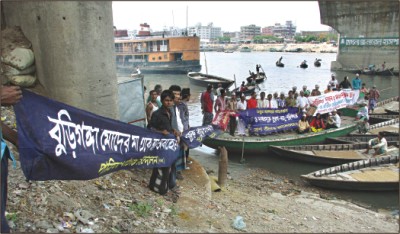