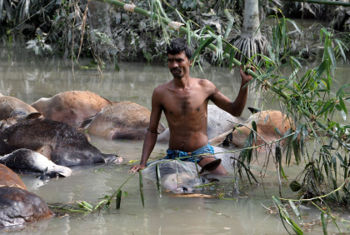 With the tropical climate and unstable landforms, coupled with high population density, poverty, illiteracy and lack of adequate infrastructure, India is one of the most vulnerable developing countries to suffer very often from various natural disasters, namely drought, flood, cyclone, earth quake, landslide, forest fire, hail storm, locust, volcanic eruption, etc. Which strike causing a devastating impact on human life, economy and environment? Though it is almost impossible to fully recoup the damage caused by the disasters, it is possible to (i) minimize the potential risks by developing early warning strategies (ii) prepare and implement developmental plans to provide resilience to such disasters (iii) mobilize resources including communication and telemedicine services, and (iv) to help in rehabilitation and post-disaster reconstruction. Space technology plays a crucial role in efficient mitigation of disasters. While communication satellites help in disaster warning, relief mobilization and tele-medicinal support, earth observation satellites provide required database for pre-disaster preparedness programmes, disaster response, monitoring activities and post-disaster damage assessment, and reconstruction, and rehabilitation. The article describes the role of space technology in evolving a suitable strategy for disaster preparedness and operational framework for their monitoring, assessment and mitigation identifies gap areas and recommends appropriate strategies for disaster mitigation in comparison with likely developments in space and ground segments. 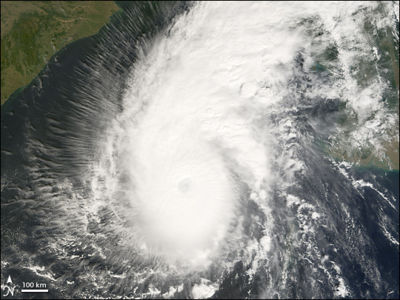 various disasters like earthquake, landslides, volcanic eruptions, fires, flood and cyclones are natural hazards that kill thousands of people and destroy billions of dollars of habitat and property each year. The rapid growth of the world's population and its increased concentration often in hazardous environment has escalated both the frequency and severity of natural disasters. With the tropical climate and unstable land forms, coupled with deforestation, unplanned growth proliferation non-engineered constructions which make the disaster-prone areas mere vulnerable, tardy communication, poor or no budgetary allocation for disaster prevention, developing countries suffer more or less chronically by natural disasters. Asia tops the list of casualties due to natural disaster. Among various natural hazards, earthquakes, landslides, floods and cyclones are the major disasters adversely affecting very large areas and population in the Indian sub-continent. These natural disasters are of (i) geophysical origin such as earthquakes, volcanic eruptions, land slides and (ii) climatic origin such as drought, flood, cyclone, locust, forest fire. Though it may not be feasible to control nature and to stop the development of natural phenomena but the efforts could be made to avoid disasters and alleviate their effects on human lives, infrastructure and property. Rising frequency, amplitude and number of natural disasters and attendant problem coupled with loss of human lives prompted the General Assembly of the United Nations to proclaim 1990s as the International Decade for Natural Disaster Reduction (IDNDR) through a resolution 44/236 of December 22, 1989 to focus on all issues related to natural disaster reduction. In spite of IDNDR, there had been a string of major disaster throughout the decade. Nevertheless, by establishing the rich disaster management related traditions and by spreading public awareness the IDNDR provided required stimulus for disaster reduction. It is almost impossible to prevent the occurrence of natural disasters and their damages. However it is possible to reduce the impact of disasters by adopting suitable disaster mitigation strategies. The disaster mitigation works mainly address the following: (i) minimise the potential risks by developing disaster early warning strategies, (ii) prepare and implement developmental plans to provide resilience to such disasters, (iii) mobilise resources including communication and tele-medicinal services and (iv) to help in rehabilitation and post-disaster reduction. Disaster management on the other hand involves: (i) pre-disaster planning, preparedness, monitoring including relief management capability. (ii) prediction and early warning. (iii) damage assessment and relief management. Disaster reduction is a systematic work which involves with different regions, different professions and different scientific fields, and has become an important measure for human, society and nature sustainable development. 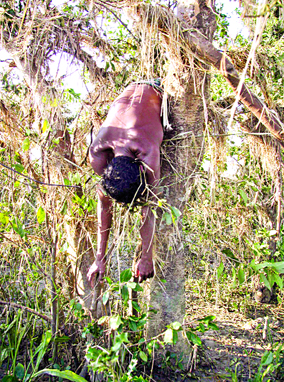 Bangladesh is a disaster-prone country of an area of about 1,47,570 sq. km. with population nearing 140 million. Bangladesh becomes the worst victim of natural calamities causing colossal loss of lives and properties. The adverse impacts of all the natural hazards affecting socio-economic condition need to be reduced for sustainable development. On realization of this reality, the Government of Bangladesh has undertaken a lot of plans and programs for disaster reduction through disaster management.

An event, natural or man-made, sudden or progressive, that seriously disrupts the functioning of a society, causing human, material, or environmental losses of such severity that the affected community has to respond by taking exceptional measures. The disruption, (including essential services and means of livelihood) is on a scale that exceeds the ability of the affected society to cope with using only its own resources

1. Disaster management includes all aspects of planning of and responding to disasters. It refers to the management of both the risk and the consequences of disasters, and includes both

prevention and preparedness measures taken in disaster-prone areas in anticipation of the known hazards – often referred to as “pre-disaster” and long-term rehabilitation (sometimes referred to as “reconstruction”).

Disaster Management Strategy After the floods of late 1980s and the killer cyclone of 1991, the concept of acting only after the occurrence of disaster has been replaced by the concept of total disaster management involving prevention / mitigation, preparedness, response, recovery and development.


The GoB has, therefore, total commitment towards reduction of human, economic and environmental costs of disasters by enhancing overall disaster management capacity.


Efforts have been continuing for optimum coordination and best utilization of resources along-with ensuring community involvement so that they are aware of what they can do for protecting their lives and properties against disasters.


The plan and conduct of disaster management by GoB involve preparedness, response, recovery and mitigation as key notes for building up self-reliance of the community people.

Government as part of disaster management have been trying to develop it's scientific networking in respect of disaster forecasting and early warning.

With grant of Japan Government, replacement of radar at Agargaon, Dhaka , establishment of a new radar at Rangpur and a satellite ground receiving station at SWC, Dhaka have been completed last year to enhance the capability of SWC of Bangladesh Meteorological Department.

Substantial progress in the expansion of flood forecasting and warning services (FAP-10) in the country has been made with the help of Danish Hydraulic Institute. 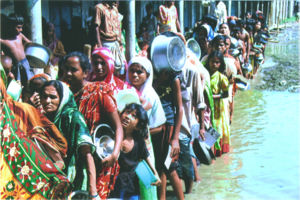 GoB gives equal importance to both structural as well as non-structural mitigation measures.

About 3,931 km. long coastal embankment to protect coastal land from inundation by tidal waves and storm-surges, and drainage channels of total length 4,774 km. have so far been constructed.

For non-structural mitigation GoB has given emphasis on

Disaster Management Draft Act has finalized with the purpose of providing for the formulation of disaster management policy relating to preparedness and emergency measures, and rehabilitation program to deal with disaster.

As part of public awareness activities, booklets containing information about cyclone, flood etc. and calendar, posters depicting disaster points have been regularly printed and distributed up to the grass-root levels.

GoB has decided to make compulsory a session of at least 02 hours on disaster management in the training curricula of all types of Training Institutes to train officials and non officials.