In pattern recognition, the k-nearest neighbors algorithm (k-NN) is a method for classifying objects based on closest training examples in the feature space. k-NN is a type of instance-based learning, or lazy learning where the function is only approximated locally and all computation is deferred until classification. The k-nearest neighbor algorithm is amongst the simplest of all machine learning algorithms: an object is classified by a majority vote of its neighbors, with the object being assigned to the class most common amongst its k nearest neighbors (k is a positive integer, typically small). If k = 1, then the object is simply assigned to the class of its nearest neighbor.

The same method can be used for regression, by simply assigning the property value for the object to be the average of the values of its k nearest neighbors. It can be useful to weight the contributions of the neighbors, so that the nearer neighbors contribute more to the average than the more distant ones. (A common weighting scheme is to give each neighbor a weight of 1/d, where d is the distance to the neighbor. This scheme is a generalization of linear interpolation.)

The neighbors are taken from a set of objects for which the correct classification (or, in the case of regression, the value of the property) is known. This can be thought of as the training set for the algorithm, though no explicit training step is required. The k-nearest neighbor algorithm is sensitive to the local structure of the data.Template:Citation needed 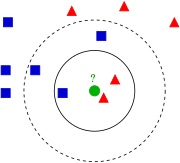 In the classification phase, k is a user-defined constant, and an unlabelled vector (a query or test point) is classified by assigning the label which is most frequent among the k training samples nearest to that query point.

Usually Euclidean distance is used as the distance metric; however this is only applicable to continuous variables. In cases such as text classification, another metric such as the overlap metric (or Hamming distance) can be used. Often, the classification accuracy of "k"-NN can be improved significantly if the distance metric is learned with specialized algorithms such as e.g. Large Margin Nearest Neighbor or Neighbourhood components analysis.

A drawback to the basic "majority voting" classification is that the classes with the more frequent examples tend to dominate the prediction of the new vector, as they tend to come up in the k nearest neighbors when the neighbors are computed due to their large number.Template:Citation needed One way to overcome this problem is to weight the classification taking into account the distance from the test point to each of its k nearest neighbors.

KNN is a special case of a variable-bandwidth, kernel density "balloon" estimator with a uniform kernel.[2] [3]

The best choice of k depends upon the data; generally, larger values of k reduce the effect of noise on the classification, but make boundaries between classes less distinct. A good k can be selected by various heuristic techniques, for example, cross-validation. The special case where the class is predicted to be the class of the closest training sample (i.e. when k = 1) is called the nearest neighbor algorithm.

The accuracy of the k-NN algorithm can be severely degraded by the presence of noisy or irrelevant features, or if the feature scales are not consistent with their importance. Much research effort has been put into selecting or scaling features to improve classification. A particularly popular approach is the use of evolutionary algorithms to optimize feature scaling.[4] Another popular approach is to scale features by the mutual information of the training data with the training classesTemplate:Citation needed.

In binary (two class) classification problems, it is helpful to choose k to be an odd number as this avoids tied votes. One popular way of choosing the empirically optimal k in this setting is via bootstrap method.[5]

The naive version of the algorithm is easy to implement by computing the distances from the test sample to all stored vectors, but it is computationally intensive, especially when the size of the training set grows. Many nearest neighbor search algorithms have been proposed over the years; these generally seek to reduce the number of distance evaluations actually performed. Using an appropriate nearest neighbor search algorithm makes k-NN computationally tractable even for large data sets.

The k-NN algorithm can also be adapted for use in estimating continuous variables. One such implementation uses an inverse distance weighted average of the k-nearest multivariate neighbors. This algorithm functions as follows:

The optimal k for most datasets is 10 or more.Template:Citation needed That produces much better results than 1-NN. Using a weighted k-NN, where the weights by which each of the k nearest points' class (or value in regression problems) is multiplied are proportional to the inverse of the distance between that point and the point for which the class is to be predicted also significantly improves the results.