Introduction to principles of macroeconomics/Markets in aggregate form

Markets in aggregate form: An introduction to macroeconomics

Macroeconomics is the study of the performance, structure, behavior and decision-making of an economy as a whole. Macroeconomists focus on the national, regional, and global scales. For most macroeconomists, the purpose of this discipline is to maximize national income and provide national economic growth. Economists hope that this growth translates to increased utility and an improved standard of living for the economy's participants. While there are variations between the objectives of different national and international entities, most follow the ones detailed below. 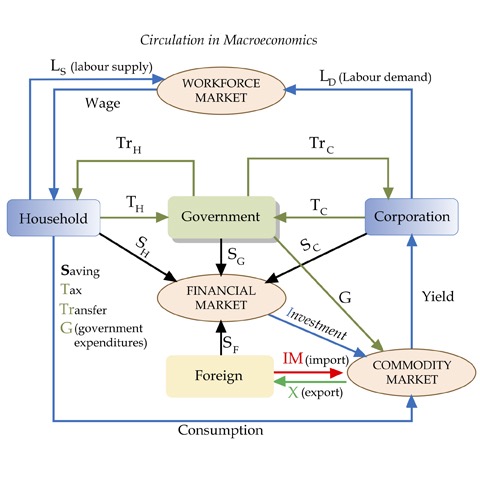 Macroeconomics studies the performance of national or global economies and the interaction of certain entities at these levels.

To achieve these goals, macroeconomists develop models that explain the relationship between factors such as national income, output, consumption, unemployment, inflation, savings, investment and international trade. These models rely on aggregated economic indicators such as GDP, unemployment, and price indices.

On the national level, macroeconomists hope that their models help address two key areas of research:

You can do it here via WeNotes below or you can do this on your computer. Later in the course, after you've learned some more about this topic, you can revisit your answers to see if they still make sense.