Introduction to principles of macroeconomics/Goals, measures, and challenges 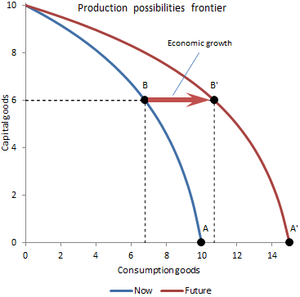 Production possibilities frontier economic growth
A major focal point of macroeconomics is the total output generated within an economy. Measurement of that output includes Gross Domestic Product (GDP), which is the dollar value of all final goods and services produced within a nation's borders during the course of one year. Macroeconomics also focuses on the difference between nominal GDP and real GDP. The latter version removes the effect of inflation, which increases its importance as a useful measure because total output might be increasing in terms of current dollars but not in constant dollars.

Economic growth, which is the increase in real GDP over time, is one of three major goals. The other two goals are full employment and price level stability. Fiscal and monetary policies are formed, implemented, and evaluated against those three goals. You will likely find that macroeconomics focuses on what should be done to achieve those goals as opposed to what is done. Accordingly, the following readings and activities will uncover scenarios and philosophical debates about the role of government in a market-based economy and whether the GDP is an accurate measure of societal well-being, quality of life, and the standard of living.

The overall purpose of this learning pathway is to take a closer look at GDP and definitions of economic growth, value and savings. Your goal is to: