So what is stress?

Stress has both physiological and psychological components. We respond to external events or even imagined events with a generalized set of responses called General Adaptation Syndrome or the stress response, but our responses are to some degree tailored to the nature of the event.

Walter Cannon coined the term the “Fight or flight” response that is commonly used to describe the way in which our body reacts to stress.

Cannon originally found this response in animals, but it was later found to also present in humans. The fight or flight response describes the way mammals respond to a threat. When our ancestors were walking through the jungle, and they came across a threat they needed to decide very quickly if they should fight or run away. The fight or flight response prepares the body almost instantly for these actions.

The Fight or Flight Response

The first stage of the fight or flight response is activation of the sympathetic nervous system. This causes a system-wide response. Adrenaline and noradrenaline are released leading to increased alertness. Blood is diverted from the internal organs and the skin to skeletal muscles. The heart-rate, force of heart contractions, and respiratory rate are increased. The body begins to convert stored glycogen into glucose. All of these changes allow the body to exert a large amount of energy over a short period of time so that the individual may either fight effectively, or run away effectively.

The fight or flight response is designed for response to acute (or short-term) stressors, however many of the stressors that affect modern man may be chronic in nature. Hans Selye developed the General Adaptation Syndrome model to describe the effect of chronic stressors on the body. 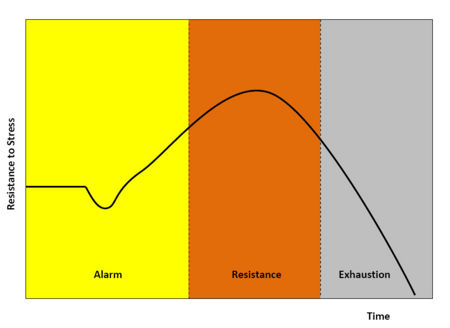 The first stage of the model is the alarm phase. This is where the fight or flight response is activated causing the organism’s ability to resist the stressor to increase. In the resistance phase, the body starts to adapt to the existence of a chronic stressor. In the exhaustion phase the body’s resources become depleted, and body systems start to deteriorate.

The diagram to the right shows what would happen if an individual was presented with a single stressor while all other stressors in their life remained unchanging. At first their ability to deal with the stressor would increase. After a period of time, their ability to resist would stop increasing and would eventually begin to decrease as the individual became worn down by the stressor. Eventually the individual would become unable to resist the effects of the stress, and would become ill.

Selye was an endocrinologist who spent much of his life studying the stress response. He noticed that both good news and bad news stimulated this general response calling negative stress distress and positive stress eustress. Selye saw stress as a generic response which occurred in reaction to any stressor (1974).

In 1976 a medical researcher called Herbert Benson in his studies of transcendental meditation practitioners discovered what he called the relaxation response (Payne, 2005). This is the direct opposite of the fight or flight response.

The relaxation response is mediated by the parasympathetic nervous system, which is also called the resting and digesting system. It works in opposition to the fight or flight response by decreasing heart rate, force of contraction, rate of respiration, and diverting blood away from skeletal muscles to the internal organs, therefore stimulating digestion.

Stress is “a perceptual phenomenon arising from a comparison between the demand on the person and his ability to cope. An imbalance…gives rise to the experience of stress and to the stress response” (Cox & MacKay, 1976) 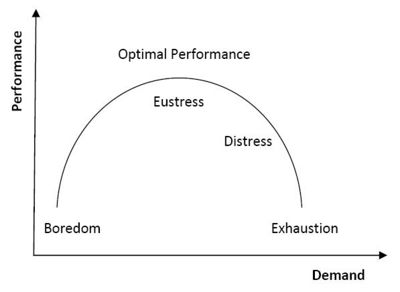 The most interesting implication of this model is that it’s not so much the actual demands that are significant, it’s how we perceive these demands and our ability to cope with them. A person who perceives their ability to cope as weak will experience more stress & vice-versa.

Another interesting implication is that mental wellbeing comes from having an ideal level of stimulation. When we say we are stressed, we really mean that we are under more stress than we can handle. The only time that we are completely free from stress is at death (Payne, 2005).

Psychological stressors are the most common stressors in modern life. Stress caused by worrying about things that may never happen such as losing our job, or our loved ones being hurt is much more common than actually being in a situation where we are physically threatened.