Background of ‘Bangla’: ‘Bengali’ as a language, has written record of at least one thousand years and another thousand years of proto history. Today, ‘Bengali’ is the 5th largest spoken language in the world. We have more than 350 million Bengali Speaking people all over the world. Only in Bangladesh, 150 million people speak in Bengali, second highest is the West Bengal of India and the ‘Third Bangla’ is Britain. We are proud of our language, culture and heritage. Although Bangladesh is a ‘least developed’ country, one day we would like to develop our country as one of the most developed nations of the world with the spirit of the best understanding and unity we have shown during our language movement and liberation war. We salute our heroes sacrificed their lives and blood to free our land, for giving us a flag and country of our own called ‘Bangladesh’.

Background of Ekushey: Ekushey means 21st February of the year 1952. We Bengalis have fought for our Mother Tongue to keep it safe from the then West Pakistani rulers. We sacrificed our lives and blood. Rafiq, Shafiq, Salam, Barkat and a number of others were killed, many others were injured on the 21st February 1952. From that day, we marked Ekushey as a Red Letter Day. And Thus, we, Bengalis saved our Mother Language and every year we observe the ‘21st February’ as ‘Martyrs Day’ or ‘Mother Language Day’, to show due respect and honour to the departed souls of the language martyrs. 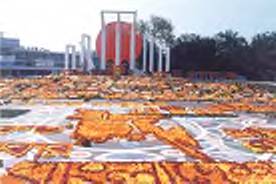 1911 Syed Nawab Ali Chowdhury, a founder of the Dhaka University said -“Bangla should be the medium of instruction of Bengali, whatever other languages are in other parts of India”.

1937: Mowlana Akram Khan demanded Bangla as a State Language of India in his deliberations at Bangla Shahitya.

1940 Sher-E-Bangla A. K. Fazlul Haq in the Lahore Resolution clearly stated that the areas in which the Muslims are numerically in a majority, as the northwestern and eastern zone of India, should be grouped to constitute ‘Independent State’ in which the constituent units shall be autonomous and sovereign.

1946 The Muslim League legislators elected in 1946 General Election, decided to create one Pakistan State comprising the said Muslim majority areas. And just before the creation of Pakistan, Purba Pakistan Shahitya Shangshad committed to the people that Bangla shall be the official language of Pakistan.

1947 Pakistan as a Muslim State came into being. Pakistan had two parts. 56 percent people of the whole of Pakistan lived in East Pakistan and spoke Bangla as their mother language.

On 1st September, Tamaddin Majlis was founded by Prof. Abul Quasem, a Dhaka University teacher along with some other teachers and students. This organisation published a booklet entitled as “Pakistaner Rashtrabhasa - Bangla Na Urdu? Prof. Abul Quasem put forward the basic demands of the language movement in most concrete terms.

On 15th November, a circular concerning the examination of Superior Civil Service was issued by Mr. Goodwin, the Secretary of the Central Public Service Commission of Pakistan, stating that the total number of subjects would be 31 including nine languages like Urdu, Hindi, English, German, French, even dead language like Sanskrit and Latin. Bengali was not included in the examination subject list, although it was the language of the majority people of Pakistan. Many others protested against this circular.

1948 On 4th January, All East Pakistan Muslim Students League was formed. This student organisation made significant contribution in the language movement.

On 25th January, Dhirendra Nath Dutta moved a resolution in the Constituent Assembly, to allow speeches in Bengali side by side with English and Urdu.

On 11th March, a ‘Protest Day’ was observed in all over Pakistan.

On 21st March, Mr Md Ali Jinnah, the Governor-General of the then Pakistan addressed a huge public meeting at the then Ramna Recourse Ground, where he declared that ‘Urdu and only Urdu shall be the State language of Pakistan’.

In protest of the statement some of the students present in the above meeting, shouted saying “NO NO”. In continuation of the protest, with the help of the Bengali politicians, students of the Dhaka University in particular, started movement to establish BANGLA as a State language of Pakistan. 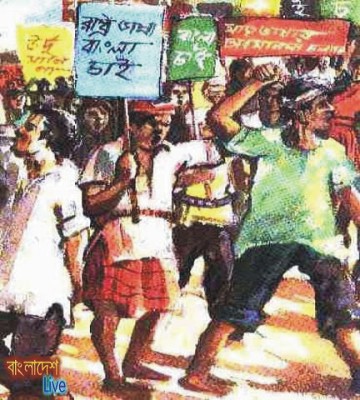 1952 On the 21st February, the students got together at the Dhaka University campus under the leadership of Gaziul Haque, Shamsul Haque and Abdul Matin along with a good number of other prominent student leaders to hold a meeting to decide whether to break CrPC section 144. The meeting decided to break section 144 to go out in the street in groups of 6, 8 and 10. The 1st group of ten led by Habibur Rahman shelly broke section 144 followed by the other groups. At about 3.10 pm police fired on the crowd in front of the Medical College Hostel and killed Salam, Barkat, Rafiq, Jabber and few others alongside with 100 of injures. To respect these martyrs, Bengalis started to observe 21st February as the ‘Language Martyrs Day’.

Draw a Shahid Minar and in 30 words write about it.

A group of ‘Mother Language Lovers of the World’ based in Canada made an application to the United Nations to recognise 21st February as the International Mother Language Day.

There are six thousand dialogues and languages in all over the world. These languages are not practiced or even respected by the government concerned. There are many languages which can not be practiced because they are fallen behind the major languages.

The main object of the above application was to help preserve and practice those languages and dialogues. The second object was to show due respects to the language martyrs of the 21st February 1952. Combining both the objects the Mother Language Lovers from Canada applied to mark the day as “International Mother Language Day” like ‘International Labour Day’, ‘International Women’s Day’.

On 26th October 1999, UNESCO took a regulation on behalf of the UN and declared “International Mother Language Day”. Two veteran Bengali mother language lovers like Rafiq and Salam, both live in Canada, initiated the above application alongside with eight other members of the ‘Mother Language Lovers of the World’. This is why, Rafiq and Salam, both of this generation, are also regarded as Bhasha Shainiks of the present time. The other members are as follows:

The declaration of INTERNATIONAL MOTHER LANGUAGE DAY was made on 26th October 1999 in Paris. This declaration was made not only to advance multilingual education and linguistic diversity but also to protect the basic right to speak in one’s mother tongue and preserve the common heritage of mankind, of six thousand different language speakers from 188 countries of the world.

Every year we observe the day with a detailed program:

After the recognition of Ekushey as the INTERNATIONAL MOTHER LANGUAGE DAY by the UNESCO in 1999, all the people from 188 countries, observe the DAY, and vow to preserve and practice 6000 different languages and dialogues of the world, to protect the basic right to speak in one’s own mother tongue.

The above program for the DAY can be followed by any country, erecting Shahid Minar, holding procession, singing patriotic songs, hold seminars and discussion, presenting special programs in Radios and Televisions and publishing special supplements in their own countries, dedicating the day to protect and practice their own languages and dialogues.

Fill in the blanks

EKUSHEY Its a Bangla word that means 21.But here EKUSHEY means 21st February, 1952 when the language movement of Bangalis was happen.

(a) What do you understand about EKUSHEY write in 50 words.

(b) Write how we observe EKUSHEY.


a) URDU and only URDU