This is based on New Zealand Qualification Authority Unit 8031 [1] entitled "Demonstrate knowledge of immunology.”

Physical barriers: Skin and mucous membrane are rarely penetrated by microorganisms due to their outer layer called epidermis and epithelium consisting of multiple layers of tightly packed cells.

Microbial competition: Microorganisms found on the skin or mucous membranes which are not totally harmful, by means of competing with potential pathogens through consuming nutrients, making the nutrients unavailable to pathogens.

Lysozyme is an enzyme that destroys the cell walls of bacteria.

Interferon are protein molecules naturally produced by a cell of the immune system in response to viruses, parasites and tumor cells that inhibit the spread of viral infections.

Fever: The increased body temperature enhances the effects of interferons, inhibits the growth of some pathogens.[3]

Complement : series of proteins which attach to the surface of bacteria, regularly causing them to lyse.[4]

In the upper respiratory tract of a human, there are many cells that have cilia. These cells use their cilia to move mucus away from the lungs that the body produces. The mucus is a sticky substance that traps microbes, dust and other foreign matter that may be breathed in, before it reaches the lungs.

A video representation of immune response[[6] [[7]

Cellular immune response: is a kind of specific defence mechanism mediated by T cells against antigens from viruses or parasites. Include macrophages, TH cells, soluble lymphokines, B cells, TC cells and phagocytes.

Adaptive immune system is considered as a specific line of defence mechanism because its response is antigen specific. B cells and T cells are derived from haemopoietic stem cells in the bone marrow. B cells proceeds general immune response while T cell produce cell mediated immune response.[10]

B lymphocytes: B cells are produced in the bone marrow. They are developed into one of two types, memory B cells or plasma cells, after activation by antigen interaction. The plasma cells produce a lot of antibodies and the antibodies lives for a short time, but the memory B cells will remain dormant in your body for many years.[11]

Antibodies (immunoglobulins) are produced by a B cell. They are trained specifically to attach to, and inactivate foreign bodies, such as antigens. An antibody recognizes the unique part of an antigen and tags it for destruction and also neutralizes the antigen.[12]

Immune responsive cells can be divided into five groups based on:
i) the presence of specific surface components and
ii) function: B-cells (B lymphocytes), T-cells (T lymphocytes), Accessory cells (Macrophages and other antigen-presenting cells), Killer cells (NK and K cells), and Mast cells[13].

Antibodies are typically made of basic structural units—each with two large heavy chains and two small light chains. Although the general structure of all antibodies is very similar, a small region at the tip of the protein is extremely variable, allowing millions of antibodies with slightly different tip structures to exist.[14] Five different antibody isotypes are known in mammals, which perform different roles.[15]

IgA: Found in mucosal areas, and prevents their colonization by pathogens. Present in milk, tears, and salivas

IgG: The majority of antibody based immunity against invading pathogens

IgM: First response antibody. Eliminates pathogens in the early stages of B


ANTIBODY- FINE STRUCTURE AND HETEROGENEITY outlines the structure and classification of mammal antibodies.

This give an information about structure and classification of antibodies[16]

Each vaccine contains a killed or weakened form of organism causes a particular disease. After being vaccinated, B lymphocytes detect the antigens in the vaccine and antibodies are produced.[17]

Immunization outlines the role of immune response in vaccination and inoculation.

Monoclonal antibodies(MAb or MoAb) are mono specific antibodies that are identical because it produced from one type of immune cells that are clones from a single parent cell. It is produced by fusing myeloma cells with the spleen cells of a mouse which has been immunized with a specific antigen.[20]

Monoclonal antibodies are able to recognize (by binding to) virtually any antigenic determinant and to discriminate between even similar epitopes.[21] 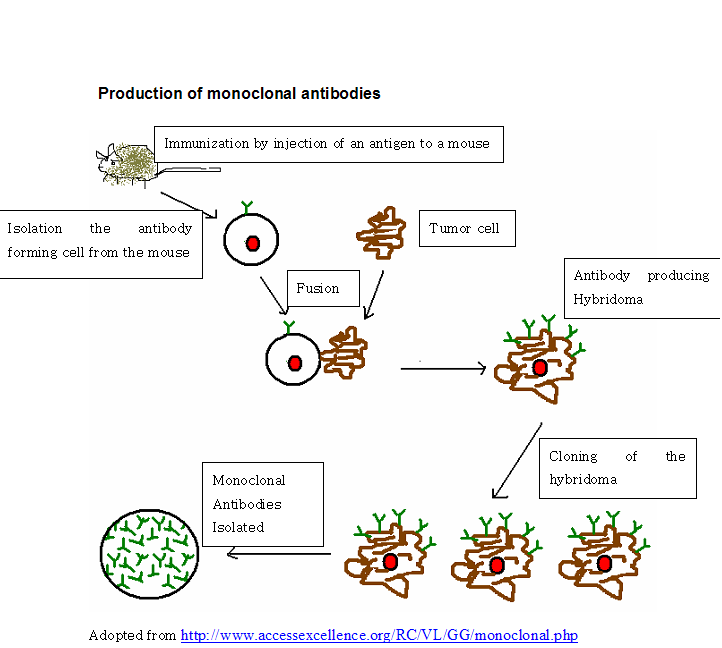 A video representation of the production of monoclonal antibodies[23]

1. Chimeric antibodies. The antibody combines variable regions of the mouse antibody with the constant regions of a human antibody.

Use: Abciximab inhibits the clumping of platelets by binding the receptors on their surface which linked by fibrinogen. It helps to prevent the reclogging (rest enosis) of the coronary arteries due to angioplasty.

2. Humanized antibodies. The antibody combines only the amino acids which makes the antigen binding site (the hypervariable regions) of a mouse (or rat).

FDA approved monoclonal antibodies have the variety of practical uses[25]:
1. Abciximab is a chimeric one use for inhibition of glycoprotein11b/111a
2. Adalimumab is a human type used for chronic lymphocytic leukaemia
3. Ibritumomabtiuxetan is a murine type used for non-Hodgkin lymphoma

Monoclonal antibodies are widely used as diagnostic and research reagents. here are some examples of usages, and problems of using monoclonal in human theraphy[27].

Monoclonal Antibodiesexplains the production and properties of monoclonal antibodies.