Candidates should be able to install and configure X11.

The X Windows system was developed as the display component of Project Athena at the Massachusetts Institute of Technology. It is the graphical environment for UNIX. The X Window system for Linux is based on the freely distributable port of X Window version 11 release 6 (Commonly referred to as X11R6).

This freely distributable port is commonly known as xfree86 for the 80386/80486 and Pentium processor families. Since its initial port, Xfree86 has been ported to other computing platforms, including System V/386 and 386BSD. 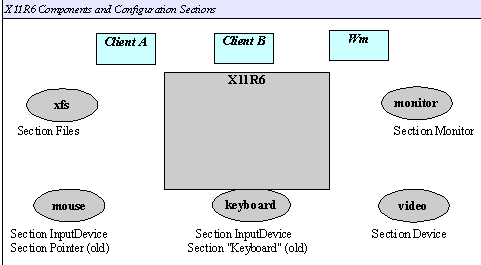 The above diagram shows the components of the X11R6 server. The “Section” names refer to configuration sections in the XF86Config configuration file (covered in the next section).

The two clients depicted on top of the server are so-called x-applications (e.g. xclock or xterm). The window manager is also a client. Window managers add “windowing” facilities around the other x-application clients, allowing functionalities such as window dragging, focus, iconification, etc.

Two of the configuration utilities provided with the Xfree86 software are the XF86Setup and xf86config scripts. Other vendors have specific utilities such as:

Once the server has been configured one can change the horizontal and vertical settings for the monitor with xvidtune.

All the above mentioned configuration utilities will create and edit the XF86Config configuration file. This file is read at start up by the X Server and determines its behavior. This file is typically found in the /etc/X11 directory, and this is its’ full path: /etc/X11/XF86Config.

There are 11 configuration sections in the config file, they are listed below:

One of the first sections is the Section “Files”. The FontPath keyword tells whether to get fonts from a local directory or from a font server. The RgbPath keyword is used to indicate the full path to rgb text file used to map color names to RGB notation:

Where trans is the transport type unix, hostname is the fully qualified domain name of the font server, and port is the port to connect to, usually port 7100.

Below is a sample XF86Config file:

X clients are configured using the .Xresources or .Xdefaults file. These file are kept in the users home directory. It is not automatically created by default, as system-wide defaults are also available for each program.

Below is an extract from a .Xresources:

Each of these directives is a system default directive that describes how a client will be displayed. Each line consists of the client name followed by an asterisk and the X Window parameter. Through a carefully configured .Xresources file the user can define the way a client will look each time it is started.

Most native X clients such as xterm or xclock have a -display switch which can be used to set the display. But the easiest method is to set the environment variable called DISPLAY!

The next two commands are equivalent:

An X session can be started using 2 methods:

Method 1: From the command line, after logging in onto a virtual terminal the user launches the X Server using a script called startx

Method 2: A Display Manager is running prompting the user with a graphical login, this is available for a specific runlevel (on RedHat type distributions this is runlevel 5).

From the Command Line

The startx script starts xinit. The xinit script has two main arguments (a) the X server and (b) the xinitrc script. The xinitrc script will source (read) the files Xresourses (controlling the x-applications) and the Xclients (choosing a window manager). So we can trace the startup sequence as follows:

The area that is commonly referred to as the desktop is also known in the X Window world as the screen. It covers the entire area of your monitor display. The root window is the background of your screen, typically used to display a colour or picture. The window manager provides an interface between the user and the X server. It is virtually impossible to use X without a window manager, because it provides the title bar and the familiar buttons with which you manipulate the display.

In addition to the different window managers there are also various desktop environments, among which the most common are KDE, GNOME and XFCE.

Below is a brief list of integrated window managers: