When an x86 computer starts up it follows a predefined set of steps to boot the operating system. On start up the CPU jumps to the address of the BIOS and proceeds to load it. The BIOS performs some checks and initializes hardware before locating the configured boot device. The boot device is configured in the BIOS user interface by setting the boot order of attached mass storage devices.

The second stage boot loader has the task of loading the operating system for Linux; this means the Linux kernel and initial ram disk. The second-boot loader may present the user with a menu to select which kernel to boot and may even allow the user to boot heterogeneous operating systems (aka dual boot).

Once the 2nd stage boot loader has loaded the kernel it passes control over to it, The kernel starts and configures the CPU type, interrupt handling, the rest of memory management such as paging tables and memory paging, device initialization, drivers, etc.

Once the kernel is fully operational it starts an initial programme which by default is /sbin/init. The init programme sets up user space and starts the login shells and/or the graphical login. What services are started and the state of the machine after the init process has completed its initialization depends on the default runlevel and its configuration. 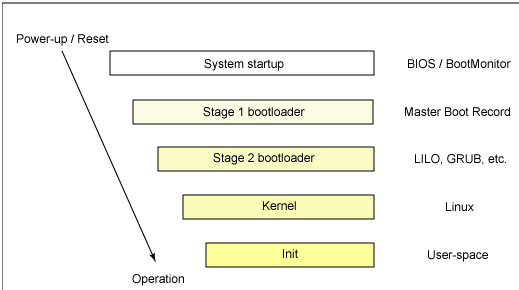 There are two widely used boot loaders for Linux, namely GRUB and LILO. Both boot loaders are broken into at least two stages. The first stage is a small machine code binary on the MBR. Its sole job is to locate and load the second stage boot loader. The 2nd stage boot loader then locates and loads the Linux kernel passing in any parameters with which it has been provided.

When the 2nd sage boot loader is running, you are presented with an opportunity to pass additional parameters to the Linux kernel via a text console that is part of the boot loader. Typical parameters that you may pass to the kernel include:

init – overrides the process that is run by the kernel after it has finished loading. “init=/bin/bash” is used to bypass the login prompt in cases where the root password had been forgotten. Because this gives access to a root shell, this also highlights why it is important to have good physical access controls to the computer console and why it is a good idea to secure your boot loader with a password. This will prevent users from modifying the boot-time kernel parameters.

noacpi – turns off the advance configuration and power interface capabilities of the Linux kernel. Often needed in the case of a buggy BIOS.

There are many more parameters that can be passed to the kernel at boot time. Please consult the kernel documentation for more options.

Once the kernel has finished loading it starts the init process. Init is responsible for checking and mounting file systems, and starting up configured services, such as the network, mail and web servers for example, it does this by entering its default runlevel. This is configured in the /sbin/init application configuration file /etc/inittab. An example of the inittab file is given below:

Aline in the inittab file has the following format:

Line 8 is for the sysinit action, this process is run for every runlevel.

Line 10 – 16 define the scripts that should be run for each runlevel.

Line 19, 25, 28 define the processes to be run when the specified actions occur. These actions are:

Line 32-37 spawn the console logins. They are set to automatically restart when the process dies.

After it has spawned all of the processes specified, init goes dormant, and waits for one of three events to happen:- processes it started to end or die, a power failure signal or a request via /sbin/telinit to further change the runlevel.

Systemd is a system and service manager for Linux, backwards-compatible with SysV and LSB init scripts. So it can be installed on any Linux that uses sysvinit or as a replacement.

systemd brings efficiency by providing faster startups by parallelizing processes startup, this is achieved by activating D-Bus(Desktop Bus) which uses Unix domain sockets for inter-process communication, processes are able to run parallel to each other without acknowledging if the daemons they depend on are actually running.

It also offers on-demand starting of daemons and serves as the full-time dynamic resource manager to a running system rather than simply starting the system and then going to sleep until the next reboot as it is with sysvinit.

You will need to tell your kernel to run the init provided by systemd, this is achieved by changing the init kernel parameter to pint to /usr/bin/systemd:

Upstart is an event-based replacement for the/sbin/init daemon which handles starting of tasks and services during boot, stopping them during shutdown and managing them while the system is running. Upstart comes with a set of default jobs which it installs into /etc/init. These are based on the sysvinit configuration of Debian based systems, including running the /etc/init.d/rcscript.

During boot process the various modules that the kernel loads/probes for their supported hardware , producing copious amount of log output in the processes. These are the console messages that fly-by during system boot.

Since the logging service has not yet been started the kernel logs its messages to an in memory ring buffer. It is called a ring buffer as, once the log has reached a set memory size, earlier messages are overwritten by newer messages.

As this information in the ring buffer could be lost on reboot or by being overwritten most distributions write the ring buffer entries to disk either under /var/log/dmesg, /var/log/messages or /var/log/syslog depending on their logging service configuration.

If you have hardware that is not being configured properly during boot the ring buffer is a good place to look for clues as to what could be wrong as usually the driver will write out some error message that can help in resolving the issue.

Beside the ring buffer you can also by examining the system log files configured by the logging service. These files are located under /var/log and may be /var/log/syslog or /var/log/messages.

Failure to boot to command prompt

In other cases you may get a message which says “kernel panic” and the machine automatically reboots, or waits in an unusable state until rebooted. The causes of this kind of problems can be many, from an incorrectly configured initrd image, to a missing root device. The output on the screen, before system failure can provide you with a clue as to the configuration error. This may be due to:

In the cases of incorrectly configured boot loaders you can either enter the boot loader editor during the 2nd stage, by pressing 'e' for the grub loader, or at the lilo prompt, and passing in the correct parameters to get the computer to boot, editing the configuration file once the system has successfully started. In other cases it may be necessary to boot a live CD and then trouble shoot the root file system without mounting it.