For instructional purpose, it is advised that trainers/lectures use lectures, punctuated with short debates as a major means of delivering this module. In addition presentations and exercises are also suitable method of delivery for this module.

In recent years, FOSS has emerged as a key aspect in new business models, as well as in well-established multinational companies, such as Sun Microsystems or IBM. Without a doubt, FOSS is managing to jump the gap from technology enthusiasts to large majorities and corporate environments.

On the other hand, FOSS is also emerging as a strong incentive to business creation, with an increase in venture capital investment in the tune of millions of USA dollars. Larry Augustin (2007) projected that FOSS related business alone generated $149 million in 2004, distributed amongst 20 new businesses, to $475 million in 2006, distributed amongst 48 enterprises. Driving this FOSS aided revenue stream is a dedicated group of, mostly, volunteers in various FOSS project and communities. This module explores the co-evolution of FOSS communities and software markets to offer a synergistic outlook into emerging and sustainable FOSS enterprise which is responsive to the needs of the African FOSS business market. However, one is tempted to ask; how is FOSS thus changing traditional software markets? To answer this question, it is important first to think about the rules that have been governing software markets so far.

Costs of production, copy, and distribution

Developing a particular software solution requires a high initial investment, as well as a high potential risk. Until the final product is developed, there is no possibility of revenue generation, and no certainty that the product will be successful. In traditional "shrink-wrapped software" business models, this has meant that a huge amount of resources go into marketing, publicity, and distribution, in order to sell enough copies to recuperate the initial investment.

Part 1: How does FOSS change this?

The existence of development communities can lower the cost of development, but they can potentially also lower the risks. Having input from other developing parties, as well as a huge base of potential testers for early versions can help ensure that the software answers correctly to user's needs. Further, it gives you the chance to build on and use other libraries, instead of starting from scratch or re-inventing the wheel. Initial investment will not be recovered through selling copies, however other related revenues will depend on product adoption. In this respect, distribution and communication costs can greatly be reduced in a FOSS model, since the free availability of the product can act as the best promotion strategy.

The figure below depicts how FOSS communities (for example the Linux kernel) and business enterprises may collaboratively co-exist to create a conducive business climate. 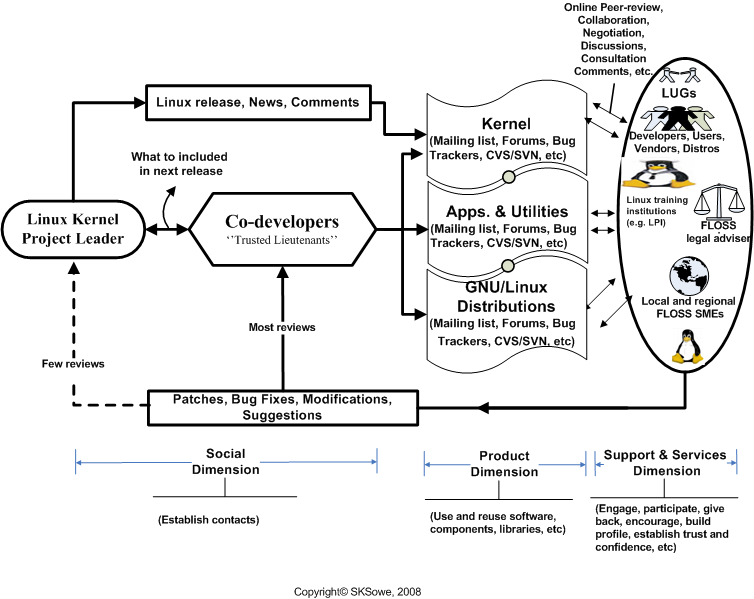 We talk of network effects when the value of a particular product for a given user is larger if many other people also use it.

Mass deployment of a product gives it more value. For example, we can talk of direct network effects regarding e-mail technology. If very few people have e-mail accounts, it is not a very useful technology. However, the more people that use e-mail, the more important it will be to have an account.

Traditional software vendors have used this phenomenon to their advantage by implementing incompatibility policies. Through this kind of strategy, a first comer to a particular field, by gaining a large enough initial user base, can make it very hard for competitors to penetrate, since the only useful product brand will be the one most people use. Software markets are also affected by indirect network effects, related to the existence of complementary products. For example, an operating system will be more useful if there is a wide range of applications that can be installed on it. An ecosystem of applications will only emerge if there is a large enough base of users.

If to this we add the costs of change inherent to software migrations, and the reluctance most users will present to abandoning a well known solution, we arrive at a "winner takes it all" scenario, in which gaining a large enough user base is crucial when penetrating in a new market, and competing with widely adopted products is virtually impossible.

Part 2: How does FOSS change this?

In a well-established market, the only possibility of competing against the proprietary dominant product might be to use a FOSS strategy. An alternative product, free of charge, has the potential of attracting lower-end of the market, or previous non-consumption segments, and thus gathering enough users to tilt network effects on its favour. In this respect, FOSS can be considered a disruptive innovation with the potential of challenging firmly established products and firms. For example, this mechanism lies at the root of OpenOffice.org penetration strategies, and possibilities of success.

On the other hand, FOSS development and the promotion of standard formats and protocols, makes it increasingly easy to harness network effects through compatibility for many software developer.