How to harvest Beche-de-mer

Technique used to fish for Beche-de-mer in deep water

In Solomon Islands, one of the marine products communities on small atoll islands and costal communities harvested to generate income for their families is beche-de-mer(edible sea cucumbers). In 2004 the government of Solomon Islands banned exporting of bech-de-mer due to over harvesting of this marine resource, but in 2007 after the April Tsunami that striked the western part of the country, the government lifted the ban so that local communities could once again harvest beche-de-mer to earn money to cope with the destruction caused by the tsunami. 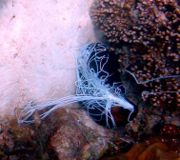