Semiconductors have had a monumental impact on our society. You find semiconductors at the heart of microprocessor chips as well as transistors. Anything that's computerized or uses radio waves depends on semiconductors.

Today, most semiconductor chips and transistors are created with silicon. You may have heard expressions like "Silicon Valley" and the "silicon economy," and that's why -- silicon is the heart of any electronic device. 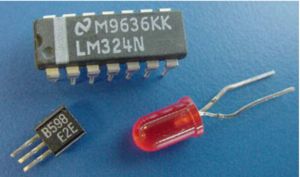 Clockwise from top: A chip, an LED and a transistor are all made from semiconductor material

A diode is the simplest possible semiconductor device, and is therefore an excellent beginning point if you want to understand how semiconductors work. In this article, you'll learn what a semiconductor is, how doping works and how a diode can be created using semiconductors. But first, let's take a close look at silicon.

Silicon is a very common element -- for example, it is the main element in sand and quartz. If you look "silicon" up in the periodic table, you will find that it sits next to aluminum, below carbon and above germanium. 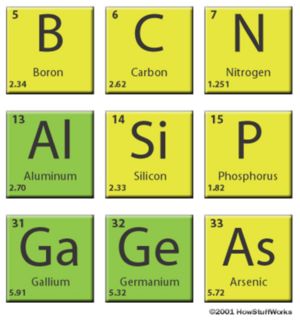 Carbon, silicon and germanium (germanium, like silicon, is also a semiconductor) have a unique property in their electron structure -- each has four electrons in its outer orbital. This allows them to form nice crystals. The four electrons form perfect covalent bonds with four neighboring atoms, creating a lattice. In carbon, we know the crystalline form as diamond. In silicon, the crystalline form is a silvery, metallic-looking substance.

In a silicon lattice, all silicon atoms bond perfectly to four neighbors, leaving no free electrons to conduct electric current. This makes a silicon crystal an insulator rather than a conductor

Metals tend to be good conductors of electricity because they usually have "free electrons" that can move easily between atoms, and electricity involves the flow of electrons. While silicon crystals look metallic, they are not, in fact, metals. All of the outer electrons in a silicon crystal are involved in perfect covalent bonds, so they can't move around. A pure silicon crystal is nearly an insulator -- very little electricity will flow through it.

But you can change all this through a process called doping.