The Warsaw Ghetto Rebellion During the Holocaust

Well, hello everybody!
We are Yakir David Sidler and Alon Joseph James Wendel, and we are a 3-generation to the holocaust.
Our grandparents were present during the holocaust, and that's why we are really close to the subject.
The holocaust was en event which took place in the middle of the 19th century at Europe mainly.
The holocaust was a pure act of racism against gypsies, Slavic and mainly JEWS.
During the holocaust, people were humiliated,punched, kicked, spit at, losing their friends and careers, and then they were separated from their families, enslaved and used to meet the Nazi target, as objects, and not as humans, and when they didn't meet their requirements, they were killed.
One of the slavery stations was Warsaw, Poland.
The Warsaw Ghetto was the largest of the Jewish ghettos located in the territory of General Government during the Second World War.
The Warsaw Ghetto was established by the Nazi German Governor-General Hans Frank on October 16, 1940.
At this time, the population of the Ghetto was estimated to be 440,000 people, about 38% of the population of Warsaw. However, the size of the Ghetto was about 4.5% of the size of Warsaw.
The ghetto was split into two areas, the small ghetto, generally inhabited by richer Jews and the large ghetto, where conditions were much worse. The two ghettos were linked by a single footbridge. The Nazis then closed the Warsaw Ghetto from the outside world on November 16, 1940, building a wall with armed guards.

Now, after reading all this information, we have lots of questions, like, what really happened at Warsaw?

At first, the Nazi forces took half of the ghetto to the extermination camps, and the jews
were afraid that the next time they will come, they will take the rest of the jews and send them to the extermination camps too.
Because of these actions, the jews decided to resist and to rebel against the Nazi forces. The rebellion was arranged by youth movement, and mainly by Mordechai Anilevich. Most of the rebels were 14-30 years old.
The rebels dag holes in the ground and hid food in there, while some of them bought weapons from outter organiztaions.

During the rebellion itself

On January 18, 1943, the Germans began their second deportation of the Jews, which led to the first instance of armed insurgency within the ghetto.
While Jewish families hid in their "bunkers," Germans and the Jewish Combat Organization fighters engaged in two direct clashes.
As a consequence, even as the jewish combat organization suffered severe losses (among them Yitzhak Gitterman), the deportation was halted within a few days, and only 5,000 Jews were removed instead of the 8,000 as planned by Globocnik.
There were hundreds of people in the Warsaw ghetto ready to fight, adults and children, scarcely armed with handguns and a few other weapons that had been smuggled into the ghetto.
Two resistance organizations, the Jewish Military Union and the jewish combat organization took control of the Ghetto. They built dozens of fighting posts and executed individuals who collaborated with the Germans, including Jewish Police officers, members of German-sponsored Żagiew organization and Gestapo agents (like Judenrat member Dr Alfred Nossig on 22 February 1943). The jewish combat organization established a prison to hold and execute traitors and collaborators.
Józef Szeryński, the former head of the Jewish Police, committed suicide.

The ghetto was almost wholly levelled during the uprising, however, a number of buildings and streets survived, mostly in the small ghetto, which had been closed earlier and wasn't involved in the fighting. The buildings on ul.Prozna are the original residential buildings that once housed Jews in the Warsaw Ghetto. The buildings have largely remained empty since the war and the street is the focus for the annual Warsaw Jewish Festival. Nearby, the Nozyk synagogue also survived the war, as it was used as a stables by the German Wehrmacht. The synagogue has today been restored and is once again used as a temple. The last remaining piece of the ghetto wall is at ul.Zlota 62. Unfortentualy, the jews got nothing out of the rebellion, but they did die in honour, fighting for their lives as a proud nation.

Well, after answering all the questions above, we understood what really happened at Warsaw during the holocaust, and we understood how important even it was. People who could have died as slaves, died in honor as fighters that love to live.

It would be a lie to say that I didn't enjoy to do the work.
I had a great time to tell the history of my nation, of the people who fought hard to save their lives,
even though they knew it was in vein. 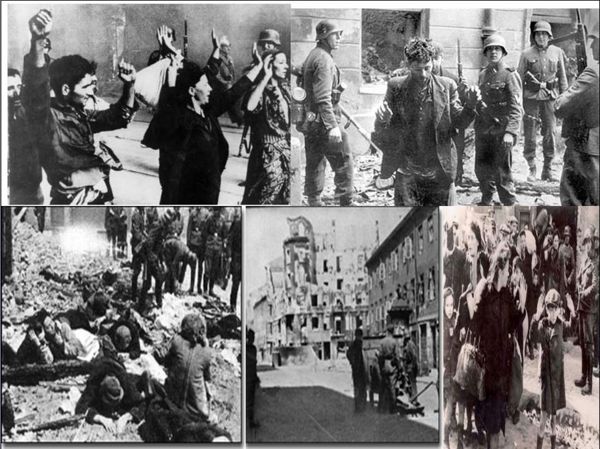 Yakir's documents from the holocaust.

So, in this project, we will answer all these questions (or at least try to)