An amazing machine! We are living in the computer age today and most of our day to day activities cannot be accomplished without using computers. Sometimes knowingly and sometimes unknowingly we use computers. Computer has become an indispensable and multipurpose tool. We are breathing in the computer age and gradually computer has become such a desire necessity of life that it is difficult to imagine life without it.

For most of the people, computer is a machine used for a calculation or a computation, but actually it is much more than that. PreciselyComputer is an electronic device for performing arithmetic and logical operation. Or “Computer is a device or a flexible machine to process data and converts it into information.”

To know about the complete process that how computer works, we will have to come across the various terms such as Data, Processing and Information. First of all we will have to understand these terms in true sense.

1.DATA: - “Data” is nothing but a mare collection of basic facts and figure without any sequence. When the data is collected as facts and figure, it has no meaning at that time, for example, name of student, names of employees etc.
2.PROCESSING: - ‘Processing’ is the set of instruction given by the user or the related data to output the meaningful information. Which can be used by the user? The work of processing may be the calculation, comparisons or the decision taken by the computer.
3.INFORMATION: - ‘Information ’is the end point or the final output of any processed work. When the output data is meaning it is called information.

Actually speaking electronic data processing does not go back more than just half a centaury i.e. they are in existence merely from early 1940’s. In early days when our ancestor used to reside in cave the counting was a problem. Still it is stated becoming difficult. When they started using stone to count their animals or the possession they never knew that this day will lead to a computer of today. People today started following a set of procedure to perform calculation with these stones, which later led to creation of a digital counting device, which was the predecessor the first calculating device invented, was know as ABACUS.

Abacus is known to be the first mechanical calculating device. Which was used to be performed addition and subtraction easily and speedily? This device was a first develop Ed by the Egyptians in the 10th centaury B.C, but it was given it final shape in the 12th centaury A.D. by the Chinese educationists. Abacus is made up of wooden frame in which rod where fitted across with rounds beads sliding on the rod. It id dividing into two parts called ‘Heaven’ and ‘Earth’. Heaven was the upper part and Earth was the lower one. Thus any no. can be represented by placing the beads at proper place.

As the necessity demanded, scientist started inventing better calculating device. In thus process John Napier’s of Scotland invented a calculating device, in the year 1617 called the Napier Bones. In the device, Napier’s used the bone rods of the counting purpose where some no. is printed on these rods. These rods that one can do addition, subtraction, multiplication and division easily.

In the year 1642, Blaise Pascal a French scientist invented an adding machine called Pascal’s calculator, which represents the position of digit with the help of gears in it.

In the year 1671, a German mathematics, Gottfried Leibniz modified the Pascal calculator and he developed a machine which could perform various calculation based on multiplication and division as well.

In the year 1833, a scientist form England knows to be Charles Babbage invented such a machine. Which could keep our data safely? This device was called Analytical engine and it deemed the first mechanical computer. It included such feature which is used in today’s computer language. For this great invention of the computer, Sir Charles Babbage is also known as the father of the computer.

As the time passed, the device of more suitable and reliable machine was need which could perform our work more quickly. During this time, in the year 1946, the first successful electronic computer called ENIAC was developed and it was the starting point of the current generation of computer

ENIAC was the world first successful electronic computer which was develops by the two scientists namely J. P. Eckert and J. W. Mauchy. It was the beginning of first generation computer. The full form of ENIAC is “Electronic Numeric Integrated And Calculator” ENIAC was a very huge and big computer and its weight was 30 tones. It could store only limited or small amount of information. Initially in the first generation computer the concept of vacuum tubes was used. A vacuum tube was such an electronic component which had very less work efficiency and so it could not work properly and it required a large cooling system.

The third generation computers were invented in the year 1964. In this generation of computer, IC (Integrated circuits) was used as the electronic component for computers. The development of IC gave birth to a new field of microelectronics. The main advantage of IC is not only its small size but its superior performance and reliability than the previous circuits. It was first developed by T.S Kilby. This generation of computer has huge storage capacity and higher calculating speed. 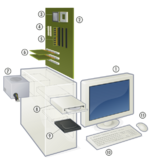 This is the generation where we are working today. The computers which we see around us belong to the fourth generation computers. ‘Micro processor’ is the main concept behind this generation of computer.

A microprocessor is a single chip (L.S.I circuit), which is used in a computer for any arithmetical or logical functions to be performed in any program. The honaur of developing microprocessor goes to Ted Hoff of U.S.A. He developed first micro-processor, the Intel 4004, as he was working for Intel Corporation, U.S.A with the use of microprocessor in the fourth generation computers, the size of computer become very fast and efficient. It is evident that the next generation of computer i.e. fifth generation will be developed soon. In that generation, computer will possess artificial intelligence and it would be able to take self decisions like a human being.