I am gradually uploading a paper based resource to improve pilot skills and enhance safety.

I hope it will be edited or used. 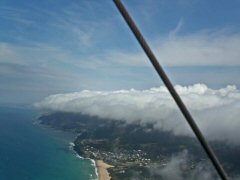 The Hang Gliding Federation of Australia HGFA under delegated authority from the Civil Aviation Safety Authority (CASA) controls the use of aircraft in Australia whose primary means of control is by weight shift.

These aircraft are inherently light weight and do not meet the airworthiness requirements laid down in the Civil Aviation Act, as those laws were fully intended to regulate commercial aviation for the protection of the fare paying public and the public in general.

Obviously, many sport aircraft do not meet these requirements laid down for larger aircraft and several associations have been formed to regulate the use of lightweight aircraft in Australia. These are:

All these bodies operate under delegated authority from CASA and are in effect regulatory authorities in their own right with distinct lines of jurisdiction, which limits overlap in their areas of control.

All these authorities are primarily concerned with safety both of their members and that of the general public who may come into contact with their operations either as passengers or as bystanders.

CASA will swiftly intervene if a threat to the non participatory public comes to their attention but for the vast majority of the time is quite happy to allow these associations to "run their own race" within set guidelines.

Each of these authorities has at different times had varying success in upholding safety standards within their chosen sport and are always attempting to improve in this area. Safety is a primary role.

Traditionally, certain members of clubs were rated as safety officers (SO) or senior safety officers (SSO). It was expected that the brunt of supervision of new pilots would fall on these individuals. These positions are purely voluntary and no remuneration can be accepted for this help.

In determining the aims of this training program I have consulted various individuals within the HGFA system, many of whom have participated in these formal roles and some who are of lesser experience and still benefiting from this assistance.

A major area of need appears to be some form of education to progress low airtime pilots who have recently completed their Restricted Pilot Rating safely through to their Intermediate and Advanced Ratings.

One factor supporting the need for such a program is the very high attrition rate of restricted pilots (only about 10% of new members progress past this stage and continue flying long term); this is largely put down to the difficulty in gaining experience in a safe environment quickly enough to not forget what you previously learnt.

The other major factor is the unacceptably high accident rate, which seems to on average lead to about two deaths a year in the sport in Australia from a pool of only about 3500 participants.

The aim of this program is to provide a training tool for delivery at club level by SO’s and SSO’s.

It is hoped that the long-term delivery of this material will lead to a reduction in our accident and fatality rates across the 3 separate types of aircraft flown by our members as well as a measurable increase in the retention of new members throughout our flying community.

There will be no short-term indicator of the success of this program but it is hoped that in the long-term delivery of this or similar programs will lead to a statistically measurable improvement in both member retention and accident rates.

This program is suitable for any HGFA member wishing to improve their flying skills and safety level. However the course material has been specifically selected to fill in gaps in the knowledge base of low airtime restricted or intermediate level pilots of any discipline (hang glider, paraglider or microlight).

This program deals with four main areas of competency:

This program is designed to be conducted over 4 club meetings or as 4 separate sessions run by a local club for improving pilots.

It is hoped that this program will accelerate pilot’s progress in the sport leading to improved safety and higher retention rates due to reduced frustration levels.

delivery of 4 sessions of 2 hours duration to provide some underpinning knowledge to back up pilots practical experience.

Whilst the initial session of this program would be helpful to any pilot, it would be beneficial to conduct a further training needs analysis prior to commencing the delivery of this training program.

Conducting a training needs analysis will further our aims in two distinct ways:

Our training needs analysis will have three distinct components:

Hopefully all information collected will be collated and kept for some time. To obtain maximum benefit this program would need to be conducted whenever a club receives an influx of new pilots. It is hoped this program would lead to a flow on effect in the level of mentoring to later new pilots and that this would eventually show as a differing response to later participant questionnaires.