coolanimation of what dna is. DNA stands for Deoxyrubonucliec acid. There are four monomer units of DNA called Cytosine,Guanine,Adenine and Thymine.

The genetic code is the set of rules by which information encoded in genetic material (DNA or mRNA sequences) is translated into proteins (amino acid sequences) by living cells. The code defines a mapping between tri-nucleotide sequences, called codons, and amino acids. With some exceptions,[1] a triplet codon in a nucleic acid sequence usually specifies a single amino acid. Because the vast majority of genes are encoded with exactly the same code (see the RNA codon table), this particular code is often referred to as the canonical or standard genetic code, or simply the genetic code, though in fact there are many variant codes. Thus the canonical genetic code is not universal. In humans, for example, protein synthesis in mitochondria relies on a genetic code that varies from the standard genetic code.

Not all genetic information is stored using the genetic code. All organisms' DNA contains regulatory sequences, intergenic segments, and chromosomal structural areas that can contribute greatly to phenotype. Those higher-level or epigenetic elements operate under sets of rules that are distinct from the codon-to-amino acid paradigm underlying the genetic code.

Remember DNA replication is when the DNA unzips (an enzyme does this) in two and gets copied before cell division (mitosis). This animation helps show what happens in DNA replication. The importance of replication is that each strand is used as a template for the other strand (look at the different coloured strands and note what is different about them). On the BLUE strand every C corrosponds to a G on the RED strand. This keeps the DNA sequence the same in both molecules, so when the cell divides each new cell has the same genetic information (DNA in the SAME sequence).

Remember DNA replication is when the DNA unzips (an enzyme does this) in two and gets copied before cell division (mitosis). This animation helps show what happens in DNA replication. The importance of replication is that each strand is used as a template for the other strand (look at the different coloured strands and note what is different about them). On the BLUE strand every C corrosponds to a G on the RED strand. This keeps the DNA sequence the same in both molecules, so when the cell divides each new cell has the same genetic information (DNA in the SAME sequence). 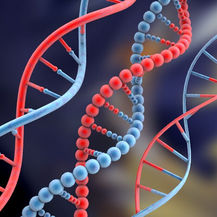 is the process of cell division that creates two genetically identical daughter cell. 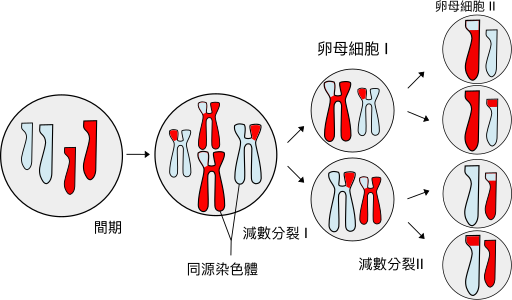 Mitosis is the process by which a eukaryotic cell

separates the chromosomes in its cell nucleus into two identical sets in two nuclei.[1] It is generally followed immediately by cytokinesis, which divides the nuclei, cytoplasm, or

ganelles and cell membrane into two cells containing roughly equal shares of these cellular components. Mitosis and cytokinesis together define the mitotic (M) phase of the cell cycle - t

he division of the mother cell into two daughter cells, genetically identical to each other and to their parent cell. This accounts for approximately 10% of the cell cycle.

Mitosis occurs exclusively in eukaryotic cells, but occurs in different ways in different species. For example, animals undergo an "open" mitosis, where the nuclear envelope breaks down before the chromosomes separate, while fungi such as Aspergillus nidulans and Saccharomyces cerevisiae (yeast) undergo a "closed" mitosis, where chromosomes divide within an intact cell nucleus.[2] Prokaryotic cells, which lack a nucleus, divide by a process called binary f

The process of mitosis is complex and highly regulated. The sequence of events is divided into phases, corresponding to the

completion of one set of activities and the start of the next. These stages are prophase, prometaphase, metaphase, anaphase and telophase. During the process of mitosis the pairs of chromosomes condense and attach to fibers that pull the sister chromatids to opposite sides of the cell. The cell then divides in cytokinesis, to produce two identical daughter cells.[3]

Because cytokinesis usually occurs in conjunction with mitosis, "mitosis" is often used interchangeably with "mitotic phase". However, there are many cells where mitosis and cytokinesis occur separately, forming single cells with multiple nuclei. This occurs most notably among the fungi and slime moulds, but is found in various different groups. Even in animals, cytokinesis and mitosis may occur independently, for instance during certain stages of fruit fly embryonic development.[4] Errors in mitosis can either kill a cell through apoptosis or cause mutations that may lead to cancer.

In biology, meiosis (pronounced en-us-meiosis.ogg maɪˈoʊsɨs (help·info)) is a process of reductional division in which the number of chromosomes per cell is cut in half. In animals, meiosis always results in the formation of gametes, while in other organisms it can give rise to spores. As with mitosis, before meiosis begins, the DNA in the original cell is replicated during S-phase of the cell cycle. Two cell divisions separate the replicated chromosomes into four haploid gametes or spores.

Meiosis is essential for sexual reproduction and therefore occurs in all eukaryotes (including single-celled organisms) that reproduce sexually. A few eukaryotes, notably the Bdelloid rotifers, have lost the ability to carry out meiosis and have acquired the ability to reproduce by parthenogenesis. Meiosis does not occur in archaea or bacteria, which reproduce via asexual processes such as binary fission.

During meiosis, the genome of a diploid germ cell, which is composed of long segments of DNA packaged into chromosomes, undergoes DNA replication followed by two rounds of division, resulting in four haploid cells. Each of these cells contains one complete set of chromosomes, or half of the genetic content of the original cell. If meiosis produces gametes, these cells must fuse during fertilization to create a new diploid cell, or zygote before any new growth can occur. Thus, the division mechanism of meiosis is a reciprocal process to the joining of two genomes that occurs at fertilization. Because the chromosomes of each parent undergo homologous recombination during meiosis, each gamete, and thus each zygote, will have a unique genetic blueprint encoded in its DNA. Together, meiosis and fertilization constitute sexuality in the eukaryotes, and generate genetically distinct individuals in populations.

In all plants, and in many protists, meiosis results in the formation of haploid cells that can divide vegetatively without undergoing fertilization, referred to as spores. In these groups, gametes are produced by mitosis.

Meiosis uses many of the same biochemical mechanisms employed during mitosis to accomplish the redistribution of chromosomes. There are several features unique to meiosis, most importantly the pairing and recombination between homologous chromosomes.

Cloning is the artificail production of a genetically identical individual.
Cloning is used to create the exact rep of an animal or plant species
This means that every single bit of DNA is the same between the two

What happens to the genes?

The genes transfer to the offspring, they are exactly the same as the cloned cell
they are the same size and have the same characteristics

The nucleus is removed then replaced by a new nucleus with a full set of chromosomes, the new egg is fused together with electricity. The egg is then placed in a surrogate mother to then grow to be born as anew organism with all the same traits and characteristics.

Using a gene gun is the most common method of GM. It works by attaching a segment of DNA to inert particles such as gold and then firing it into DNA which you want to be modified.
Genetic Modification is the use of modern biotechnology techniques to change the genes of an organism such as a plant or animal

The Techniques of removing, modifying, or adding genes to a DNA molcule (of an organism) in order to change the information it contains. By changing this information, gentic engineering changes the type of amount of proteins an organism is capabloe of producing, thus enabling it to make new substance or performing new functions

Traits from animals are chosen for breeding
offspring are vasrified by using the specific traitsthat the animals have.
You can use selective breeding in plants as well
They can be selected and bred for things like milk , meat and fur
Animals are also bred to withstand weather conditons
The DNA is held in genes which create the traits of the animal which are then chosen for breeding
Selective breeding is the process of reeding plants and animals for particular genetic traits
The selection of certain seeds or animals for reproduction inorder to influence the traits inherited by the next generation.