General use of Social Networking and Web 2.0 tools

Most of the youth, particularly students are already actively involved in using social networking and Web 2.0 sites for various purposes, content creation and conversation outside of the institutions. In one study to find out the effective and innovative use of Web 2.0 technologies for learning, students of ages 11 - 16 were surveyed. 74% reported that they had at least one social networking site account and 78% reported having uploaded pictures, video, or music to the web–with 50% having done so in the previous week. As most parents are still living in a Web 1.0 world, most youth are participating on the Web without the benefit of much guidance or mentoring from the adults.


The following Pie Diagram depics the purposes for which the Web 2.0 tools are being used by Student Teachers and Teacher Educators. 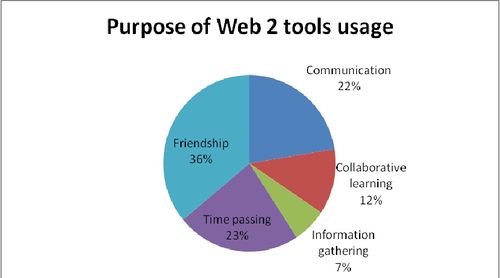 General Use of Web 2.0 Tools

The Web 2.0 tools are more far reaching an extensive medium of personal exchange. It has probably allowed many of its users to interact with many more groups of people disperse around the planet in time and space. All kinds of organizations can benefit out of them. The Internet Software Consortium reports that the growth of Web 2.0 tools is enormous and recently Web 3.0 an even Web 4.0 tools have evolved. The World Wide Web Consortium (W3C) also confirms that there are more than 100 Web 2.0 available now. The following table shows the popularity of Web 2.0 tools.

The members of various social networking sites use them mostly for the following purposes. 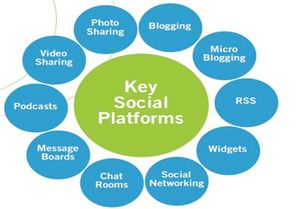