How to float an egg

A scientific method hand out will be given to students for them to make their hypothesis and observations. Figure 1 [[1]]

A chart is presented here (Figure 2) for the children to write down the object they are observing, their hypothesis, and the result. 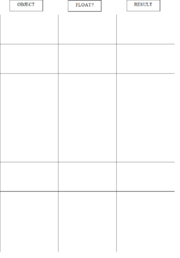 This lesson begins by exploring the concepts of density and buoyancy with an introductory "sink or float" activity. In this activity students will be asked to predict whether they think each of a group of small objects will sink or float. The objects we used for this activity are on the materials list. This gets students interested and asking the question "why do some objects sink, and others float?" Students will be asked to think about this question before being given an explanation.

This introduction is followed by an experiment. The experiment is a great example of instant gratification science! In this activity students will form a hypothesis about how many teaspoons of salt it will take to float an egg in one cup of water. The hypothesis is then tested and the results are analyzed. Be sure to tell students that it does not matter whether their hypothesis is rejected; all science is successful because knowledge is gained from a hypothesis that is rejected or supported.

The emphasis of this lesson is on formulating and testing of a hypothesis.

Hook: Sink or Float Activity: Hold up an object and ask students whether they think it will sink or float. Place the object in the clear plastic container filled with water for students to see if the object sinks or floats. Students can chart this activity. Have one column of the chart for the name of the object, another column for the student's prediction, and the third for the result. This can be repeated with multiple objects and should grab student's attention. The final object should be an egg (both hard-boiled and raw work, hard-boiled lowers the mess factor). The egg should sink and will then become the topic for the rest of the lesson.

Introduction: Talk with students about why they think some objects float and some do not. Ask students if they know of anything that can be added to the water to help make the egg float. Talk about density and buoyancy with students, explain that water has a density of one gram per milliliter and that objects with a greater density than one gram per milliliter will sink, and those with a lesser density will float. Explain to students about the Red Sea and how the high salt content increases the density of water.

1. Hand out the worksheet for the scientific method.

2. Have students fill out their observations of what happened when the egg was placed in the water. Brainstorm some observations as a group, and explain that an observation is objective.

3. Have students ask questions about their observation. The most important question for this activity should be: How many teaspoons of salt will it take to make the egg float? Students should be able to come up with a list of questions.

4. Explain that a hypothesis is a statement that predicts the answers to their question and can be tested in the experiment. Students should hypothesize the number of teaspoons of salt it will take to make the egg float.

5. Once everyone has formed a hypothesis, have students make a prediction. A prediction states that if __________ is true, then __________ will happen. For example, if a student predicted that one teaspoon will make the egg float they might predict that if the hypothesis is true, the egg will float after one teaspoon of salt is added to water.

6. Have students test the hypothesis. Place the egg in one cup of water. Add one teaspoon of salt at a time and stir. Keep adding salt until the egg floats.

7. Record the results and have students whether their hypothesis was supported or rejected.

Conclusion: Ask students to recall the parts of the scientific method. Ask them if they remember and understand why adding salt to the water made the egg float. Explain that the experiment is successful regardless of whether the hypothesis was supported.

There is also math involved in calculating the density of an object. These calculations are most effective older, middle school aged students. Density is the mass of an object in grams divided by the volume of the object in milliliters. Older students can practice measuring objects, calculating mass and volume. Students can then determine if the object will sink or float based on whether its density is greater or less than one gram per millilitre. This math connection gives students a very thorough and visual understanding of what density is.

This book is a good discussion started about sinking and floating. It is about a group of animals who decide to go for a boat ride and they get into the boat one by one, starting with the largest. The mouse sinks the boat. Ask students questions about why such a small animal sank the boat and if another animal could have done the same thing. This discussion can be progressed to asking about why some objects sink while others float.

This book has a discussion of the scientific method which is an appropriate connection to this lesson.

Be sure to have a good background in explaining density. It can be a hard concept for students to understand. The use of different objects in the first part of our lesson worked well because it got the children involved in what was the essential part of the experiment: the egg. A wide variety of objects is recommended. We used: a key, apple, marker, and a dime (Styrofoam is another good material). All of different weights, shapes and sizes leaving the kids very interested in whether or not they would float!

This website gave us the idea for this experiment.

Another sink or float lesson:

This activity worked very well for students in the third grade. For this age range, it is important to keep the focus on the scientific method. After performing the experiment using the scientific method, students seemed to have a better understanding of the steps of the scientific method than the definition of density, which was okay for our purposes. Students found it exciting when they saw that the experiment would be hands on. They seemed to enjoy being able to predict whether or not the object would float or sink. Because of this initial excitement, it is good to keep the eggs out of reach of students for the introduction of the lesson. Having objects within the students' reach was sometimes a distraction. Students also really enjoyed making predictions about what objects will sink or float, and the 'sink or float' activity was a way to evoke curiosity in students. It was also very fun to go into the students own classroom, rather than them coming to our school. This allowed the students to feel more comfortable around us and they were able to open up more easily. I think this a key aspect in the success of these lessons. The only problems that we encountered in our school had to do with language barriers. It was a very diverse school and we may not have had all the resources to accommodate all students.