The Flip Video camera is a digital camcorder created by a company called Pure Digital Technologies. It was the beginning of camcorders and was very popular among the users.It revolutionized the way videos were created and used. It turned people into videographers shooting their precious moments and sharing them. Flip made the hi-defination videos simple, affordable and portable. The beauty of Flip was in simple to use package. It was bought by Cisco Systems in March 2009 and in spite of its huge success Flip Video range was stopped in April 2011.Flip video was available in many variants like UltraHD, the MinoHD, and the SlideHD.Flip Video Ultra camcorder claims to be the simplest camcorder in the world recording videos in MPEG4 format. It has a 1.5-inch LCD display with with built-in flash memory of 1 or 2 GB. It was so popular and handy that it was proposed to be launched in India in year 2010.[1]But it was decided to be closed down by Cisco. One of the reasons argued was that phones were starting to shoot quite decent video and the need for a pocket camcorder becomes harder to justified [2]. 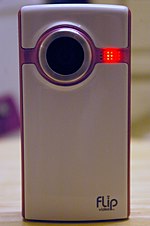 The Flip Video Ultra camera. The red light shows that the video camera is recording.

How it works? Flip video camcorder was an extremely easy device to use. It involved merely point ans shoot. The video was recorded in MP4 format and could be uploaded and shared with the world. The ease of video generation made it easy to be included in blogs and sites by the people. You can learn how to use flip camcorder through this Video.

Alternatives: In spite of its inherent strength as far as vieiography was concerned it was shut down. There are various other devices available which are discussedhere.

Back to Unit 2.4 Homepage
Retrieved from "https://wikieducator.org/index.php?title=Flip&oldid=788846"