Etherpad is a on line collaborative editor which supports real time editing. It allows authors to work simultaneously in collborative manner to edit a text document. All the authors can see each other’s edits in real-time. 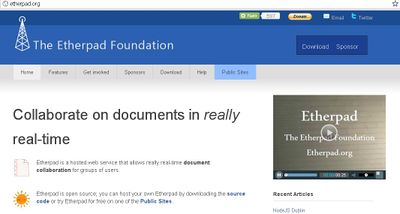 Etherpad was launched in November 2008 by David Greenspan, Aaron Iba, and J.D. Zamfirescu. Later Daniel Clemens and designer David Cole joined the team. The original website was launched as etherpad.com. After intial hiccups the software was acquired by Google and released as open source in January 2009.

Etherpad supports displaying each author’s text in his or her own color. (See the figure showing three people using Etherpad)There is also a chat box in the sidebar to allow synchronous meta communication. How it works You may acess the etherpad on http://etherpad.org/. Etherpad is open source software such as Mediawiki about which you studied in Unit 2.3. You can host your own Etherpad by downloading the source code and installing on your server. Another way is to try Etherpad for free on one of the public sites like etherpad.mozilla.org/ – an Etherpad hosted by Mozilla. More can be seen on public sites

Back to Unit 2.4 Homepage
Retrieved from "https://wikieducator.org/index.php?title=Etherpad&oldid=788074"