At the end of the Lesson the students should be able to:

The second law of thermodynamics can be expressed in terms of probability. The probability is related to order - disorder, and the entropy of a system is a measure of its randomness. That is, when thermal energy is added to a system, it becomes more random, more disordered. e.g When we boil a litre of water we can obtain five litres of steam which is obviously a more disordered state

The entropy change upon melting of ice was studied in lesson 4, example 1. An increase in entropy was found, and this means that the results of melting ice is more disorder. In solid ice the water molecules are in fixed positions of an ordered lattice, while in liquid water there is much less order. The water molecules are to some degree free to move about at random. The eq. (4.8), ∆fusS = (1/T<sub)fus</sub>∆fusH, expresses the balance between the tendency towards disorder and the tendency towards a low potential energy. In the ideal gas there are no forces between the molecules, therefore the condition of maximum probability is complete disorder. Whenever there are forces between molecules or particles, the condition of maximum probability is a balance between the two tendencies above.

Heat absorbed by the crystal leads to disorder, e.g., in form of vibrations. Atoms and molecules will increase their vibrations as temperature increases. Because of the vibrations atomic and molecular distances will fluctuate, and the crystal is more disordered. At the melting point the substance absorbs heat at constant temperature forming a liquid far less ordered than the solid. A still larger increase in disorder occurs at the boiling point. The temperature is obviously not a measure of disorder, since fusion and boiling, representing large increases in disorder, take place at constant temperature. Neither is the reversible heat absorbed, in itself, a measure of increase in disorder. This can be seen by comparing the vaporization process for different non-polar substances. The heat absorbed by going from liquid to gaseous state varies. It is reasonable to assume, however, that the increase in disorder would be very near the same. The change in entropy upon vaporization, ∆vapS = ∆vapH/Tb, according to eq. (4.6). Here ∆vapH is the enthalpy of vaporization and Tb is the boiling point. It has been shown experimentally that ∆vapS ≈ 88 J K-1 mol-1 for very many non-polar liquids (Trouton's rule). This demonstrates the very close relation between entropy and disorder. According to the postulate of the third law as expressed in eq. (5.1), we can obtain absolute values of the entropy for any element or compound by applying eqs (5.2 - 5..5). The situation near the absolute zero temperature needs special mentioning. At 0 K we have Cp = 0. The absolute value of the entropy when the crystal is heated from 0 K to T is obtained from eq. (4.3):

The lower limit of the integral when both Cp and T are equal to zero, can be shown to be zero. It has been shown theoretically that Cp is proportional to T3 at very low temperatures. This means that Cp approaches zero asymptotically when T approaches zero. As the temperature increases the crystal may go through transitions (trs) to different structures. At still higher temperature it melts, and finally it vaporizes. For a substance that goes through one transition before melting and vaporizing the entropy is:

The Cp functions are different for the different states. The changes in entropy given by eq. (5.2) are ilustrated in Fig. 5.1. 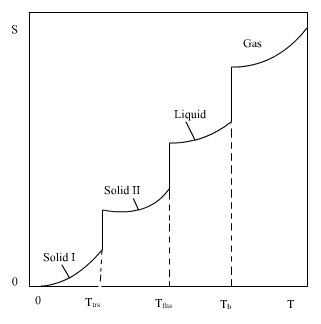 Fig. 5.1 The entropy of a substance (compound or element) as a function of temperature

The absolute entropy of elements and a large number of compounds have been obtained in this way and are listed in thermodynamic tables. The data refer to the standard state at 1bar pressure and 298 K temperature. Some values at 1 bar and 298 K are given in Table 5.1. 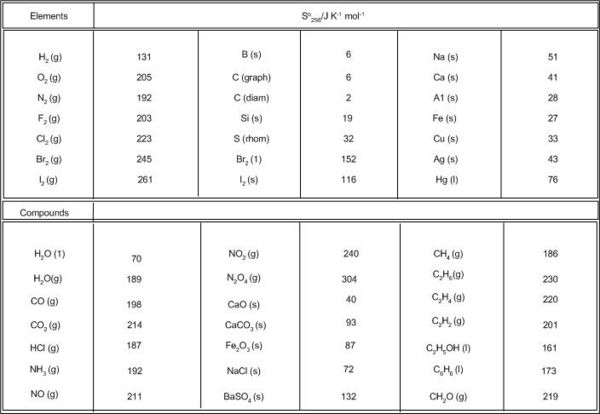 Note the higher values for the Gases which is also 'dependent' on their formula masses,and the very low values for the solids as expected since they are more ordered. The enthalpy of a system cannot be measured but only the difference. Therefore, an arbitrary zero value is assigned at 298 K and 1 atm. Any enthalpy change is then the difference relative to this zero. These standard entropy values are referenced to a true zero i.e at 0 K and therefore are absolute quantities, thus unlike most other thermodynamic quantities where at the standard state a value of zero is assigned entropy values are non zero.

When Chemical Reactions take place, the various elements are reorganised in the formation of products. This clearly results in a change in disorder (entropy). We can calculate this change since the entropies of the reactants and products are known and entropy as we found in lesson 2 is a state function. In this case therefore the change is obtained by summing up the entropy of the products (final state) and subtracting the sum for the reactants Sum (products) - Sum (reactants)

The entropy change for any cyclic process, reversible or irreversible:

For a reversible process:

For an irreversible process:

Calculate the entropy change for the reaction