Interpretation of Entropy and Calculation

After the study of this topic learners should be able to:

Calculate ∆So for any reaction from tabulated absolute entropy values So

We have now seen several examples of processes that occur spontaneously, some exothermic and some endothermic. In order to understand why spontaneous processes occur, let us consider the expansion of a gas into a vacuum at molecular level.

Fig 3.1 Expansion of a gas into a vacuum at molecular leve

We open the stopcock while maintaining the system at constant temperature(isothermal), what would you expect to happen? 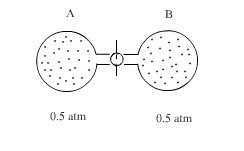 Fig 3.2 When the stopcock is opened

We know that the molecule of a gas are in constant motion and that they will move in to whatever space is available to them - gases expand to fill their containers.

The ideal gas expands spontaneously to occupy both flasks Aand B at a pressure of 0.5 atmosphere. Since this process is spontaneous, we might next enquire as to what property of the system has undergone a change.

During this constant temperature(isothermal) expansion into vacuum, the gas does no work (w=0)

Furthermore, because the internal energy and enthalpy of an ideal gas depends only on temperature and not on the gas volume or pressure which is constant during the process ∆E = 0 for the expansion. For the mixing of gases at constant temperature

The product Pv is the internal energy of an ideal gas. For an ideal gas Pv = nRt. If T is constant nRt is constant. The energy of the gas is therefore constant, so fo a change occurring at constant pressure ∆E = 0

We can relate the change in entropy to other familiar thermodynamics quantities especially the way it is related to heat transferred during the process. As explained earlier, entropy is a state function. however in order to understand the relationship between change in entropy and heat, we need to remember that heat is not a state function.suppose a system undergoes a process in which it changes from an initial state say state1 to a final state say state2. The heat transferred during the process,q, depends on the path we take from from state 1 to state2. To relate dS to heat q we need to consider a particular path from state 1 to state 2, namely a reversible path

At the end of the lesson the students should :

Entropy is studied under the second law of thermodynamics . An important part of chemistry is concerned with the state of equilibrium and the tendency of a system to move in the direction of equilibrium . The second law is concerned with the direction of spontaneous reactions and with equilibrium. Since both exothermic and endothermic reactions may proceed spontaneously, the driving force of a chemical reaction cannot be explained by the change of enthalpy alone. A process that occurs spontaneously involves a change of lower probability to a state of higher probability.

Before attempting this lesson students should be familiar with some language of thermodynamics which you learnt earlier on in the First Law of Thermodynamics.

The System and The Surroundings

Because we are interested in the heat given off by reactions it is very important to define the system that we are studying. In this way we can be sure exactly what we mean when we say, for example, that so many joules of heat have been given off - this amount of heat energy has left the system.

One way of summarizing what we have just said:

The Universe = The System + The Surroundings (3.2)