By the end of the lesson each student should be able to:

In the last lesson we explored the concept of entropy and developed a method of calculation of change of entropy during the isothermal expansion of an ideal gas. One issue that was raised and not fully settled was the proof to show that entropy is a state function that depends on the initial and final parameters that describe the system.

In the Carnot cycle we expose one mole of an ideal gas to reversible isothermal and adiabatic processes. The gas is placed in a cylinder with a piston. A pressure – volume diagram for the Carnot cycle is shown below 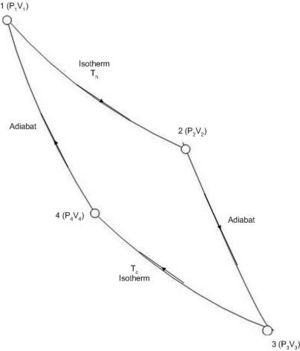 We shall bring about four reversible changes in the system to complete a cycle bringing it back to state 1.

For the two isothermal processes we have ∆U = 0 for an ideal gas, and qrev = - w. For the two adiabatic processes we have qrev = 0 and wrev = ∆U = Cv∆T. (For an ideal monatomic gas Cv does not change with temperature). The reversible work and heat for an isothermal process are obtained using eq. (1.6). The work and change in internal energy for an adiabatic process are obtained using eq.(1.31). The expressions for the four steps of the cyclic process are shown in Table 2.1. Table 2.1. Expressions for ∆U, qrev and wrev for the four steps of the Carnot cycle.

Table 2.1 Expressions for the cyclic process

From the equation for the reversible adiabatic expansion Of an ideal gas, eq.(1.28) we have for the step 2→3:

In a similar way we obtain for the step 4-1:

From the expressions for qrev in Table 2.1 and eq.(2.3) we obtain for the whole cycle:

For the entropy change for the whole cycle we obtain:

This is in agreement with the requirement for a state function. By the first law we have for the complete Carnot cycle:

The efficiency of the reversible Carnot engine can be defined as the ratio of the work done on the surroundings to the heat input at the higher temperature.

As a next step we shall investigate if eq. (2.5) is valid for any kind of system, e.g. a non-ideal gas, liquid, solid or a mixture of these.

The second law of thermodynamics may be stated in different ways. Here we shall use the statement by Clausius (1856): It is impossible to transfer heat from a cold reservoir to a hot one without at the same time converting an amount of work into heat. The second law is a postulate, it cannot be derived, but it is in accordance with our experience, that heat never flows spontaneously from a cold to a hot body. To obtain the entropy change for an arbitrary system we compare the changes in this system with those in the system of an ideal gas. Let us assume that we have two reversible Carnot engines working between the same two heat reservoirs at Tb and Tc. The engines are adjusted to perform equal amounts of work in a cycle. Suppose that the engines are of different efficiency, and arranged such that the more efficient engine,A, operates the less efficient engine, B, in reverse with no extra energy available. The engine operated in reverse takes heat from the cold reservoir to the hot reservoir. If engine B were less efficient,-w/qh,B < -w/qh,A or qh,B > w/qh,A, more heat would be transferred from the cold reservoir to the hot reservoir by engine B, than the heat transferred in the opposite direction by engine A. The net result would be the transfer of heat from the cold reservoir to the hot one without converting any work into heat. This violates the second law as stated by Clausius, although the first law is not violated. Thus, the efficiency of any reversible Carnot engine must be the same as that for the ideal gas reversible Carnot engine. Hence, for any kind of system the reversible Carnot cycle gives ∑(qrev/T) = ∑∆S = 0, according to eq. (2.5). Notice that ∑qrev is not equal to zero, since qrev is not a state function. 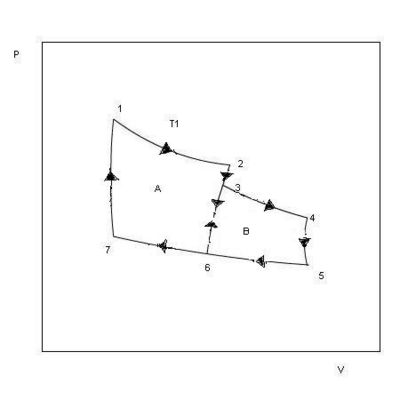 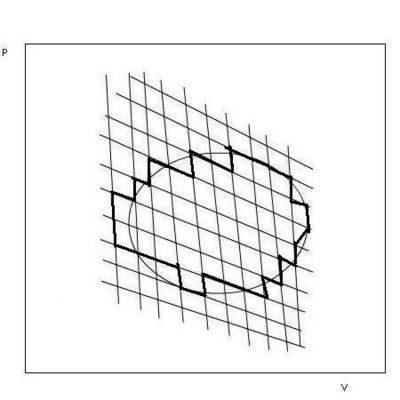 Fig. 2.3 An arbitrary cyclic process, reversible or irreversible, is approached by a sum of reversible isothermal and adiabatic processes
Retrieved from "https://wikieducator.org/index.php?title=EntropyLesson2&oldid=36114"