Capitol's Control Over Districts Through The Hunger Games

What is The Hunger Games?

Throughout the book, the readers see the Capitol continuing its psychological warfare with the twelve districts to enforce its laws, regulations and maintain the elite status of the Capitol and its ruling class (i.e. President Snow). The most noticeable propaganda include the Hunger Games. The game was introduced after the Rebellion of the thirteen districts against the Capitol around what used to be North America. As a result, District Thirteen was annihilated, it "still smoulders from toxic bombs", and the twelve surviving districts have to choose one male and one female tribute annually to contend in the games and bring about food and honour to their district.

How The Hunger Games is Used as Population Control

The Hunger Games serve to control the defeated districts largely in three ways.

It demonstrates the Capitol's schadenfreude characteristics, brutality and willingness to use force/violence to control a group. The Capitol forces tributes to kill each other in ancient gladiatorial manner. The tributes are to fight one another to survive in a large arena and bring glory to their districts. They must kill or be killed. There is no sympathy in the game, but only violence that the population of the Capitol demand. The thought of dieing a bloody death while the "crowd is urging on the killer" is sickening. This disturbing nature of the game is made worse by the fact that all children are eligible for the game "until they reach eighteen". Taking the children, only to lead them to their destruction, destroys the hopes and the futures of the families and the communities of those involved. This is "Capitol's way of reminding" people feel powerless and at their mercy. Simply put, it is Capitols way of saying 'We could have wipe you out and we still can, so you better keep in line'. 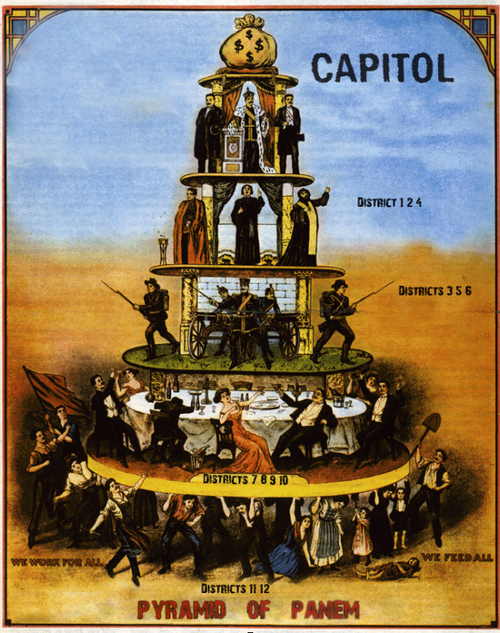 How The Hunger Games Provokes Hatred

It provokes hatred and distrust between districts and its members. The Hunger Games is a highly effective tool to prevent harmony and constructive teamwork. The game itself targets the most vulnerable between and within the districts. Comparatively wealthier industrious districts such as 1, 2, and 4 which are the "Capitol's lapdogs" have "Career Tributes" who are well-fed and better trained solely for the games. These tributes end up winning the game in most of the occasions. The winning district receives rewards in food and look down on the poorer districts whose tributes die bloody deaths. This helps to keep the wealthier districts in line as their schadenfreude is satisfied. Wealthier districts are the subject of hatred among the poorer districts which hardly manage to keep its population fed and starvation is common. For example, District 12, the poorest of all, has only had two victors in the history of the seventy four years of the game.

Hierarchy exists between members of a district as well. People who are poor and cannot afford to put food on the table signs up their child for what is called "Tesserae" who receive a few months worth of gain. However, in return, the child is entered into the draw for the Hunger Games tributes once more. This is in contrast to Madge, the daughter of Mayor Undersee of District 12, who never have to sign up for a tesserae and therefore minimize the chance of being selected for the feared Hunger Games. The mayor has a "passion for strawberries," when the majority of the population of his district are either starving or being, "blown to bits in mining accidents," such as was the case with Katniss Everdeen, who makes living from selling strawberries to the mayor. This unequal distribution of wealth and social statues serves to scatter the individuals of many districts apart from each other. It is an effective measure for Capitol to prevent a future rebellion as the level of hatred that exists between the members of the community that prevents cooperation thus negating any coordinated attacks on the Capitol.

The distrust and division created by the games also takes place on individual levels. Take for instance the people who take "bets on the two kids whose names will be drawn". Not only does these individual members make a mockery and entertainment out of people's misery, they are further dividing the community between those who are affected by the games and those who are not.

What ultimately is created from the Hunger Games is a hierarchy where most of the people in Panem have someone to make fun of or look down on. Apart from District 12, the rest of the people of Panem have other districts to laugh at. Relatively wealthy "lapdog" districts 1,2 and 4 have District 12 which is the "least prestigious, poorest, most ridiculed district in the country". This is crucial when a smaller population has to control a significantly larger population as it prevents people from challenging the ruling class. Why create rebellions and problems when they are already happy with what they have? The Hunger Games, which seem just a violent and sadistic event, that is a crucial tool in aiding the Government, the Capitol, to maintain firm unchallenged control over a 12 districts.