Purpose (What is Correlation?)

Correlation is a statistical technique to measure the relation between two or more variables. It can show whether and how strongly pairs of variables are related. For example, height and weight are related; taller people tend to be heavier than shorter people. The relationship isn't perfect. People of the same height vary in weight, and you can easily think of two people you know where the shorter one is heavier than the taller one. Nonetheless, the average weight of people 5'5 is less than the average weight of people 5'6, and their average weight is less than that of people 5'7, etc. Correlation can tell you just how much of the variation in peoples' weights is related to their heights. The measurement scales used should be at least interval scales, but other correlation coefficients are available to handle other types of data.

If there is no relationship between the two variables such that the value of one variable change and the other variable remain constant is called no or zero correlation.

What Does Nonparametric Statistics Mean?

Most commonly used statistical techniques are properly called parametric because they involve estimating or testing the value(s) of parameter(s)--usually, population means or proportions. It should come as no surprise, then, that nonparametric methods are procedures that work their magic without reference to specific parameters.

Nonparametric statistics have gained appreciation due to their ease of use. As the need for parameters is relieved, the data becomes more applicable to a larger variety of tests. This type of statistics can be used without the mean, sample size, standard deviation, or the estimation of any other related parameters when none of that information is available.

Scope and use of Nonparametric Statistics in Education

Non-parametric methods are widely used for studying populations that take on a ranked order (such as movie reviews receiving one to four stars). The use of non-parametric methods may be necessary when data have a ranking but no clear numerical interpretation, such as when assessing preferences; in terms of levels of measurement, for data on an ordinal scale.

A method commonly used in statistics to model and analyze ordinal or nominal data with small sample sizes. Unlike parametric models, nonparametric models do not require the modeler to make any assumptions about the distribution of the population, and so are sometimes referred to as a distribution-free method.

Typically, this method will be used when the data has an unknown distribution, is non-normal, or has a sample size so small that the central limit theorem can't be applied to assume the distribution.

Rationale and use of Nonparametric hypothesis testing

Contingency tables are used to examine the relationship between subjects' scores on two qualitative or categorical variables. For example, consider the hypothetical experiment on the effectiveness of early childhood intervention programs described in another section. In the experimental group, 73 of 85 students graduated from high school. In the control group, only 43 of 82 students graduated. These data are depicted in the contingency table shown below.

The first step in computing the chi square test of independence is to compute the expected frequency for each cell under the assumption that the null hypothesis is true. To calculate the expected frequency of the first cell in the example (experimental condition, graduated), first calculate the proportion of subjects that graduated without considering the condition they were in. The table below shows that of the 167 subjects in the experiment, 116 graduated.

Therefore, 116/167 graduated. If the null hypothesis were true, the expected frequency for the first cell would equal the product of the number of people in the experimental condition (85) and the proportion of people graduating (116/167). This is equal to (85)(116)/167 = 59.042. Therefore, the expected frequency for this cell is 59.042. The general formula for expected cell frequencies is:

The calculations are shown below.

The formula for chi square test for independence is

In a table with two rows and two columns, the chi square test of independence is equivalent to a test of the difference between two sample proportions. In this example, the question is whether the proportion graduating from high school differs as a function of condition. Whenever the degrees of freedom equal one (as they do when R = 2 and C = 2), chi square is equal to z². Note that the test of the difference between proportions for these data results in a z of 4.69 which, when squared, equals 22.01.

The same procedures are used for analyses with more than two rows and/or more than two columns. For example, consider the following hypothetical experiment: A drug that decreases anxiety is given to one group of subjects before they attempted to play a game of chess against a computer. The control group was given a placebo. The contingency table is shown below.

The chi square is calculated using the formula:

Median test is used for testing whether two groups differ in their median value. In simple terms, median test will focus on whether the two groups come from populations with the same median. This test stipulates the measurement scale is at least ordinal and the samples are independent (not necessary of the same sample size). The null hypothesis structured is that the two populations have the same median. Let us take an example to appreciate how this test is useful in a typical practical situation.

Example: A private bank is interested in finding out whether the customers belonging to two groups differ in their satisfaction level. The two groups are customers belonging to current account holders and savings account holders. A random sample of 20 customers of each category was interviewed regarding their perceptions of the bank's service quality using a Likert-type (ordinal scale) statements. A score of "1" represents very dissatisfied and a score of "5" represents very satisfied. The compiled aggregate scores for each respondent in each group are tabulated be given below:

What are your conclusions regarding the satisfaction level of these two groups?

The first task in the median test is to obtain the grand median. Arrange the combined data of both the groups in the descending order of magnitude. That is rank them from the highest to the lowest. Select the middle most observation in the ranked data. In this case, median is the average of 20th and 21st observation in the array that has been arranged in the descending order of magnitude. 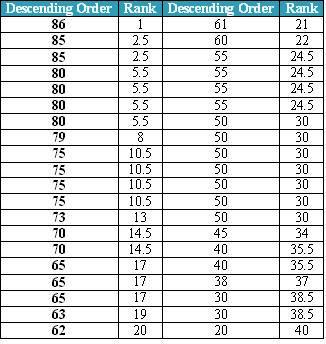 The test statistic to be used is given by

on substituting the values of a, b, c, d, and n we have

Critical chi-square for 1 d.f at 5% level of significance = 3.84 (click here for the table). Since the computed chi-square(0.90) is less than critical chi-square(3.84), we have no convincing evidence to reject the null hypothesis. Thus the the data are consistent with the null hypothesis that there is no difference between the current account holders and savings account holders in the perceived satisfaction level.

The Sum of Ranks Test