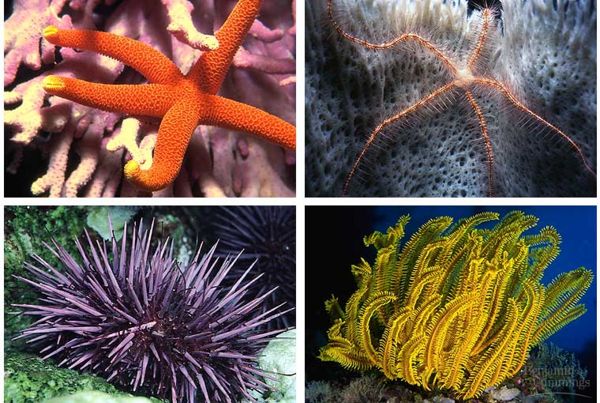 The phylum Echinodermata, which contains about 6000 species, gets its name from the Greek, literally meaning "spiny skin." This phylum exists exclusively in the sea and includes sea stars, urchins, brittle stars, and sea cucumbers. They are simple animals, lacking a brain and complex sensing organs. Echinoderms are characterized by their radial symmetry, water vascular system and internal skeleton.

The most striking feature of all echinoderms is their pentamerous radial symmetry. That is, the body can be divided into five parts (or appendages) which point outward from the center of the body. Interestingly, although most mature echinoderms are radially symmetrical, the larvae usually have bilateral symmetry. During the process of maturing, the echinoderm will change its body shape and settle down on the sea floor.

Another trait common to all echinoderms is their unique internal plumbing system known as the water vascular system. A hydraulic network of canals runs throughout the body, usually ending in a series of tube feet. By examining the ventral side of a sea star, for example, one will be able to see hundreds of tiny feet usually arranged into several rows on each appendage of the star. These are called tube feet. By varying the internal water pressure, the echinoderm can extend and contract its tube feet for locomotion, food collection and respiration.

Characteristic of all echinoderms is the presence of an internal skeleton covered with spines and skin. The skeleton varies with the type of echinoderms. Some echinoderms are carnivorous and scavenge the ocean floor. Certain species of sea stars actually extend their stomachs into their unwary victims in order to digest them. The feather stars and sea cucumbers are mainly filter feeders, and catch whatever they can find floating in the ocean currents.

Feather stars also known as crinoids. They are characterized by radial symmetry. The body of a typical feather star is cup-shaped, their numerous feathery arms project from a central disc. Some have five arms, others as many as 200. The arms, called pinnules are coated with a sticky substance that helps to catch food. There are appendages known as cirri attached to the underside of the body with which they cling to to sponges or corals. Both their mouth and their anus are situated on the upper side.

Ecology and range of feather stars

Feather stars are primarily nocturnal but they are seen in the open during the day with their arms rolled up. 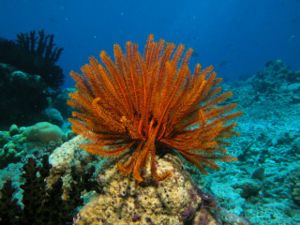 Feather stars can crawl, roll, walk and even swim but usually they cling to sponges or corals. Feather stars are very abundant in areas exposed to periodic strong currents, because they feed on plaktonic food.

Numerous animals live in close association with feather stars. Echinoderms are hosts to various symbiotic animals such as the crinoid clingfish (Discotrema crinophila), the elegant squat lobster (Allogalathea elegans) or the crinoid shrimp (Periclimenes sp.). These animals receive shelter and food (left over) and also feed on microorganisms living on feather stars. 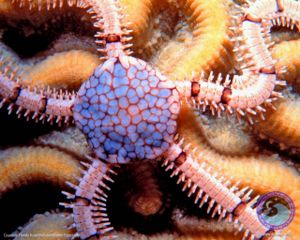 Brittle stars are close relatives of sea stars. Characterized by radial symmetry with a central body from which five snakelike arms protrude. The arms are highly flexible. There is no replication of internal organs, just one set in the central disk. Compared to starfish, brittle stars have a much smaller central disc and no anus. Wastes are eliminated through the mouth which is situated on the underside center. On the underside of the body disk there is a splitlike opening at the base of each side of each arm. These ten openings are breathing and reproductive outlets, taking in water for oxygen and shedding eggs or sperm into the sea. The basket stars are a specialized type of brittle stars. They have a series of complexly branched arms which are used to catch plankton. Serpent stars are seen coiled snakelike around branches of gorgonians

Ecology and range of brittle stars 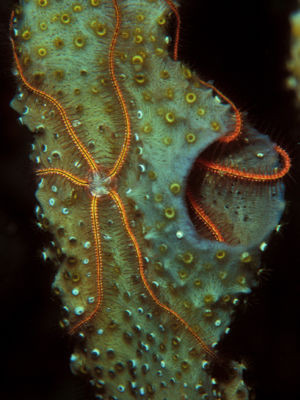 Brittle stars are very cryptic and hide in crevices under corals. Serpent stars feed mostly on small invertebrates like mollusks, worms and crustaceans and are generally found in crevices and beneath rocks or in holes in the sand.Snake stars (for example Ophiothela danae) are found entwined in the branches of black corals or gorgonians where they feed on the rich mucus of their host, in turn performing cleaning

The arms of the brittle stars are rather liable to break. This is actually an escape mechanism. Those arms regenerate quickly and an entire new organism can regenerate, if the broken arm is attached to a seizable portion of the disk. Brittle stars can reproduce asexually by self-division. Brittle stars are the most active and fastest moving echinoderms. 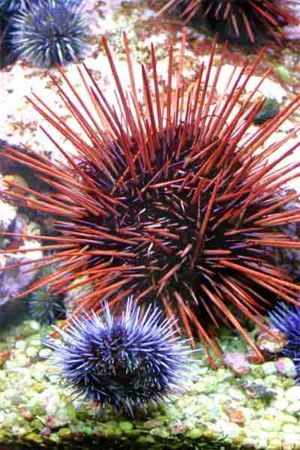 Ecology and range of sea urchins

Rubble and sand. An abundance of sea urchins can be a sign for bad water conditions.

Locomotion by tube feet but also by movement of the spines on the underside of the body. Sea urchins are generally nocturnal, during the day they hide in crevices. However some sea urchins such as Diadema sometimes form large aggregations in open exposed areas. Despite their sharp spines sea urchins are easy game for some fishes, particularly triggerfishes and puffers. Some sea urchins are camouflaged The sexes are separate and the young are formed indirectly by the fusion of sperm and eggs released into the water.

Unlike other echinoderms, holothurians don't have a distinct radial symmetry but are bilateral (distinct dorsal and ventral side). Holothurians are also called sea cucumbers. As their name suggests, they are cucumber shaped with an elongated, muscular, flexible body with a mouth at one end and the anus at the other. Around the mouth there is a number of tentacles (modified tube feet) used in food collecting. Sea cucumbers come in many sizes, from small species only a few centimeter in length to long snakelike animals which may stretch up to 2 meter!

Ecology and range of sea cucumbers

Rubble, rocks and sand. Also seen on some sponges in large aggregations.

Most species feed on the rich organic film coating sandy surfaces. The crawl over the bottom ingesting sand. The edible particles (organic matter such as plankton, foraminifera and bacteria) are extracted when passing through their digestive tract and the processed sand is expelled from the anus (as worm-like excrements). Sea cucumbers move by means of tube feet which extend in rows from the underside of the body. The tentacles surrounding the mouth are actually tube feet that have been modified for feeding. Other holothurians feed on current-borne zooplankton

Characteristics of sea stars (or starfish)

Sea stars are characterized by radial symmetry, several arms (5 or multiplied by 5) radiating from a central body. Mouth and anus are close together on the underside, the anus is at the center of the disc together with the water intake (madreporite). The upper surface is often very colorful. Minute pincer-like structures called pedicellaria are present. These structures ensure that the surface of the arms stay free from algae. The underside is often a lighter color.

Ecology and range or sea stars

The starfish lives everywhere in the coral reef and on sand or rocks.

The majority of sea stars are carnivorous and feed on sponges, bryozoans, ascidians and molluscs. Other starfishes are detritus feeders (detritus = organically enriched film that covers rocks) or scavengers. Some starfish are specialized feeders, for example the crown-of-thorns that feeds on life coral polyps. Starfish have no hard mouth parts to help them capture prey.

Starfish are well known for their powers of regeneration

The crown-of-thorns (Acanthaster planci) is one of the largest and the most venomous starfishes. It can reach 50 cm diameter and has numerous (10 to 20) spiny arms with formidable thorn like toxic spine.

Water vascular system is a hydraulic network of canals runs throughout the body, usually ending in a series of tube feet. By examining the ventral side of a sea star, for example, one will be able to see hundreds of tiny feet usually arranged into several rows on each appendage of the star. These are called tube feet. By varying the internal water pressure, the echinoderm can extend and contract its tube feet for locomotion, food collection and respiration

Sea stars typically possess five arms that grade into the central disc. The mouth is located in the center of the underside of the disc and the entire undersurface of the disc and arms is called the oral surface. The opposite, or upper side of the body, is the aboral surface that bears the anus and the ‘madreporite’, which is a small perforated plate through which water is taken into the water vascular system. The water is then directed into canals in the arms and then into the tube feet, which extend with the water pressure