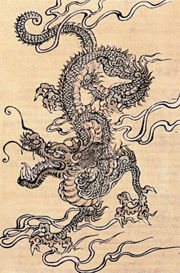 Dragons are one of the most well known mythical creatures on the earth. In almost every culture there are some depictions of dragons, while they can differ greatly, they all have some reptilian or serpentine similiarities, and usually with a certain level of magical powers. The word "dragon" has been derived from the Greek word δράκων (drakōn), which means a serpent of huge size, such as a python or dragon.

Dragons are usually depicted in the Western (mostly European) world as being large lizards with bat-like wings and that can breathe fire. These western dragons are usually malevolent or evil. In the Eastern places, such as the Orient, dragons are depicted as being serpents with four legs, usually good and with magical powers. In some cultures, such as ancient China, they were considered to be their gods, they can take on human form, and are usually benevolent.