A pointer is a variable which stores the memory address of another variable of same data type.

Let us try to explore this definition with a particular example :

int a = 32 ;// a simple variable being initialized with a value equal to 32
When the above line is being executed by the compiler, it will allocate the variable a with a random hexadecimal address say: 0x8fbffff4. This memory address will remain attached with the variable a till the variable is present in the program scope.

Try to Do:
Copy the above hexadecimal memory addresses and convert it using calculator program to its decimal form.
Write the decimal equivalent in your notebook. 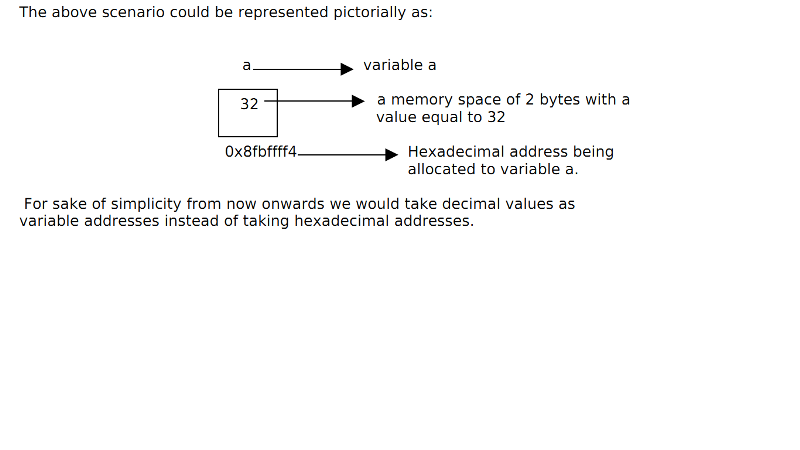 Let us try to sort out the answers of all of the above questions.Since a variable which is storing an address of another variable, must be a special one, so in C++ these variables are treated specially and are declared using special syntaxes.

A pointer declaration is similar to the declaration of a simple programming variable except that it is declared with a (*) asterisk symbol. The syntax is as follows :

Extracting Address of a simple variable :

One of the biggest question arises that : How to extract or find the address of a simple variable so that it could be assigned to a pointer variable. For This we have a special operator for this purpose i,e. ( & ) ampersand ( read it as address of operator ). This is a unary operator whose sole motive is to return the address of the variable which is present in the R.H.S of it.
Consider the following code :

The Line No. 1 of the above code snippet creates an ordinary variable a having an integer value equal to 20.