In reality, many ODL institutions deliver a range of products or services such as:

In order to make an accurate determination of the unit costs of these different products, it is necessary to identify all expenditure associated with each of them.

The Activity-Based Costing (ABC) approach was outlined briefly in Unit 4 in the context of assigning and attaching overheads to different products or services. It is based on the assumption that cost objects cause particular activities (or work) to be carried out. These activities, in turn, incur costs. An ABC exercise involves first identifying and analysing all costs associated with an activity and then assigning and attaching these to the cost objects.

Because the multiple functions of ODL institutions result in a range of outputs, it is necessary to identify all of the cost objects it produces and arrange these in a classification scheme, referred to as a taxonomy. Since some cost objects (such as study guides) are only part of larger cost objects (such as subjects or courses), they are normally arranged hierarchically. This means that they are ranked in order from specific to general or from simple to complex. Such a hierarchical taxonomy of cost objects is a useful starting point for an ABC analysis of what is produced by ODL institutions.

Figure 5a provides an example of a hierarchical taxonomy of cost objects at the Namibian College of Open Learning (NAMCOL). It resembles a pyramid laid on its side and is divided into five columns, each one representing a different level in the hierarchy: 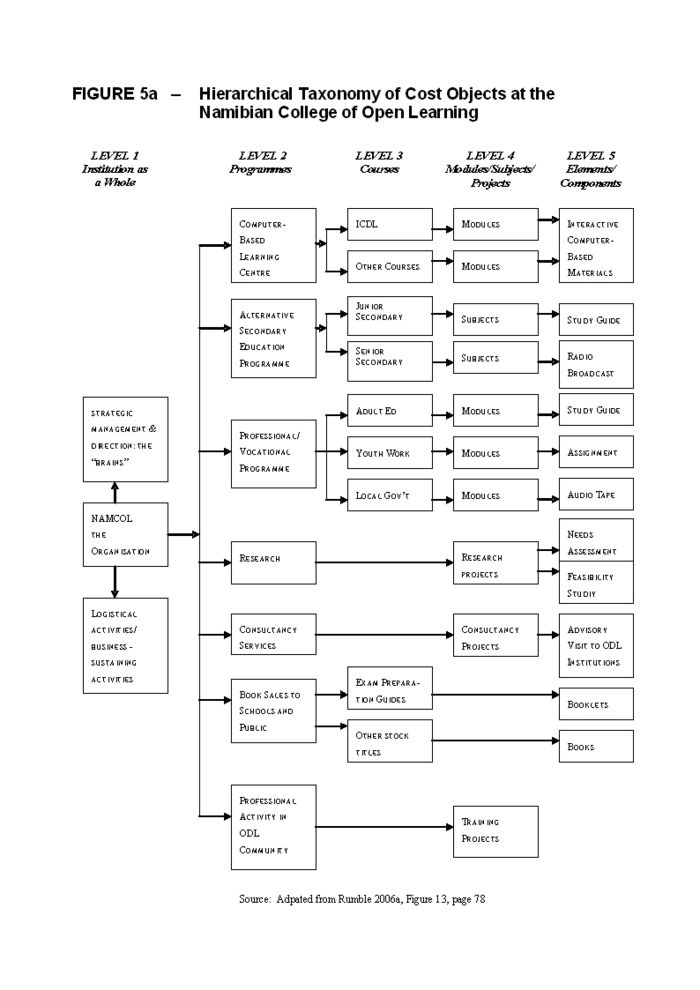 On the left-hand side of the diagram is a box representing the organisation as a whole, with its regulatory and logistical sub-systems above and below. At the next level to the right are the various programmes or other major areas of activity, including NAMCOL’s Computer-Based Learning Centre, the Alternative Secondary Education and Professional/Vocational Programmes, research and consultancy services, its Bookstore operation and other professional activities in the wider ODL community. These programmes and activities comprise individual courses (such as the ICDL - the International Computer Driver’s Licence) or publication series (such as NAMCOL's Exam Preparation Guides). Each course or activity at Level 3 is made up of modules, subjects or specific projects. Finally, at the lowest level of the hierarchy are the various elements and components, including study guides, audio cassette tapes, radio broadcasts, interactive computer programs, etc. The cost objects at Level 5 are so numerous that not all of them can be shown in this diagram.