The term cost allocation refers to the process of assigning or attaching costs to the product or activity they ‘belong to’. Allocating the direct costs of providing an ODL course is relatively easy and straightforward since, by definition, these can be directly related to the products that generate such costs. However, where the relationship between a particular item of expenditure and the institution’s programmes or other services is not so clear, the process of cost allocation becomes more difficult.

In traditional systems of cost accounting, overheads are first divided up and then added in to the expenditure for producing different goods or services. Cost apportionment refers to the process of dividing costs between two or more products in proportion to the estimated benefit received by each. The term cost absorption is used to refer to the final step of the process whereby apportioned costs are attached to a particular product and are ultimately reflected in the price charged for it (Rumble 1997, page 52). The traditional approach to assigning overheads is illustrated in Figure 4a: 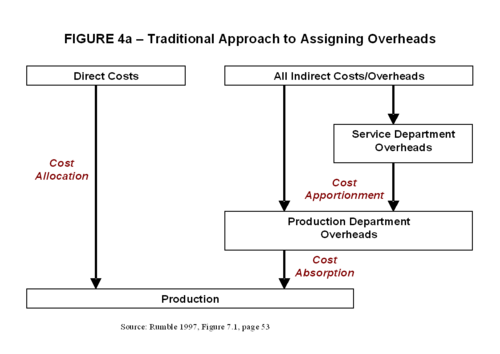 This exercise highlights how the traditional approach to assigning overheads to products can create a distorted and misleading picture of where indirect costs are incurred. Even though it takes only half as much time to inspect the electric kettles (10 hours per batch) compared with the toasters (20 hours per batch), the former product must absorb more than 60% of the total cost of inspection. This is because inspection overheads are apportioned on the basis of direct labour costs, which are higher for producing kettles, regardless of the fact that they are cheaper to inspect.